WKU gets tougher on tailgating activities 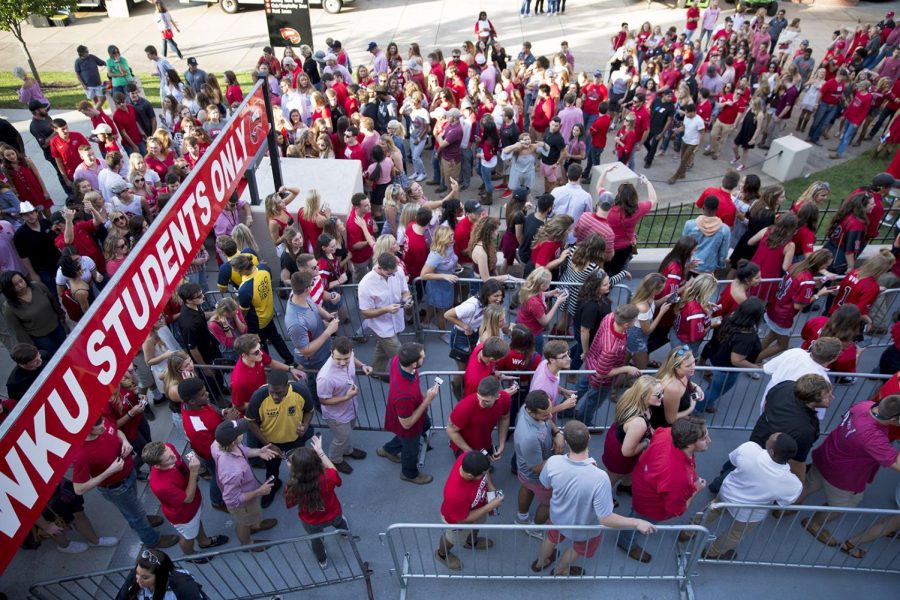 WKU students rush to Houchens Stadium after tailgating ended, Saturday, Sept. 2, 2017. Tailgating was once held in "the Valley" but has since been moved to the bottom of the hill due to the construction of Hilltopper Hall.

WKU has shown an increased focus on ending underage drinking at tailgates this semester, according to university administrators.

Brian Kuster, vice president for student affairs, expressed concern with how students have handled themselves during pre-game tailgates so far this football season.

“We’ve really taken a hard look at the tailgating, especially that’s happening now down at [Zacharias] and Meredith [Halls], because it’s really become a field party as opposed to a pre-game function, so I have a lot of concerns for student safety,” Kuster said.

Multiple students were arrested for underage drinking during the pre-game tailgate before last Saturday’s football game against Louisiana Tech.

Kuster said tailgating at WKU has become “out of control.”

“That’s not the type of atmosphere that we want for our students and again, I think it’s putting students in danger,” Kuster said.

Kuster said he has contacted Charley Pride, director of student activities, and spoken to him about possible ways to alter the current tailgating atmosphere, such as giving students free food.

Kuster reiterated multiple times he wanted tailgating to be a “pre-game function” instead of a “field party.”

Kuster said the atmosphere will change when WKU and students work together to “create a better environment for this kind of a function.”

“There was a lot of people this past weekend who had bottles and open cans,” Kuster said. “We do have a policy about using cups and no glass, and I think holding people accountable and making sure they understand here’s what the expectations are. And again, I think the students, most will see that’s not the appropriate form of pre-game activity.”

Kuster said the difference between other schools with larger, more extravagant tailgates and WKU is other schools’ stadiums are not on campus, so their tailgating can be done in parking lots, or they are in much better spots on their campus to tailgate.

WKU chief of police Mitchell Walker also said tailgating was a safety issue and the WKU Police Department would use discretion when enforcing laws, including drinking underage.

Kuster also said part of the way to change the condition of tailgate is to set high expectations for students.

“It should be a pre-game function, and you come down and tailgate before the game and go to the game, and that’s not what we have today,” Kuster said.

On Wednesday, Dean of Students Lynne Holland sent an email to all WKU students about tailgating activities.

“Tailgating on home football games is an opportunity for you and other members of the WKU Family to show your support for the Hilltoppers and socialize with friends prior to a football game,” Holland wrote. “Tailgating is a pre-game event on our campus, as it is on other campuses. Tailgating is not a license for alcohol abuse. WKU enforces the state law regarding underage drinking.”

Holland’s email said if a person under the age of 21 is drinking on campus, they are subject to “University sanctioning and arrest,” and officers from the State Alcohol Beverage Control Board would “likely be on campus and looking for illegal underage drinking.”

“We will not let a few individuals who only want to drink ruin the festive atmosphere we are trying to create,” Holland wrote. “The University is committed to making the campus a safe, wholesome, clean environment for all students, families, and fans at all times and during events.”