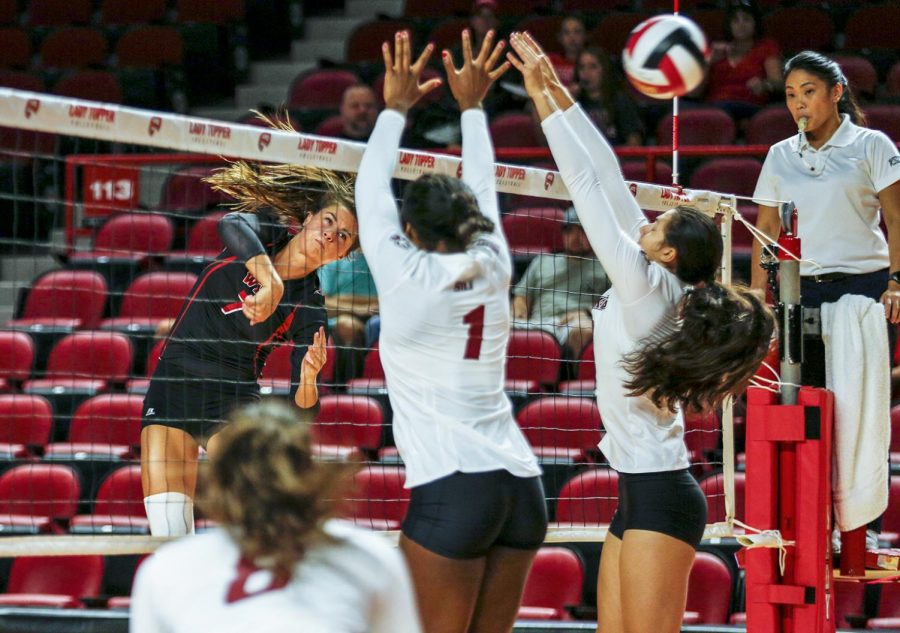 Senior outside hitter Alyssa Cavanaugh, returns the ball over the net in WKU's game against Southern Illinois University on September 9, 2016.

The Lady Topper volleyball team picked up three crucial wins and made a little history doing so this weekend as they swept a three-match slate in the Buckeye Invitational at Ohio State University.

The opening day of the tournament was highlighted by WKU’s 3-0 win over the host No. 25 Ohio State, which marked the first sweep of a Top 25 opponent in program history.

In the first match, the Lady Toppers (13-2) blistered the Buckeyes with 45 kills on a .506 hitting clip as a team. Rachel Anderson had 12 of those kills while Alyssa Cavanaugh added 11, both hitting at a .429 clip.

The WKU defense shined in the afternoon match against Dayton, where the Lady Toppers picked up a 3-1 win.

Kowalkowski led the team with 13 digs while Lucas, Hallie Shelton and Darby Music all tallied 10 a piece while helping hold the Flyers to just a .094 hitting percentage.

“I’m really proud of our effort today,” WKU head coach Travis Hudson said on Friday evening. “We played two high-quality teams that we have a lot of respect for in Ohio State and Dayton.”

WKU finished off the weekend with a 3-0 sweep of Northern Illinois on Saturday afternoon.

“This was a great way to finish off the weekend,” Hudson said on Saturday. “Northern Illinois plays the game very hard and we had to match that effort level to be successful today. I’m very proud of the way our kids competed this weekend.”

The Lady Toppers hit .384 as a team in the tournament while holding opponents to a .178 hitting percentage.

Anderson earned Buckeye Invitational MVP after leading the team with 43 kills and nine blocks for the tournament. Lucas and Cavanaugh both picked up All-Tournament honors.

The Lady Toppers will get a six-day break before beginning Conference USA play at Florida Atlantic on Friday evening.