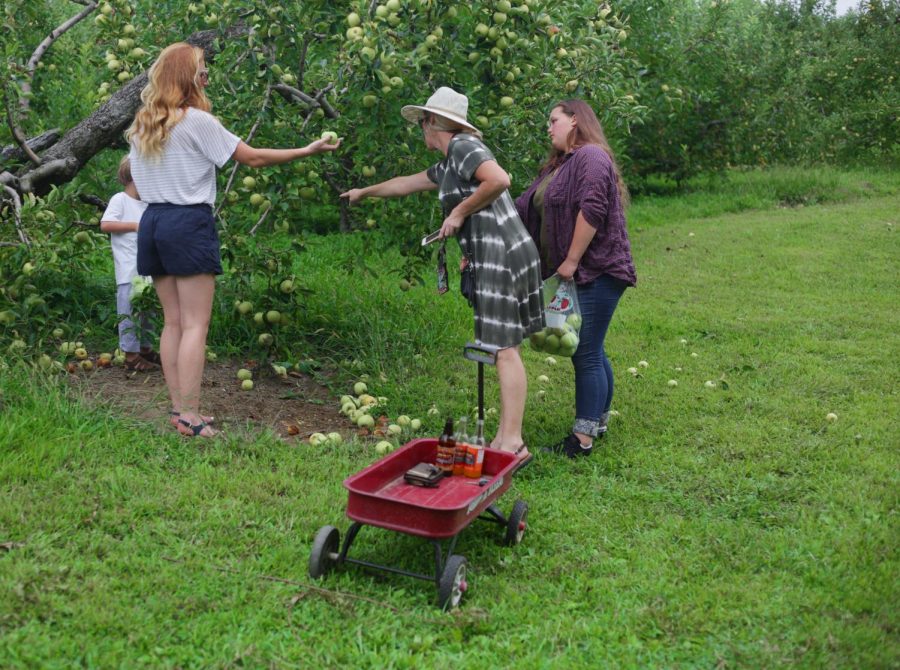 The Rogers take their Sunday to pick apples in the vast rows of the trees at Jackson's Orchard. "This is the first time we've ever participated in Apple Fest, but we are having a great time and will for sure come again next year," Theresa Rogers said (middle).

Jackson’s Orchard held Apple Fest over Labor Day weekend, an event to celebrate the transition to fall and debut all of its apple-related products. Apple Fest included apple picking, where participants were invited to harvest their own apples.

Cassie and Adam Dawson drove from Benton, Ky., roughly a two-hour commute, to attend Apple Fest. They heard about the event through Facebook, and they decided to take a day-trip to Bowling Green to check it out.

“I love fall festivals,” Cassie said. “We came to get lunch, and the food was really good. Our favorite thing we tried was the apple cider slushies.”

Cassie and Adam don’t have kids, but the two appreciated the unique playground equipment. The playground at Jackson’s Orchard is open to children ages 4-18 for $2 per child. Some of the equipment is made from tractor parts, or materials found on the farm, which Cassie and Adam thought was neat.

Joy Graham, an employee at Jackson’s Orchard has been selling apples since she was 11.

“We weren’t expecting so many people, especially after 11 inches of rain,” Graham explained.

The event was scheduled the Saturday after Bowling Green experienced flooding, making transportation difficult in some parts of the city. Usually the transition from summer to fall is one of Jackson’s Orchard’s busiest times.

One of the most popular products offered during Apple Fest are the caramel apples, which had not been available prior to Sept. 2. In addition to caramel apples, Jackson’s Orchard has now made apple cider, cider slushies, fried apple and peach pies available.