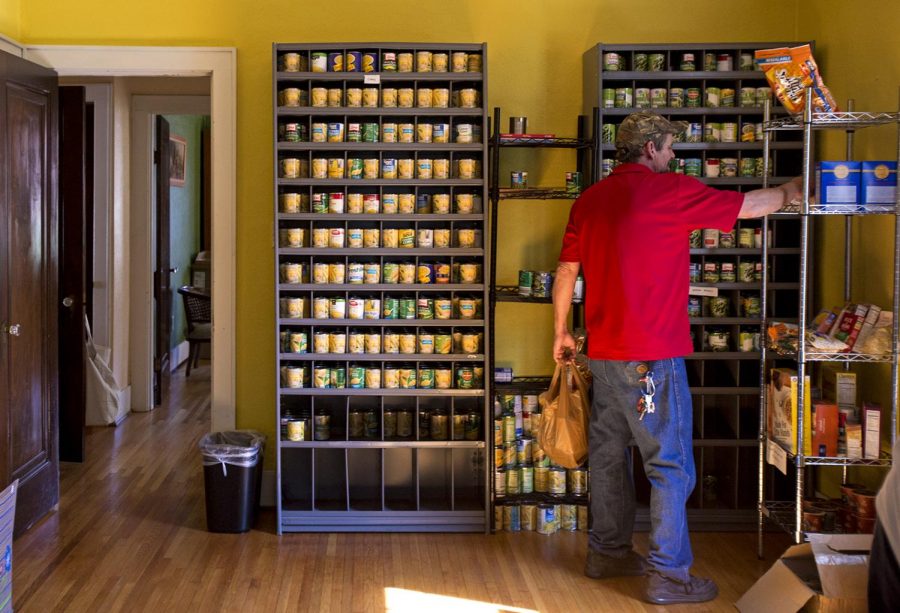 Johnny Brown collects food from the food pantry at WKU's Office of Sustainability Friday, Sept. 15. After the high demand for the original food pantry, a new one is being started on South Campus.

A second food pantry at WKU has opened on South Campus to better serve students, faculty and staff at that location.

Debra Hall, an office coordinator and administrative assistant in the School of University Studies, said the food pantry has been open since June. South Campus has had the idea for a while now and has been working on the project for about six months, Hall said.

Although the Office of Sustainability already has a food pantry on WKU’s main campus, South Campus decided to open a new one to accommodate students and faculty who are usually at South Campus location.

“It’s a known fact that many people are facing hunger, and that includes students, faculty and staff,” Hall said. “We hope that the food pantry will assist those who face hunger with an option to find a meal. This kind of opportunity needs to exist for all WKU students and staff.”

Although Hall did not initiate the project, she and several South Campus student workers have taken it on. Currently, they are working with the Office of Sustainability to make the two pantries a “joint effort” and possibly host a joint food drive in the future.

Freshman Sabre Semrau, who is involved with many of the Office of Sustainability’s organizations, recently prepared a food drive in Minton Hall for the main campus food pantry. Semrau said, “The generosity and positive feedback” was encouraging, and she thinks a dual food drive could bring attention to the South Campus food pantry.

“A joint food drive will be able to reach a much larger audience and hopefully receive even more donations than a solitary one would,” Semrau said.

There is no set date for the food drive yet, but any information regarding it will be posted on the Office of Sustainability’s web page, which now holds a section for the South Campus food pantry.

The second food pantry is located in room C231 on South Campus.

Its current hours are 8 a.m. to 5 p.m. on Monday through Thursday and 8 a.m. to 4 p.m. on Fridays. Hall said the food pantry will set formal hours in the future, which will be updated accordingly on the web page.

Both food pantries accept donations and a list of needed items can be found on the web page as well. Items like canned chicken, rice and pasta are currently listed as the top needed items.

Although Hall said the specifics of the food pantry are a “work in progress,” the mission of the South Campus is clear.

“As part of the WKU Community, we need to recognize that there is a broad spectrum of students and faculty and staff that need a meal sometimes,” Hall said. “It may be once, it may be many times, but as a community we need to make our resources available to all who have a need without placing judgment.”

Reporter Adrianna Waters can be reached at 270-745-6011 and adrianna.waters4[email protected]