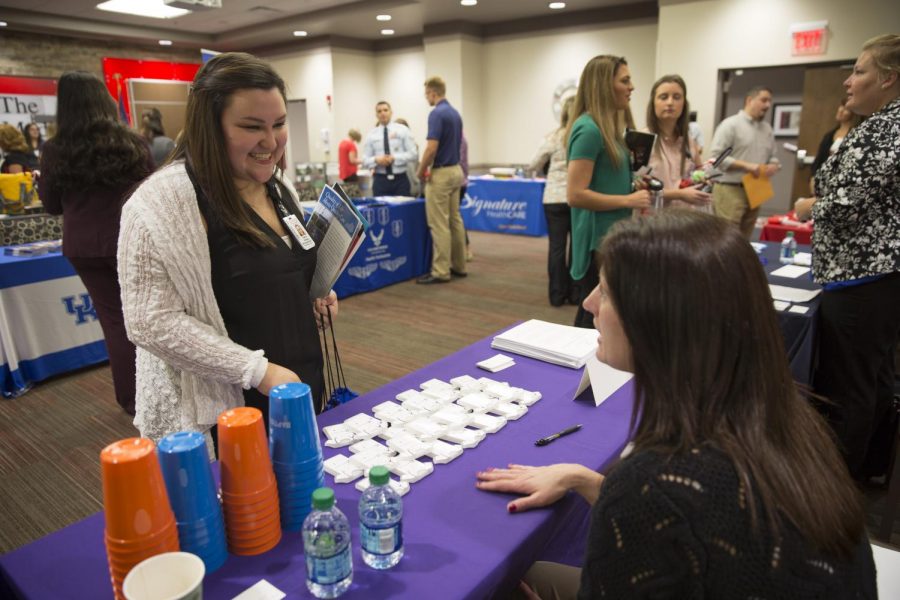 Valerie Noriega, a WKU Nursing student, talks with a representative from Baptist Health Louisville at the Fall Nursing Recruitment Job Fair Friday, Sept. 15. "The event fair is helping me decide what opportunities are out there," Noriega said.

The WKU Nursing Recruitment Fair was in the Health Sciences Complex, where most of the nursing classes have been held since 2013.

Twenty-seven employers, including hospitals and military branches, attended the recruitment fair, which held early in the year to offer a wide range of opportunities to job-seeking nursing students before they graduate.

The recruitment fair has taken place every semester since Fall 2015. Sherry Lovan, BSN Program Coordinator, said she started the fair in response to overwhelming requests from employers wanting to speak to graduating classes because of a nursing shortage nationwide.

The recruitment fair was only open to graduating nursing students, who were all part of a leadership class. “We talk about a lot of things like leadership styles as well as things that they have to do to get ready to enter nursing practice, which is a big change from being a student,” Lovan said.

The Nursing Recruitment Fair is one of only two recruitment fairs that are closed to graduating classes. The other one is the Physical Therapy recruitment fair, which will be held for the first time later this fall.

Space was limited to keep the employer-student ratio from being too close, Rachel Jones, the Employer Relations Specialist at the WKU Center for Career and Professional Development, said. “You don’t want to have too many employers and not enough students so we have to keep that in mind for this fair since there’s only 62 students,” she said.

The Nursing Recruitment Fair is powered by the WKU Center for Career and Professional Development, which also organizes job recruitment fairs for other WKU departments. The annual all majors Career Fair is coming up on Oct. 18 from 12 p.m. to 3 p.m. on the third floor of the Downing Student Union. The center will also be holding fairs for individual colleges and programs in the spring.

Interested students can find out more about upcoming career fairs and other services offered by the Center for Career and Professional development on their website at www.wku.edu/career.