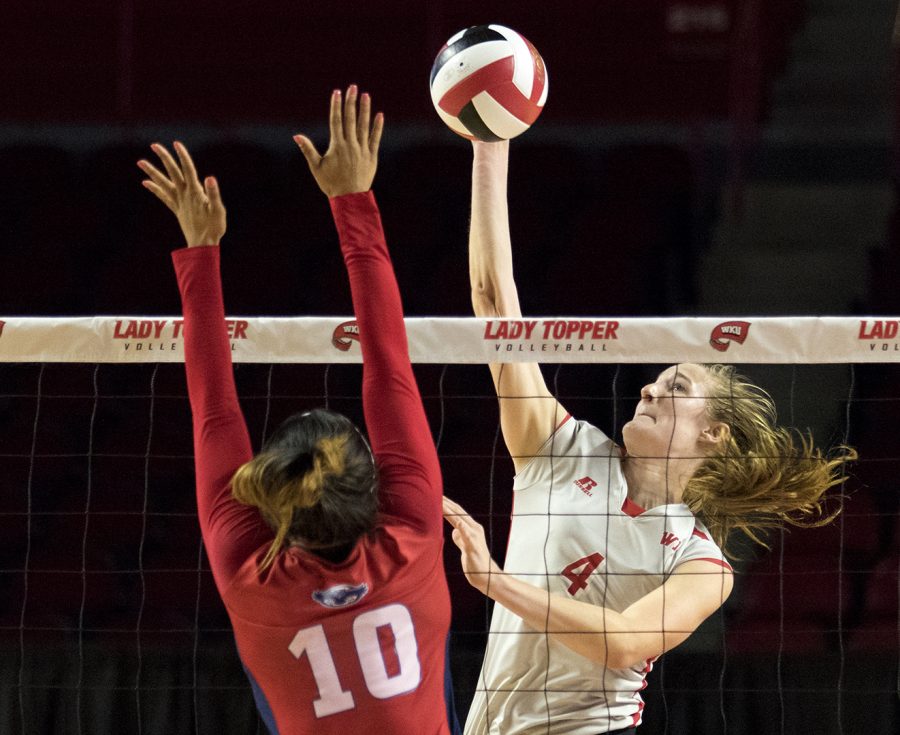 WKU kept its offensive attack rolling on Tuesday evening, finding the floor early and often on their way to a 3-0 win over Belmont in Nashville.

“Belmont is a difficult team to prepare for,” WKU head coach Travis Hudson said. “They are well-coached and they play very hard. We had to fight back tonight but we made enough plays to come back to Bowling Green with a win.”

Leading 14-6 in the first set, Alyssa Cavanaugh picked up a service ace to force Belmont (5-3) into a stoppage before the Lady Toppers cruised to 25-16 victory in the set.

WKU jumped out to a quick 8-2 lead in the second set, but the Bruins erased the deficit by tying the Lady Toppers 16-16 later on.

After both teams traded points, WKU struck for three straight points to force Belmont into another timeout before the Lady Toppers closed the set 25-22 thanks to a Belmont service error.

The Bruins jumped out to a 5-2 lead in the beginning of the third set before the Lady Toppers came from behind to tie the score at 14. WKU proceeded to score eight of the next 10 points on the way to a 25-19 win to seal the match.

Rachel Anderson led the Lady Toppers (6-2) with 11 kills while Alyssa Cavanaugh followed up with 10 kills of her own.

As a team, WKU out-killed the Bruins 37-35 while committing only six errors to Belmont’s 22. The Lady Toppers posted a .369 hitting clip on the night while holding the Bruins to a .131 percentage.

WKU returns home this weekend to host the Holiday Inn University Plaza Invitational, highlighted by Friday games against East Tennessee State and Pittsburgh and a Saturday matchup against Saint Louis.