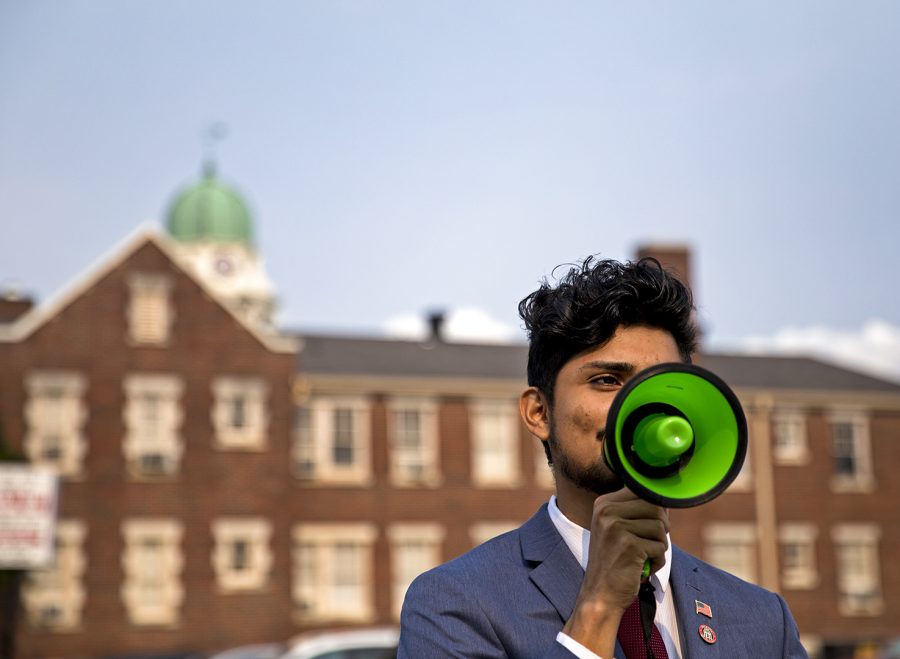 Francisco Serrano, a junior from Bowling Green leads the march in protest of Trump’s decision to end DACA on Tuesday. Serrano says the people on DACA want to do nothing more than contribute to America. “Many of them are students, many of them are tax paying workers and they just want to be able to live the American dream.”

WKU and Bowling Green community members participated in a march on Tuesday afternoon, showing support for Deferred Action for Childhood Arrivals, or DACA, which has recently been suspended by President Donald Trump.

“Blacks, Latinos, Asians, Whites; we all stand up for human rights,” junior and Bowling Green native Francisco Serrano said as he marched down College Street in a dark suit with a megaphone in hand.

Behind him, a crowd of people, some holding signs, some with raised fists, echoed his sentiments as they followed his step.

“This is what democracy looks like,” he, then they, shouted next.

On Tuesday afternoon, students, faculty and community members marched from Cherry Hall to Senator Rand Paul’s office in support of DACA. The march, organized by Serrano, coincided with President Trump’s decision to end DACA, the program that protects young immigrants from deportation and allows them to work legally. DACA began as an executive order in 2012 by then-President Barack Obama.

Serrano was motivated to organize the march as he noticed similar events happening in cities around the country. For some WKU students, the reason to march was personal.

For Ariana Paloma, a junior from Williamstown, participating in the march was for family and friends who were enrolled in DACA.

“This is their dream, and it shouldn’t be destroyed,” Paloma said.

Serrano began with the senator’s support of Development, Relief, and Education for Alien Minors, or the DREAM act. DACA grants a temporary legal status, while the proposed DREAM act is a bill that aims to create a pathway to citizenship for recipients. Serrano also asked that the parents of Dreamers, as people who would be protected by the DREAM act are known, be considered in protection.

Nunez then spoke about her experience as a recipient of DACA.

“I don’t want my immigrant status to define who I am,” Nunez said.

Field representative Jon Crosby responded to the group with affirmation, and said Senator Paul would issue an official statement soon.

“We’re all on the same page,” Crosby said.

On Tuesday morning, Paul tweeted about the DACA program.

“President Obama’s executive order was illegal,” Paul tweeted. “However, this is a real problem we should solve in a bipartisan fashion.”

In a second tweet, Paul added, “There are ways to make sure people who have been here for many years since childhood are allowed to stay.”

After the meeting with Crosby, several marchers walked to City Hall for the city commission meeting, where Serrano planned to speak.

Serrano also spoke about a personal experience, describing an incident where was told to “go back to Mexico” while walking with his girlfriend on campus. Serrano said that afterwards, he called the Bowling Green Police Department four times with no response.

Bowling Green City Commissioner Joe Denning did not propose a solution to the situation, but said he could understand Serrano’s position.

Hours before the city commission meeting and the march, Attorney General Jeff Sessions announced the rescinding of DACA in a briefing held at the Department of Justice in Washington, D.C.

Congress has six months to act before those who are currently recipients of DACA are no longer protected from deportation. If they do not act, almost 800,000 Americans would lose the ability to live and work in the United States. This includes several thousand Kentuckians.

On Tuesday, WKU issued an official statement about DACA.

“WKU officials will comply with all federal and state regulations, including the privacy protections afforded by the Family Educational Rights and Privacy Act [FERPA] to protect affected students,” the statement reads. “In addition, we will work proactively with members of our Congressional delegation as they work to resolve this important issue.”

The statement also adds that “Our priority continues to be supporting our students regardless of nationality, religion, ethnicity, and other aspects of our diverse community.”

“Now more than ever, it is extremely important to put pressure on the legislature to support students, workers, doctors, teachers, and everyone else,” Serrano said. “These are the people that deserve the American dream.”