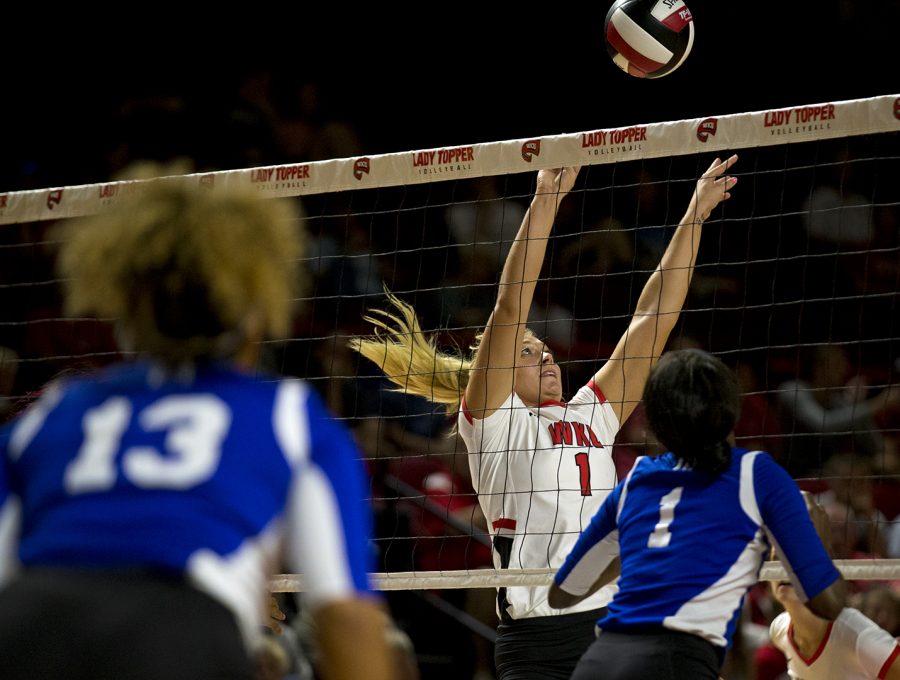 Senior Jessica Lucas sets the ball to a teammate during a game against Tennessee State Tuesday, Aug. 29, 2017 in E.A. Diddle Arena. WKU won 3-0.

The red-hot Lady Topper volleyball team will play its fifth and sixth consecutive road matches on Friday and Sunday as it opens Conference USA play with two tough tests against Florida Atlantic and Charlotte.

WKU (13-2) will come off of a six-day rest period before facing the Owls in Boca Raton, Florida, on Friday evening.

The Lady Toppers have won nine straight matches including a sweep of the Buckeye Invitational at Ohio State this weekend, featuring a 3-0 win over the host No. 25 Buckeyes, the first sweep of a ranked opponent in program history.

With the win over Ohio State, the Lady Toppers knocked the Buckeyes out of the Top-25 poll while picking up 77 votes, the most among teams that did not make this week’s Top-25 poll.

FAU (8-3) is coming off of a 3-1 loss to North Dakota State after stringing together five straight wins and will host the Lady Toppers on Friday evening at 6 p.m.

Leading the Owls on offense is sophomore Sigourney Kame, who has tallied 151 kills on the season on a .263 hitting clip. Senior Kristi Tekavec and junior Abbi Reid follow up Kame with 116 kills apiece.

Defensively, FIU has tallied 72 blocks on the season, including 32 from Reid and 17 from sophomore Jordan Yauch. Junior Alex Cardona has 173 digs for the Owls.

The Lady Toppers will leave Boca Raton to travel to Charlotte on Sunday at noon, where they will face the high-flying 49ers (13-3), who have won 10-straight matches.

Charlotte is led on offense by freshman Sydney Rowan, who has racked up 198 kills on a .206 hitting clip. Following closely behind is senior Janell Sparks, who is second on the team with 176 kills.

As a unit, the Charlotte defense has held opponents to .128 hitting percentage on the season while posting a 184.0 blocks. Senior Tatyana Thomas has 75 blocks to lead the 49ers while sophomore Jocelyn Stoner has 66.

Sophomore libero Yumi Garcia leads Charlotte with 339 digs on the season, 189 more than WKU libero Emma Kowalkowski, who leads the Lady Toppers with 150. Rowan has also put up 153 digs for the 49ers.

For their performances last week, seniors Jessica Lucas and Sydney Engle both earned a pair of C-USA weekly awards.

Lucas claimed her third-straight C-USA Setter of the Week nod after averaging 11.23 assists per set in the Buckeye Invitational with a total of 146 assists. The award is Lucas’ 15th of the same kind in her WKU career.

Engle grabbed C-USA Defensive Player of the Week honors after averaging 2.15 digs per set last week and matched her career high in blocks in the 3-0 win over Lipscomb last Tuesday with eight. Engle tallied a total of 16 blocks on the week.

Upon completing the two conference-opening matches, the Lady Toppers will finally return home for a pair of conference games next Friday and Sunday against Louisiana Tech and Middle Tennessee State, respectively.