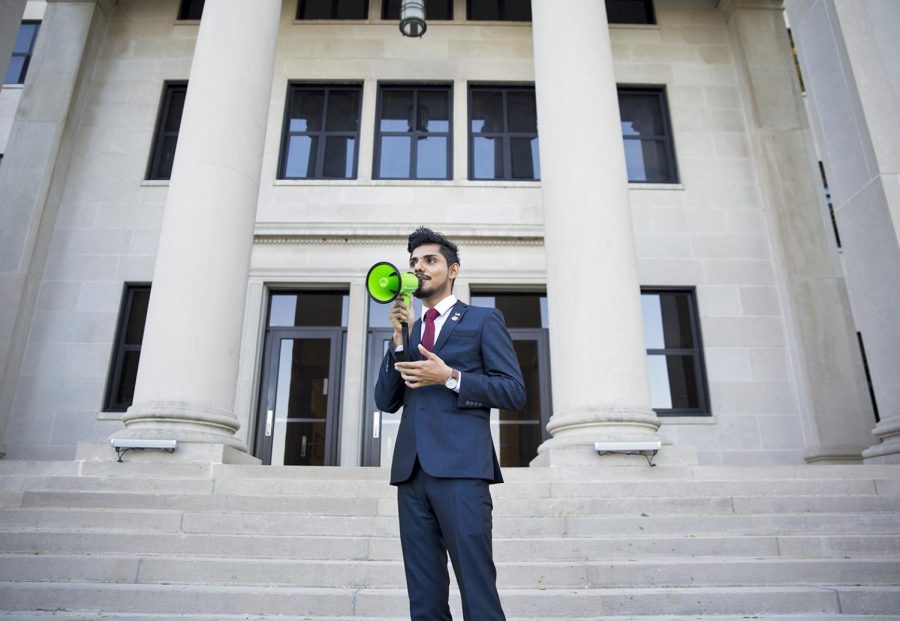 Francisco Serrano, a WKU junior, leads a rally for the Deferred Action for Childhood Arrivals amid recent questions on whether or not President Trump will continue the program. "Dreamers are our peers, our friends and people you've heard from today," Serrano said. "I'd rather be someone who supports dreams than someone who shatters them."

A group of people gathered in front of Henry Hardin Cherry Hall on Thursday night to show support for Americans whose immigration status is being threatened.

“Defend Dreamers and DACA!” was held to show support for immigrants who have been allowed to stay in the United States because of the Deferred Action for Childhood Arrivals policy and Temporary Protection Status.

According to the U.S. Citizenship and Immigration Services’ website, DACA protects young immigrants who came to the United States as children from deportation. It also gives them a work permit. The protection expires after two years but can be renewed. TPS protects immigrants from deportation if their native country is unsafe to return to. Neither DACA nor TPS provide a path to residency.

“I’ll always be grateful to my parents for immigrating here and getting a better life for not only me but my entire family,” Serrano said.

Serrano was one of five speakers who spoke about the importance of DACA and TPS. He was joined by Fabian Alvarez, an instructor in the English department.

Alvarez, who grew up in Texas surrounded by a large immigrant population, said many people falsely believe that undocumented immigrants do not want to become citizens.

Student Government Association President Andi Dahmer also spoke at the event. She said all students, regardless of their immigration status were Hilltoppers and worthy of the community’s support.

“Dreamers are your equals,” Dahmer said. “They have just as much right to be here on this campus and in this country.”

Two immigrants also spoke during the event. Julia Rivas, program support specialist for the WKU Center for Citizenship and Social Justice, discussed her move from El Salvador to the United States. She said life in El Salvador was surrounded by violence. She said teenagers often turned to gang violence, and the government had little power to stop it.

“Would you leave home if you didn’t have food to eat?” Rivas said. “If you weren’t safe? If your kids weren’t safe?”

She said she immigrated with her parents and older brother to New Jersey. Her brother wanted to attend college, but her parents could not afford to pay for it and he was ineligible for loans because of his illegal status.

Like her brother, she had also wanted to go to college, and when she received TPS she was able to receive loans which allowed her to attend WKU. She recently graduated from WKU with a master’s degree. She said moving to America gave her the life she has now.

“Unfortunately, our families have to migrate to look for dreams,” Rivas said.

The final speaker was a WKU student who immigrated with her family from Mexico. She said life was difficult, but DACA opened opportunities for her. Under DACA, she could get a license.

“You don’t see how much it’s helped people,” she said.

Serrano said the DREAM Act of 2017, a bi-partisan bill, was just introduced by several U.S. senators. The bi-partisan bill would provide a direct road to citizenship for people who have TPS, DACA or are undocumented, according to the National Immigration Law Center.

History professor Patricia Minter said she was pleased with the turnout because of the message of support it sent to the Latino community. She said she believes the U.S. needs to continue to support the immigrants who were promised protection.

“I’m here to support our latino students and bear witness to the fact that America needs to keep its promise to DACA students,” Minter said.