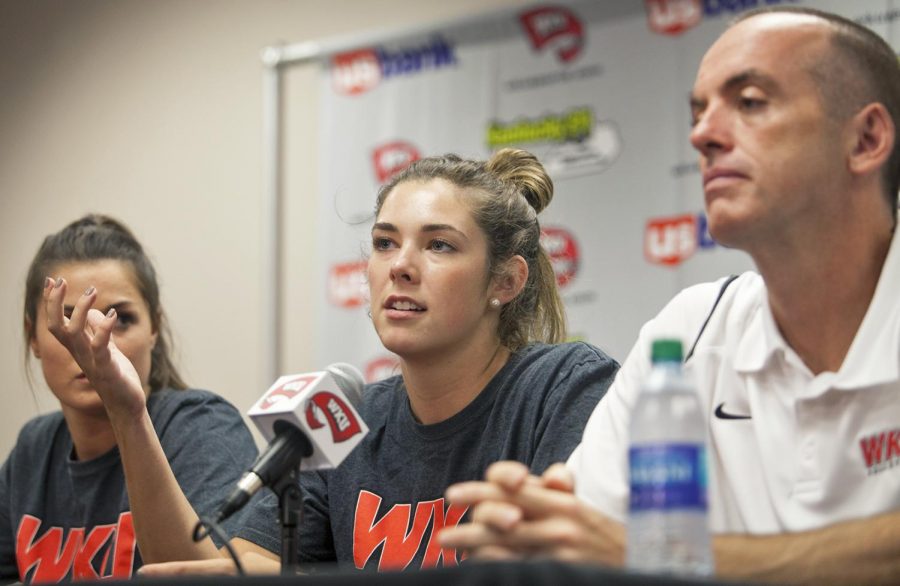 Senior Outside Hitter Sydney Engle speaks in the media room at diddle arena on her experience with volleyball and her team on Tuesday Aug. 22, 2017. “It’s a sport that i finally got into,” said Engle. “My team, they just make me want to get better all the time. I want to provide for them and do the best i can for them.”

When looking up and down the roster, not much is different since the Lady Toppers’ 30-3 season ended last year.

In fact, the defending Conference-USA Champions have gained more than they’ve lost this off-season.

Returning 100 percent of an offense that was ranked No. 2 in the nation last season , WKU head coach Travis Hudson expressed one sentiment to describe how the team feels about getting the season underway.

“We’re excited,” Hudson said at Tuesday’s media day. “We’ve had a healthy camp and we have enough pieces to have another very special season. We can’t wait to see what we are going to become.”

The Lady Toppers loaded up the stat sheet last season, finishing in the top 25 in a number of NCAA Volleyball statistical categories . The good news is that experience all comes back to the court for WKU this season.

Returning to lead the offensive attack is senior outside hitter Alyssa Cavanaugh, who was voted the C-USA Preseason Player of the Year. Cavanaugh finished 18th in NCAA individual standings in 2016 with 516 total kills on a .343 hitting clip.

“The thing that impresses me most about Alyssa is that she shows up to play every day,” Hudson said. “I can’t remember a time in the last few years where she was a no-show. When the lights come on, she’s ready to play, and that is very comforting as a coach.”

Beside Cavanaugh will be the presence of senior setter Jessica Lucas, who averaged 11.64 assists per set last season, good for sixth in NCAA individual standings. According to her head coach, skill is not the only thing that Lucas brings to the table.

“[Lucas] truly is the quarterback of our team,” Hudson said. “She is a great player in her own right, but she also takes pride in making everyone around her great. She brings greatness to the gym every day.”

Rounding out the group of returning starting seniors is outside hitter Sydney Engle. Engle proved to be an all-around force for the Lady Toppers in 2016 after picking up 254 kills to accompany 137 assists and 324 digs, good for second on the team.

“We have lots of great players in our program, but I believe that Sydney is our greatest volleyball player,” Hudson said. “She is what we call our ‘glue player’ because she keeps our team together. She can do it all, offensively and defensively.”

Rounding out the returning starters are junior middle hitter Rachel Anderson and last season’s team leader in blocks, Amara Listenbee. Anderson finished first on the team and 10th in the NCAA with a .414 hitting clip and second on the team with 406 kills.

Returning players who also made an impact in 2016 include junior Taylor Dellinger, who finished with 238 kills, sophomore Emma Kowalkowski, who had 607 total attempts and sophomore Sophia Cerino, who contributed 24 kills on 68 total attacks.

Hudson does have an important aspect in this season’s team that he has not had in a long time: depth.

For the two seniors lost to graduation in 2016, four freshmen come in to compete for their places.

“We were held together by a thread last season,” Hudson said. “Our depth was not very good. One injury would have made us look very different.

“This year is very different. Not only do we have some talented newcomers, all of our kids are better volleyball players than they were a year ago. We have a group that is confident with themselves and are confident with each other.”

Two players who emerged in the scrimmage against Kentucky last week were freshman setter Taylor Bebout, who racked up 11 assists in her two sets of play, and freshman Darby Music, who tallied nine digs in two sets at the libero position.

Along with Music and Bebout, freshmen Hallie Shelton and Kayland Jackson round out the newcomers and add more depth to the Lady Toppers’ bench.

“When I say we’re better than we were a year ago, it’s because early in the year when nobody is thinking about volleyball, these kids are in the gym getting better,” Hudson said. “I think that is a testimony to how hard our girls work and how coachable all of them are.”