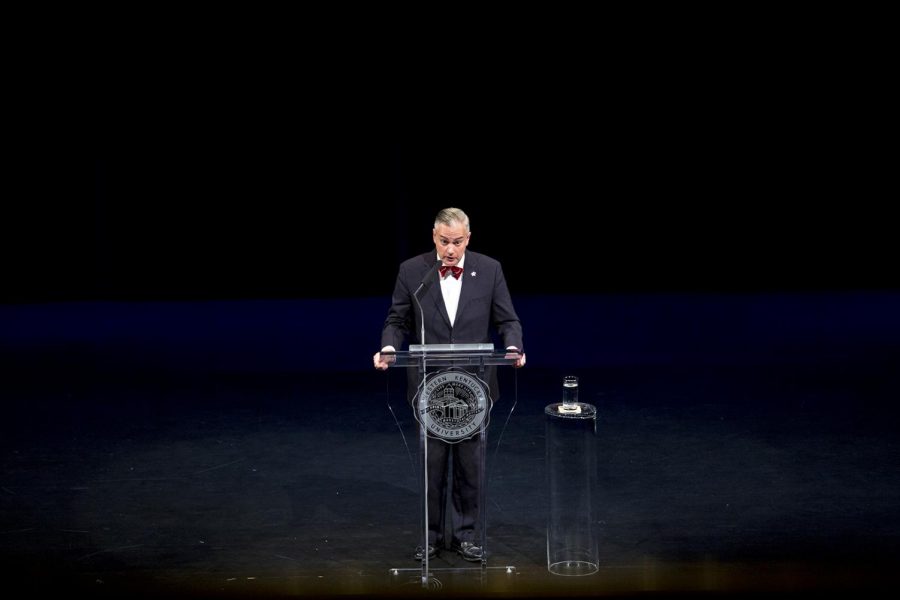 President Timothy Caboni gives out faculty awards and delivers his convocation speech on August 18, 2017 in VanMeter Hall. President Caboni started his speech by stating that what was more important that his vision for the university was "What is our collective vision for our university?" President Caboni went on to talk about Strategic Planning and Strategic Doing that was upcoming, including reinstating the spousal tuition benefit, which reduces tuition for spouses of employees of WKU.

“It’s good to be back home,” Caboni said.

Caboni, who has officially been in office since July 1, addressed faculty, staff, students and the Board of Regents on Aug. 18 in his first President’s Convocation.

Several faculty and staff members were recognized with awards of excellence before the address began. Director of Student Conduct Michael Crowe was the recipient of the Spirit of Western Award.

Crowe, a graduate of WKU and an employee at WKU since 2008, received a standing ovation when his name was announced. Crowe said he was “overcome with emotion” when he learned he was the recipient.

“I really see this as a true honor,” Crowe said. “It’s going to motivate me to do this even more … this whole thing just lit a fire even more under me for this institution.”

One of the faculty members in the audience was Cecile Garmon, the director for the Center of Leadership Excellence. Garmon, who has worked at WKU since 1980, said she felt that positive changes were in WKU’s future.

“I’m excited,” Garmon said. “[Caboni] hit on points that we need to focus on. He’s changing the focus to meet the needs of the students, with an increase of programming rather than construction.”

Patti Minter, a professor in the department of history, said she found Caboni’s address to be refreshing, especially with his remarks regarding recent events in Charlottesville.

“Bigotry and hate have no place on this campus,” Caboni said during his address.

“Bigotry and hate have no place, and it was a message for a difficult time,” Minter said. “He spoke of diversity, equity and inclusion.”

At Friday’s convocation, Caboni announced plans to reinstate spousal tuition benefits at WKU, giving spouses of WKU employees discounts on tuition. Minter said she was supportive of Caboni’s decision to reinstate those benefits, saying it was important to have “commitments to all strengths as an institution.”

“We have long neglected our strengths,” Minter said.

WKU Provost David Lee said he felt Caboni’s address showed he was putting “his own stamp on WKU already,” and providing leadership to the university.

“He has laid out an agenda that focuses on student success, processes and investing in long-term programs,” Lee said.

Lee said it was too early to tell how Caboni’s term will differ from former president Gary Ransdell’s, but said he knows that he is “thinking about his own directions.”

Garmon said she felt optimistic about Caboni as the next president.

“If he acts as well as he speaks, especially with his attitude of inclusion in decision making, it will be a change from the previous administration,” Garmon said.