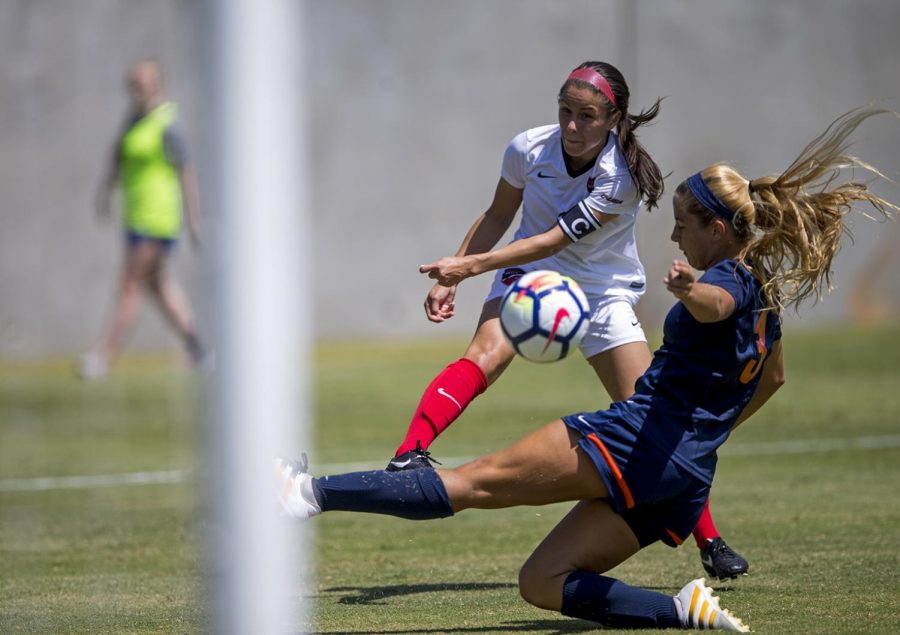 Senior midfielder Hannah Chua (2), takes a shot on goal during the second half of WKU's game versus UT Martin on Sunday August 27, at the WKU Soccer Complex.

The WKU women’s soccer team has looked potent this season when it has been able to apply the pressure. On Sunday afternoon, the Lady Toppers were able to do so as freshman Ashley Leonard found the back of the net four minutes into the overtime period, defeating UT-Martin 1-0.

Head Coach Jason Neidell said after the game he feels his team can be comfortable to be in that position.

“We have good enough athletes that we want to be a pressing team that pushes a team down to their end and defends with numbers,” Neidell said. “I thought there were times that we looked really sharp today.”

Neidell said it was frustrating early on for him as his team had some trouble breaking down a Skyhawks team that stayed tight and pushed back most of the game. Neidell said he felt the team did a good job figuring things out towards the end of the first half.

“If our execution was a little better early in the game, then maybe we could’ve ended the game before overtime,” Neidell said. “It’s always the last piece of the puzzle that you put in as a soccer coach. You’re always working from the back to the middle and the front piece just wasn’t quite there today.”

The Lady Toppers (2-2-0) outshot the Skyhawks 20-4 (9-3 on goal) and applied the pressure aggressively all afternoon. Neidell said the team’s execution needs to be sharper though. WKU has come out on top in both matches this season when able to apply more shots on goal, holding a 6-3 advantage in the win against Lipscomb University to start the season.

While they were able to apply the pressure and come out on top Sunday, the Lady Toppers were unable to be as dominant on Friday against Austin Peay, falling 2-1. Neidell said Sunday that the team is still working towards improving on closing space.

“We lost some important pieces [from last year],” Neidell said. “We had Iris Dunn up front, who was such a presence up there that no one really wanted to face against her.”

WKU has seen signs of hope from its youth, as Leonard’s decisive goal Sunday was the second goal by a true freshman for the Lady Toppers this season, after Tally Bishop scored in the season opener.

Leonard only needed four minutes on the field Sunday to secure hers.

“It feels awesome, amazing to be here in the first place and to be able to get out there and get it done for the team,” Leonard said. “I think it means a lot to the team because we put a lot into winning on our home field and to have it be a win is a great feeling.”

The Lady Toppers will have a longer week to prepare than they have so far this season, as Neidell said the team will take the time to work on a few things, forward runs being an example.

WKU Soccer will play again Sunday, Sept. 3, at 6 p.m. against University of Evansville in Bowling Green. This Sunday will double as Youth Soccer Day, as younger players are encouraged to join the atmosphere of a collegiate match.