Professional and amateur ways to photograph the eclipse 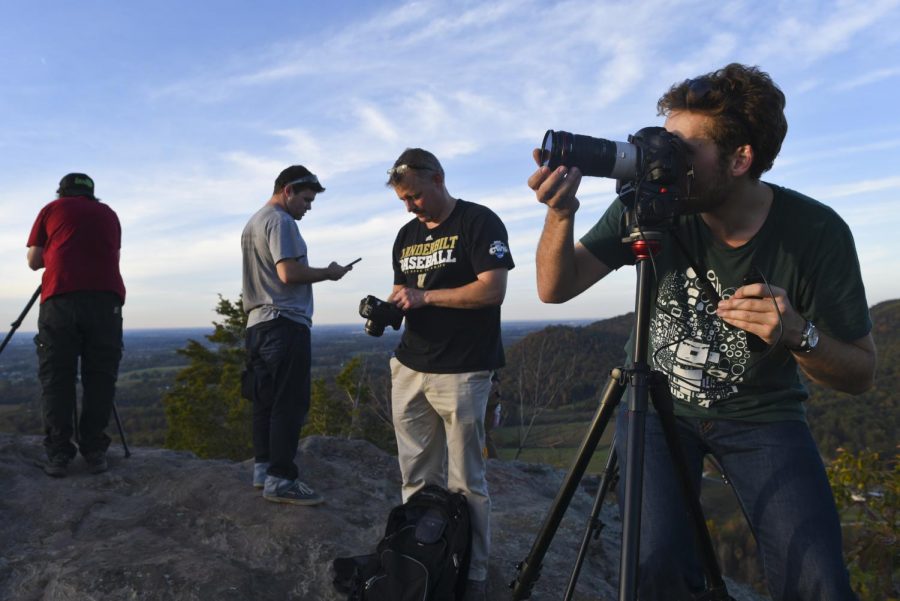 The solar eclipse on Monday will be a sight of historical significance, and photographers will flock to the crowds of people viewing the eclipse to take pictures of their reactions and the eclipse itself to commemorate the event.

But even if you’re not a professional photographer, there are still ways to capture the beauty of the eclipse.

Theo Wellington, Eclipse Planning Coordinator and NASA Solar System Ambassador, said mreclipse.com is a good website to visit if you want to learn how to take pictures of the eclipse on August 21.

Wellington said some programs can take photos automatically during the eclipse on cameras and phones.

For Apple computers, Eclipse Maestro allows a Canon or Nikon DSLR camera to take automatic pictures during the eclipse, she said. There is a similar program for PCs called Eclipse Orchestrator.

To take automatic pictures on your smartphone, the app Eclipse Megamovie Mobile will take control of your smartphone and take pictures automatically based on your location, Wellington said. The app can also be used with a DSLR camera.

The app can link you to The Megamovie Project, which is soliciting people’s pictures and videos of the eclipse if you give your permission. The project consists of a group of scientists. The images would then become part of a dataset of eclipse imagery taken nationwide.

WKU Hardin Planetarium director Richard Gelderman recommends videotaping or taking pictures of the refractions of friends and yourself during the eclipse.

Jonathan Adams, a visiting professional-in-residence for the School of Journalism and Broadcasting, will be taking pictures of the eclipse at totality in Lebanon, Tennessee for “Boys’ Life Magazine” on Monday, and he will also be taking photos of the Boy Scouts there during the partial eclipse.

“I think the people are going to be as much of an experience as the eclipse,” Adams said.

Adams will operate three or four cameras. He does not have a solar filter for his cameras, which is needed to take photos of the partial eclipse, so he will only be able to photograph the eclipse at totality.

He will shoot a time lapse on a GoPro camera, using the wide-angle lens to get the Boy Scouts in the frame and to see the transition from brightness to darkness and back to brightness.

Adams will use Auto Exposure Bracketing, or AEB, to automatically take five images of the total eclipse, all at different exposures. He said people who use AEB to photograph an eclipse often use Photoshop to bring all the photos together to make one picture.

For those who plan on photographing the eclipse, Adams advises focusing on experiencing the moment, not just taking pictures.

“I think the main thing is don’t get so wrapped up in photographing, please,” he said. “Don’t let that drive you. Make sure you experience it.”

Adams said you can take pictures of the partial eclipse with your phone if you put the lens behind a solar eclipse viewer as you point it to the sun.

Because it is safe to view the eclipse at totality with the naked eye, you do not need a filter to take pictures of the total solar eclipse.

Another Kentucky photographer is excitedly awaiting the eclipse. On Monday, Alex Slitz, a photographer for the Lexington Herald-Leader, will be in Hopkinsville, Kentucky, where there will be the greatest point of eclipse in the country.

Slitz attended WKU from 2006 to 2009. He is from Cleveland, Ohio, and he moved to Lexington, Kentucky about four months ago.

Slitz will set up about seven cameras at Orcharddale Shepherd Farm around 6 a.m., including two Canons, a Nikon 360 VR and a couple of GoPros. He also has a solar filter. He will document the eclipse itself and people’s reactions.

“The overwhelming energy of this town is going to be insane,” he said. “You’re going to have [an expected] over 100,000 people come to Hopkinsville, and you’re going to get people who have never seen a small town in Kentucky like this before, and it’s going to be just awesome to be there.”

Slitz will also take photos of the Kelly Little Green Men Days Festival. The festival will be held because of the alleged alien sighting on August 21, 1965 in Kelly, which is just outside of Hopkinsville.

Slitz plans to take pictures at a tattoo shop in Hopkinsville that designed four solar eclipse tattoos as well.

Like Adams, Slitz plans to focus on not only taking pictures, but experiencing the eclipse for himself.

“That’s going to be one of my biggest challenges, I think – just to take it in as it’s happening rather than going back and looking at the photos,” Slitz said.