Competition at wide receiver heats up as season approaches 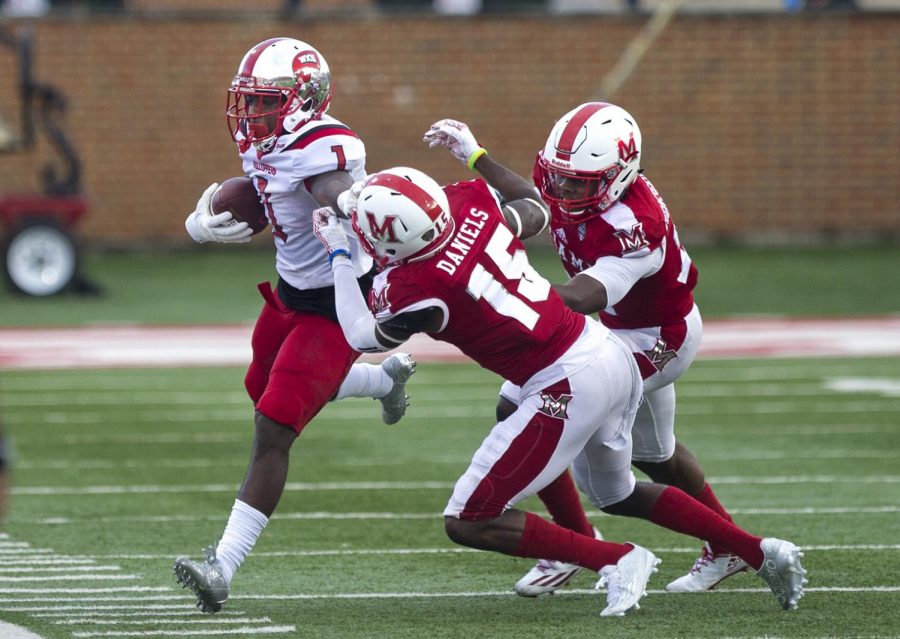 With the opening kickoff to the 2017 season less than two weeks away, the WKU faithful still doesn’t have an idea of who will be the go-to guy in the passing game.

Replacing the likes of WKU greats Taywan Taylor and Nicholas Norris will be far from easy for new head coach Mike Sanford and his team. The Hilltoppers return several familiar names such as senior Nacarius Fant and redshirt sophomore Lucky Jackson, but none of them have separated themselves from each other or the rest of the receivers throughout camp.

But just because no receiver has stood out enough to be a clear-cut number one at the position doesn’t imply a lack of confidence in the group. Sanford said he’s been pleased with the group’s progress from the spring game throughout fall camp and believes depth at the position will be one of the Hilltoppers’ strengths this year.

“We want to use as many human beings that can help us win games,” Sanford said at the conclusion of fall camp on Saturday. “We want guys to get out here and touch the ball. Its going to be interesting to roll these guys out when we start game-planning and getting more specific on how we want to go after Eastern Kentucky’s defense.”

During Saturday’s intrasquad scrimmage, senior quarterback Mike White mentioned getting the football into several different players’ hands was not a problem. Of the bunch, White mentioned two names that stood out from the rest.

One was Fant, the leading returning receiver from 2016. Fant caught 29 passes for 407 yards and two scores despite having his season cut short five games due to a torn ACL. Because of his performance at receiver and as a punt returner, the Bowling Green native was named to the Paul Hornung Award Watch list. The award is given annually to the most versatile player in college football. Now, with Taylor and Norris gone, the door is wide open for Fant to make more of an impact at receiver than ever before.

“I’m an upperclassman, so a lot of things will be thrown at me next year,” Fant said at the team’s media day earlier this month. “I think it’s up to our receiving corps as a whole to make up for [Taylor and Norris]. There are a lot of young guys that are going to step up this year and really make a name for themselves.”

The second name White mentioned was Cameron Echols-Luper. Although he may the newest member to the bunch, Echols-Luper is hardly the youngest or least experienced.

Echols-Luper arrives at WKU after stints with Texas Christian University and Arkansas State. If there’s one thing the graduate transfer brings more than anything, it’s speed. During his time at TCU, Echols-Luper was a member of the Horned Frogs’ 4×100 meter relay team that finished 11th in the nation. He did so after serving as the primary punt returner during TCU’s 12-1 season in the Horned Frogs just missed the inaugural College Football Playoff. It’s not a matter of if Echols-Luper will see the field, it’s but more a matter of where. Echols-Luper has caught a touchdown, returned a punt for a touchdown and even thrown two touchdowns during his college career.

“I’m a senior here and I’ll do whatever Coach Sanford needs me to do to help the team win,” Echols-Luper said, according to a press release. “We all have the same mindset, we’re ready to ball.”

Jackson is also expected to compete for a starting receiver spot. Jackson caught 26 balls for 395 yards and two touchdowns. He was the lone receiver to catch a touchdown in the spring game, a three-yard toss from junior quarterback Drew Eckels.

The Hilltoppers also return senior receiver Kylen Towner, who is primarily known for his performance on special teams. Towner earned preseason C-USA special teams player of the year after breaking the FBS record single season average kickoff return at 40.3 yards per return. Similar to Fant, Towner will be expected to use his explosiveness in the open field on the offensive side of the ball.

As far as the tight end position goes, the arrival of JUCO transfer Mik’Quan Deane gives the Hilltoppers a little more depth at a position that returns zero catches from last year.

Deane was rated the No. 4 JUCO tight end nationally by 247sports.com and No. 67 overall in the JUCO rankings. White mentioned redshirt senior Deon Yelder also making some nice plays in the scrimmage. Yelder has made his impact primarily on special teams and blocking the infamous extra point in overtime at Middle Tennessee last season, a play that ultimately catapulted WKU into the Conference-USA championship game. Yelder will look to compete with Deane for the starting spot in his final season at WKU.

The Hilltoppers kick off the 2017 season next Saturday vs EKU. While the hierarchy on the wide receiver depth chart is still unclear, Sanford and White appear to be confident in all of them.