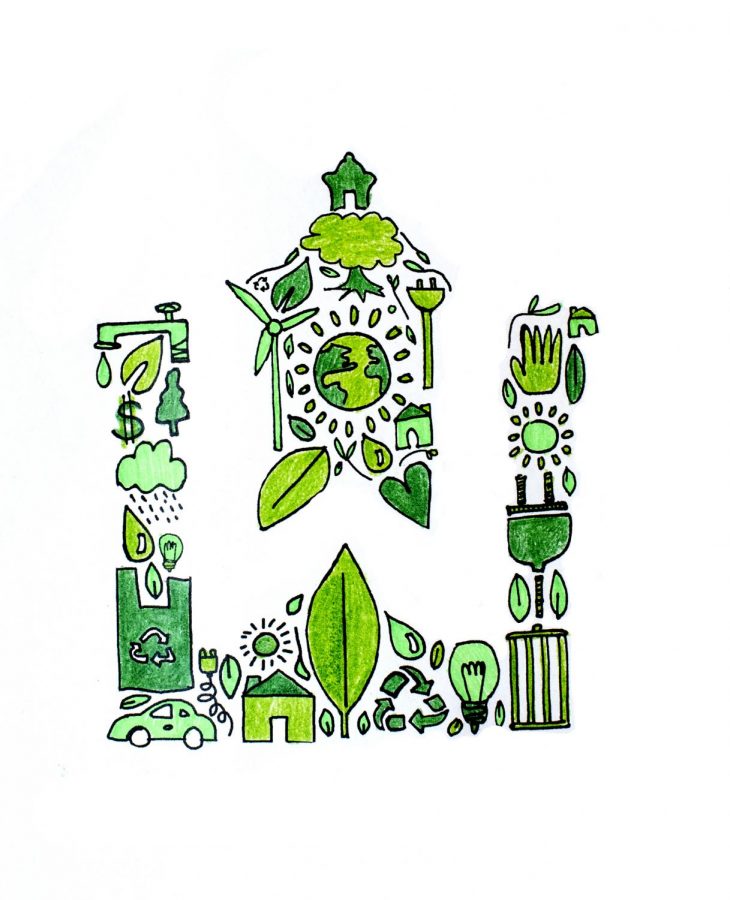 One of the Student Government Association’s goals is to support sustainability. Its Sustainability Committee hasn’t held its first meeting yet, but the members already have ideas to improve sustainability efforts on campus.

The committee is working on instituting several programs and improving others to allow WKU to better recycle and conserve energy.

“I think that he will definitely continue President Ransdell’s tradition and increase sustainability overall,” she said. “I’m really excited to work with him.”

Ransdell was known for his sustainability efforts, according to the Spring 2017 issue of the Talisman magazine. He put “Ransdell’s Rule” in place to ensure that for each tree removed, two trees would be planted somewhere on campus. Energy sourcing switched from coal to natural gas in 2008, and Ransdell promoted “conservation vacations,” which consisted of shutting the campus down during its holidays. Ransdell also helped SGA support the push for students to stop using Subway’s plastic bags on campus during the Fall 2016 semester.

“So far he’s been very supportive, and I think he’s very forward-thinking like President Ransdell was, and Dr. Caboni has already been very hands-on and excited to work with us, which I think is awesome,” she said.

SGA’s executive branch will meet with Caboni monthly, so they will be able to tell him their goals and discuss issues as they come up, Molyneaux said.

“I feel like Caboni will be able to push [sustainability] even further than it was before,” he said.

Hamilton is hoping to expand the committee, which now consists of about 20 members. “The more, the better,” he said.

McAvoy feels glad SGA is prioritizing sustainability because she feels it is an important issue.

“We don’t realize how much damage we really are causing to the earth,” she said. “We only have so many trees. We can only fill up so much of a landfill with trash before it becomes overwhelming.”

McAvoy is working on a reusable bag program which will encourage students to use reusable shopping bags instead of plastic bags. She got the idea around the time of the Earth Day festival last year but did not have enough funding. This year, Elizabeth Gafford, Coordinator of Resource Conservation, funded it for her. The bags were about $4.30 each, and there were about 50 bags total.

On Tuesday, Molyneaux approved McAvoy’s idea to put the bags in the SGA office, where people will collect 25 plastic bags from each student who wants a reusable bag. The plastic bags will be taken off campus and recycled.

The SGA office currently offers Green Books, instead of Blue Books, for examinations, which consist of mostly recycled paper, and it holds the highest possible ranking, three acorns, from the Office of Sustainability’s Green Squirrel of Approval program.

The Green Squirrel of Approval requires buildings or offices to answer questions on a detailed questionnaire showing its sustainability practices, including how it conserves energy and recycles. The office or building then receives a ranking out of three acorns.

SGA is hoping to expand several other sustainability programs.

Molyneaux said SGA is hoping to expand the reusable container program on campus and is working on instituting a reusable cup program to use for all dining locations.

She also hopes SGA will expand local food options on menus, but it will be difficult at some locations, including Chick-Fil-A and Steak N’ Shake, because of licensing and legal issues that may keep them from changing the menus.

At places like Fresh Food Company, it is easier to serve local food options because it has more freedom with its menu.

“There might not be a lot we can do in terms of [expanding local options], but I think it’s important to try as hard as we can to expand options for students and make things healthier and local and locally grown,” Molyneaux said.

Molyneaux has also been working on a recycling program for Greek life that will allow Greek organizations to have a way to recycle.

Hamilton said there will also be a recycling program for the homecoming floats this year. The floats are made with paper mache, which cannot normally be recycled. This year, they will be sent to Louisville to be recycled.

When it comes to sustainability, Hamilton feels every bit of effort counts.