Bowling Green astronomers share their stellar knowledge of the 2017 eclipse 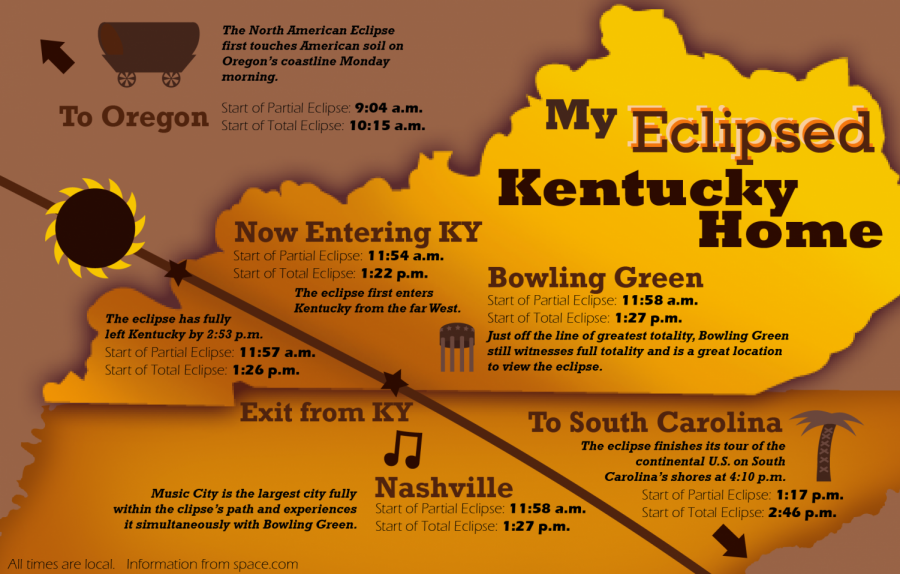 Ronn Kistler is the Planetarium Coordinator of WKU’s Hardin Planetarium. The planetarium has presented eclipse shows, free to the public, throughout the summer in preparation for Eclipse Day.

Rico Tyler is a Master Teacher with WKU’s SKyTeach which is in coordination with the Department of Physics and Astronomy. He lives in Franklin, having anticipated being within the line of totality of the Great American Eclipse.

Kera Regan-Byrne is an Astronomy major at Boston University, a Bowling Green native, and a long-time volunteer at the Hardin Planetarium. She returned to her hometown for Eclipse Weekend to reunite with family and friends, as well as to share her astronomy knowledge.

What is the difference between a solar and lunar eclipse?

With all the excitement around the Great American Eclipse, most people assume that total solar eclipses are extremely rare. But how rare are they? How often do solar eclipses occur anywhere on the earth?

TYLER: “It’s kind of like the lottery. Lotteries are very common, but being a winner is not. Solar eclipses happen, on average, about once every 18 months, somewhere on the earth. But the shadow of the moon on the earth is only about 70 to 100 miles wide, and the only way you can see the eclipse is if you are where the shadow is. So, if you pick a spot on the earth, just take a map of the earth and put an ‘X’ on it at random, then typically that spot will get an eclipse once every four centuries. So, solar eclipses somewhere on earth happen very frequently, but because a total eclipse can’t be seen by everyone, your chances of being where the eclipse are are very low. And that’s why you’re seeing so many people coming to this one. Because for most people to see a total eclipse, you’ve got to go where it is.”

KISTLER: “So, the moon’s orbit is inclined slightly to the plane of the solar system, so as the earth goes around the sun, and the moon is going around the earth, you know, the three of them are in a vague row every month…However, being as the incline of the moon’s orbit leaves it kind of below or above the plane of the solar system, it’s not always in a perfect line and that’s what you need–the line-up–to cast a shadow on the earth…So there’s two times a year when it’s actually in a good position…and then it’s right smack in the way of the sun.”

Can total solar eclipses occur on other planets other than the earth?

KISTLER: “Mercury and Venus have no moons at all, so, no chance for an eclipse there…Mars has got two moons, but they’re small. One of them I think is only about 19 miles across, so they’re little, tiny, nasty little moons, I mean, I’d be embarrassed if I was a Martian to call those things moons, but they’re small and they would never cover the entire sun. They do sometimes get in front. And when they do pass in front of the sun, and they’re small little objects, we call that a transit, rather than an eclipse, because they don’t block out the entire sun…Now, there’s a good possibility that in some of the outer gas giants there could very well be eclipses. I don’t know of anybody taking the time to figure out the mathematics because, well, not only could one of the moons of Jupiter eclipse the sun if you were able to stand on the surface of Jupiter, if you were able to stand on one of the moons–which you can–you might see another moon eclipse the sun…So there’s a lot of possibilities for eclipses there. And then, of course, Neptune and Uranus, also have a lot of moons.”

What are the scientific causes behind some areas experiencing longer periods of totality?

Maps and interactive websites can tell ordinary people down to the second exactly where an eclipse will happen and how long it will last, both partially and totally. How do astronomers predict when and where eclipses occur, and how are they able to be so accurate?

TYLER: “From an astronomer’s point of view it’s actually pretty easy to do. The motion of the earth is pretty well defined. It orbits the sun every 365.24 days. The moon orbits the earth every 29.54 days. The angle between the sun and the earth and the moon is a known value. And so, with the right measurements, you simply predict it out. It actually can be calculated for several thousand years. In fact…the house that I live in, I built in 1990…and part of our thinking when we located the house was to be close to the eclipse line in 2017.”

KISTLER: “It’s all mathematics. The orbits of the celestial bodies are very exact. They don’t vary at all, unless some object enters the system and throws them off a bit…Things do change slightly; the orbit of the moon is not always exactly on the same path, but it kind of comes around and mathematically it is easy enough. We’re so good now at gravity and understanding the forces of gravity and of momentum that we can pretty well calculate exactly where something is going to be at any given time…A couple years ago, the first spaceship flew by Pluto. It was launched nine years before that, and based on their calculations nine years before, they came within a hundred miles and about ten seconds of arriving at the spot they thought they were going to nine years before. They were that close.”

What kind of effect will the eclipse have on solar-powered vehicles or buildings?

REGAN-BYRNE: “Typically, what happens is that solar panels collect energy, and that gets stored in some kind of generator, so you can still use electricity during the night time, so it should all still work, because there is still some energy source. It just won’t be gathering as much light as it typically does.”

TYLER: “It will have a temporary effect. A short-term effect. From start to finish, the gradually darkening phases, the total eclipse, until it’s totally over again, will be less than three hours and so during that period of time, a solar powered device would get gradually less power and it would slowly come up to normal…And so, a solar powered device would act like it would on any dark day.”

It’s been said that people can safely remove their eclipse viewing glasses once fully within totality and look at the eclipse, as long as they put their glasses on again before totality has ended. Is there any truth to this? And even if there is, do you still recommend it?

KISTLER: “It is true…There are seconds before the moon completely covers the sun; there are a couple of interesting phenomena that you may have heard of…And maybe three seconds before it’s covered, there are these little spots of light all around the rim of the moon where the sun’s light is, and they look like beads on a string of necklaces. And what that is is the valleys on the moon, because the moon is not a perfect circle…And so, seen in silhouette, the light sneaks through the valleys…and they show up like what they call Baily Beads. So, you know at that point you’re, like seconds away. Then, here in Bowling Green, we’ll have about 50 seconds of totality, but the minute you see the Baily Beads reappear, and the Diamond Ring reappear, and even a little bit of the sun start to show up, yes you’ve got to put those solar viewers back on. You do not have to have them on during totality; in fact, probably, to see the show, it’s better to take them off, because you won’t be able to see anything through the total viewers, they’re totally dark…The other thing you’ll be able to see is the corona of the sun, shining up around the edge and planets in the sky. We should be able to see at least four planets at this point because the sky will be dark enough to see planets and a few bright stars. You won’t be able to see them with the viewers on.”

What advice do you have for people viewing the eclipse?

REGAN-BYRNE: “Be careful. Be safe. Know what you can use to look at the sun and what you can’t…There’s some grades of welding glass, that go on the giant welder’s masks, that are good enough to be used…#14 welder’s glass….If you’re driving somewhere, towards totality be ready to turn your headlights on, because it’s going to get dark.”

TYLER: “A total eclipse of the sun is one of the about four truly spectacular things that a person can just go outside and see in the sky, and of those four, the solar eclipses are very rare…If you can find a way to be where totality is where you can see it, it’s well worth the show…When I talk to student groups and teachers and such, I compare it to the Kentucky Derby. The Kentucky Derby is only about two minutes long, but if I went to Louisville and attended all the Derby Week celebrations just because the actual running of the horses is only two minutes long, doesn’t mean it’s not a very spectacular part of Derby Week. And I’d hate to think that someone watches only the partial phases and ignores the fact that the truly spectacular part of the eclipse are those magic few minutes in and around 1:27.”

KISTLER: “I would say, make a plan. Think about where you’re going to be…So, watching the full show, you’ll be out there for several hours, and think about what it would be like sitting at the beach in the bright sun for a day or sitting in the park or sitting out watching a rock concert in the middle of the day and be prepared. The second part of the plan is where… I’ve caught several people in discussions and workshops and their eyes suddenly pop open and they say, ‘What?! If I’m at the Corvette Museum I’m not going to see it?!’ ‘No, you’re not.’ Take a few minutes and drive down to a park here because it’s worth it to catch the full show…On the eclipse website that WKU has set up, wku.edu/eclipse—there is a link to ‘Where and When Can I See the Eclipse?’ and down below that link, that page, is an interactive Google map. And you can figure out, by zooming in, exactly if where you’re standing, or where you’re going to be, is going to see the total eclipse.”