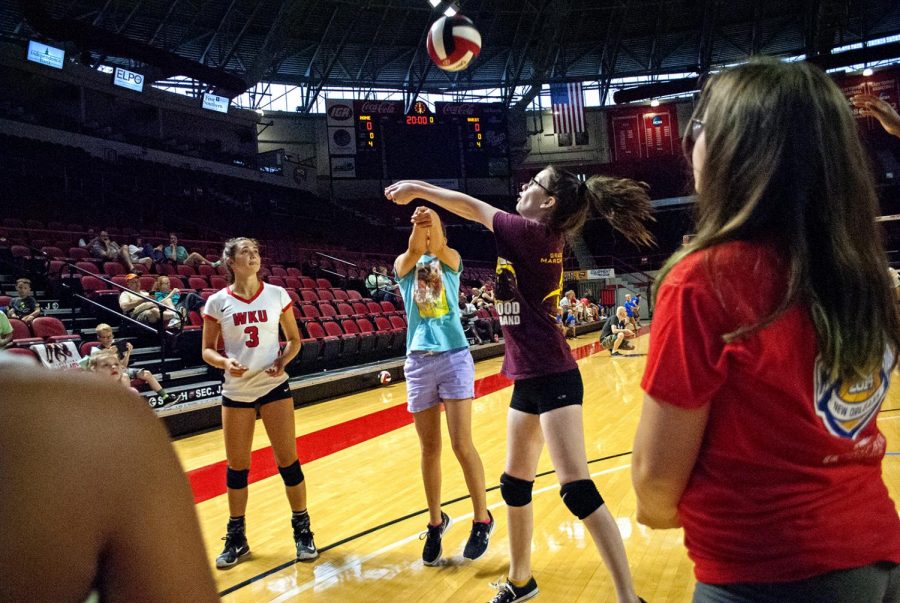 Emma Kowalkowski Sophomore from Lake Orion, Michigan, assists volleyball players at an Volleyball Clinic hosted by the WKU Volleyball team in Diddle Arena on Aug. 19. Kowalkowski said she likes "seeing their progress ... and making them fall in love with the sport at a young age."

WKU volleyball fans, young and old, gathered at E.A. Diddle Arena on Saturday afternoon for a day of education and fun as the Lady Toppers hosted their first annual “Volleyball 101” event.

The event featured a scrimmage between players of the WKU volleyball team, followed by two separate clinics put on by the players, assistant coaches and head coach Travis Hudson.

“It’s a great way to end our two-a-day training camp and to give back by involving our fan base and our community,” Hudson said. “By the end of those sessions, most of the players and coaches are pretty stale, so it’s a bit of a boost being able to work with the fans.”

The kid’s clinic, which was put on by WKU players and assistant coaches, featured multiple engaging and interactive drills on proper techniques of blocking, passing, setting and other fundamentals of the game.

The “101” clinic, put on by Hudson, brought the older fans together for an hour-and-a-half meeting to explain official volleyball signals and fundamentals such as techniques and player rotations while also taking multiple questions regarding these topics.

During the “101” clinic, fans also got an inside look of some of the team’s signals while sharing a couple of laughs with Hudson about occasional behavior toward officials.

“See this guy right here?” Hudson asked as he pointed out a mark on the whiteboard, which resembled a line judge. “This guy is always right next to the bench, so feel sorry for him if you see me start to get angry with a call.”

The event also opened many eyes about the way the game of volleyball is rapidly growing and how the fan base is beginning to get more involved.

Knowledge was shared in the meeting, as many fans pitched in to ask questions and share their thoughts about certain fundamentals of the game, interacting with Hudson one-on-one.

After the event, Hudson was able to go a little more in-depth on what it meant for the players to be able to escape the world of college volleyball for two hours to be able to educate younger fans who hoped to one day recognize their aspirations.

“It’s a good perspective check for [the players],” Hudson said. “The last few weeks, it’s been all about them. It’s refreshing to see all of those kids running around because our players were in those shoes many years ago, looking up at college volleyball players and dreaming to get to that point.”

As for the pre-clinic scrimmage between the Lady Toppers, Hudson was excited about what he pulled out as the team prepares to open the season on Friday at the Miami Best Western Sycamore Inn Invitational in Oxford, Ohio.

“We have a lot of pieces and our depth is a lot better than it was last year,” he said. “We have great kids that continue to learn and push each other. I’m looking forward to all of the challenges we have on our schedule this season.”

A media day including Hudson and select players will be held today at 1:30 pm in the Paul Just Media Center at Diddle Arena. The event can be viewed live on Twitter by following @WKUHeraldSports.