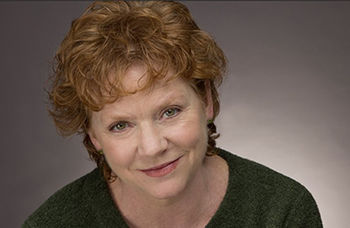 1975 WKU alumna Becky Ann Baker was recently nominated for her first Primetime Emmy award. She is nominated in the category guest actress in a comedy series, for her role in the HBO show "Girls." (Photograph provided by Baker)

WKU alumna Becky Ann Baker was in a recording studio July 13 when she received a text about her Primetime Emmy nomination.

To the confusion of the other people in the studio, Baker started jumping up and down and crying after Dunham followed up the text with a phone call. Baker said she didn’t even know the nominations were coming out that day and never imagined being selected.

Baker was nominated in the category of guest actress in a comedy series for her role in “Girls” as Loreen Horvath, mother of lead character Hannah who is played by Lena Dunham. Baker has made appearances in 20 episodes of the six season show since 2012.

The show revolves around the lives of a group of girls in their early 20’s and Baker said it shows humor in the different types of obstacles the new generations face. As a mother herself, Baker said it has also showed the new relationship between parents and children.

The final season of “Girls” aired in Feb. 2017 and Baker said she will “miss it terribly,” and hopes to find another project with the same level of writing.

The Primetime Emmy awards air Sept. 17; however, guest actor and actress awards are presented a week before in the creative awards.

Performing arts have always played a role in Baker’s life. She started in ballet at 8 years old and became a theatre major with a dance minor when she came to WKU.

“I always knew that (performing) was what I wanted to do,” Baker said.

Baker graduated from the university in 1975 and said while she was there, the theatre and dance department were making a lot of changes. William Leonard became director during Baker’s first year which she said created a fresh start.

Baker said the department has changed its focus from purely training students to teach theatre to training professional performers.

While at WKU Baker said she had many opportunities to be on stage in multiple platforms such as musical theatre and dance. She credits some of her recent success to having those opportunities in college.

When asked if she could pinpoint a single moment or project that defined her career, Baker laughed.

“Everything leads to everything else,” she said. “They are all stepping stones and you learn so much from every show.”

When she graduated and moved to New York City to pursue her acting career, Baker said she didn’t know many WKU alumni in the business. Now she said there are many people in the industry to guide graduates and she is often introduced to students faculty thinks have potential.

Julie Pride, WKU theatre and dance department accompanist and publicist, said the alumni network has several successful performer. Some graduates of the program include Emily Althaus from “Orange is the New Black,” Adam Perry who was recently cast in the Broadway production of “Frozen” and Derek Wilson from “Preacher.”

The department offers an opportunity for seniors to put on a showcase in New York City which connects them with casting directors as well as useful alumni. Pride said the course performing arts career seminar emphasizes making connections and always being aware of the impression you are making.

Pride said the amount of productions done at WKU helps students learn to be a performer but also get them involved with behind the scenes work.

Baker said WKU has been a great advocate of the arts based off the success from the photojournalism and theatre departments. Baker emphasized acting is primarily storytelling but is also a great outlet for expression.

“Arts are so important as a community culturally,” Baker said. “Without it, it’s a pretty drab society.”