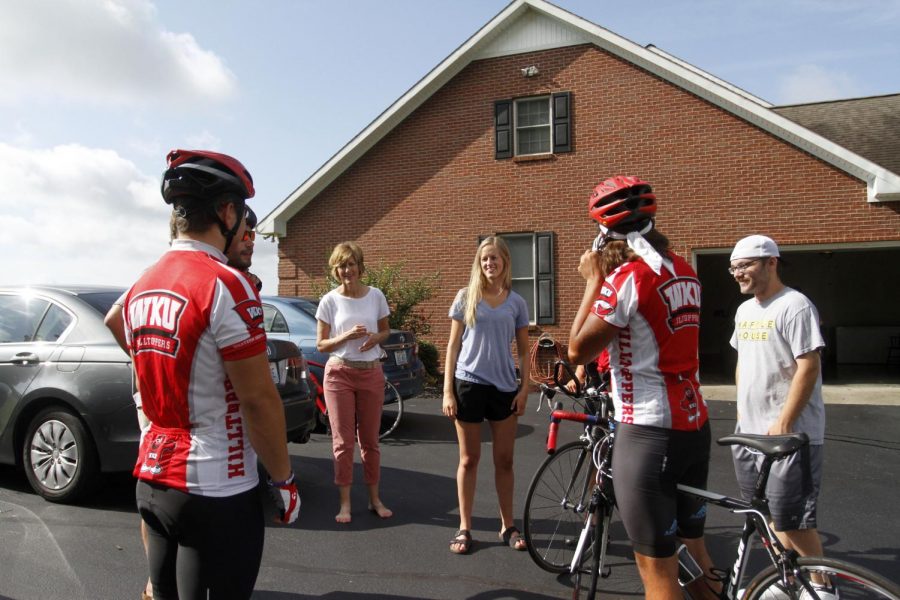 The team talks with hosts, WKU senior Amelia and her mother Angela Little, after a team prayer. On a typical morning, the Bike4Alz team will wake up at 6a.m to get ready and start their daily ride. Rebekah Alvey/WKU Herald

After departing for California in May, seven fraternity members have biked their way back to Kentucky today on their trek to end Alzheimer’s disease.

Bike4Alz is a team of WKU Phi Gamma Delta (Fiji) members who bike from California to Virginia to raise money and awareness for Alzheimer’s. Along the 3,600 mile journey, the team will stop for fundraising events and opportunities to meet people who have been impacted by the disease.

Louisville junior Tommy Sullivan, a driver on the trip, said the fraternity allocates all funds towards research at Alzheimer’s Association. After Bike4Alz was created by a fraternity member in 2010, the fraternity has held a ride every other year with new members and a new route.

This year marks the fifth ride and the first consecutive trip. Sullivan said the shorter planning period presented new challenges but having rides every year will strengthen ties with the people, sponsors and cities they visit.

Sullivan said Bike4Alz also hopes to create a board of sponsors and team members that stay consistent each year. Sullivan said the upcoming years are “uncharted territory,” because of all the changes.

One challenge the team has is finding housing for each location. In a day, they bike about 80 miles before driving to where they are staying. Louisville junior Adam Moore, another driver on the trip, said finding housing can be last minute.

Before biking from Hopkinsville to Bowling Green, the team stayed with the Little’s who live in Elkton. Sullivan said some of the team slept in beds which were a luxury. If the team cannot stay in a house, they will sleep on the floor of churches or even camp in tents.

Every morning after eating breakfast and getting ready, the team shoots a Facebook live video where they provide updates on the ride and their daily dedications. On the site, supporters can dedicate a day of the ride to people they know who have been impacted by Alzheimer’s.

After a prayer, the team sets off to their first rest stop. On a normal day, they will break the 80-mile trek into about 20 miles segments.

Today’s ride was nostalgic for the team because it was the same one they did four months ago as practice. This year’s president of Bike4Alz Louisville junior Logan Carroll said during the practice ride they were riding about 15 miles per hour. Today they went 20.

Grant County junior Conrad Jaconette said they have become physically stronger, but they now have more stories and knowledge to inspire them.

Through events and community outreach the team has been able to visit senior living communities as well as families, patients and caregivers impacted by Alzheimer’s. Louisville junior Alex Houlton said it had been a blessing to meet people who inspire their ride.

Carroll said while they were in Kansas, a man who had just lost a family member to Alzheimer’s reached out to the team and did a community ride with them from Topeka to Kansas City. The team said there had been a lot of support along the way.

“I’ve been surprised, pleasantly, with the amount of helpful, pleasant and gracious people we have met,” Moore said. “People who relate to what we are doing because almost everyone in 2017 has some relation to Alzheimer’s disease.”

Jaconette said the trip has been tough, but it was rewarding to be back where they started. Thursday night from 5-7 p.m. the team will have a silent auction, barbecue and raffle set up at the SoKy Marketplace as an opportunity to raise money and reach out to the community.

Throughout the upcoming week, the team has set up events in other cities within the state such as Louisville and Lexington. Sullivan said he is looking forward to seeing friends and family. The team put a lot of work into planning events in the state because there are more connections, and because people are more likely to donate or sponsor the team.

The team still has about two and a half weeks of biking before they reach their final destination in Virginia Beach. You can continue to follow the teams progress online and through our interactive map which links to the Bike4Alz blog posts.