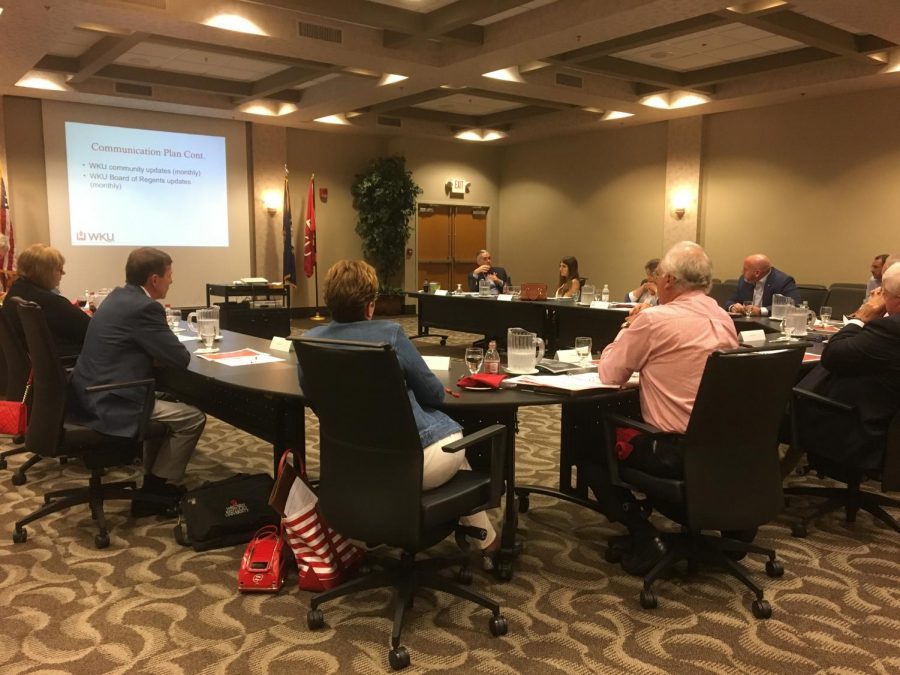 Members from the Board of Regents gathered at the Knicely Conference Center for an annual retreat where they discussed WKU's mission and strategic plan for the next year. Rebekah Alvey/WKU Herald

The purpose and role of WKU in students’ lives were discussed during the WKU Board of Regents’ annual retreat Thursday as President Timothy C. Caboni unveiled a draft for a nine-month strategic planning process.

The retreat opened with a keynote presentation by James Lang, professor of English and director of the Center for Teaching Excellence at Assumption College, about minor classroom changes that can increase student learning. Lang’s ideas played a role in later discussion as incoming board Chair Phillip W. Bale said he hopes to put an emphasis on student learning.

Caboni explained that students in this category are either dropping out or transferring to another institution, such as a community college.

“I’m afraid we’re coming to the conclusion that, because of scarce resources, we can’t be everything to everybody,” Ridley said. “It’s sad but we are really going to need to tighten our objectives for the future.”

The board discussed the possibility of increasing admission requirements as well as what the university can do to help students. Caboni said WKU has already started to work on advising, aid strategy and working with underrepresented minority students.

To conclude discussions on retention and the direction of the university, Caboni cited the most recent spring commencement, where a third of students stood up to be recognized as first-generation college students.

“That’s not just a special moment,” Caboni said. “That’s who we are as a university and we cannot and will not lose the commitment to student success, no matter what their background is. But we have to make sure that it’s the right fit for those students.”

After discussing retention and graduation rates, Caboni led a presentation and discussion on the upcoming strategic planning process, which is expected to last nine months. Caboni said he hopes everyone with a stake in the university is engaged through the process.

The presentation included revising a working mission statement for the university, the goals of strategic planning and explaining what will happen throughout the process. Caboni said that there will be a steering committee led by him and another co-chair.

The rest of the committee will be appointed to “working groups,” which will focus on different aspects of the university such as academic innovation and excellence. The committee will include members from different stakeholder groups such as students and alumni.

To conclude the retreat, Bale presented the board with a “charge.” Bale said he hopes to see more of the discussion and engagement that happened in Thursday’s meeting.

“We need to revisit our real purpose, which is student learning,” Bale said.

Bale also emphasized the board’s role during the strategic planning as an accountable and active advocate of the public while maintaining a strong and healthy relationship with Caboni.

The board will hold its quarterly meeting at 8:00 a.m. Friday in the Cornelius A. Martin Regents Room in Jody Richards Hall.