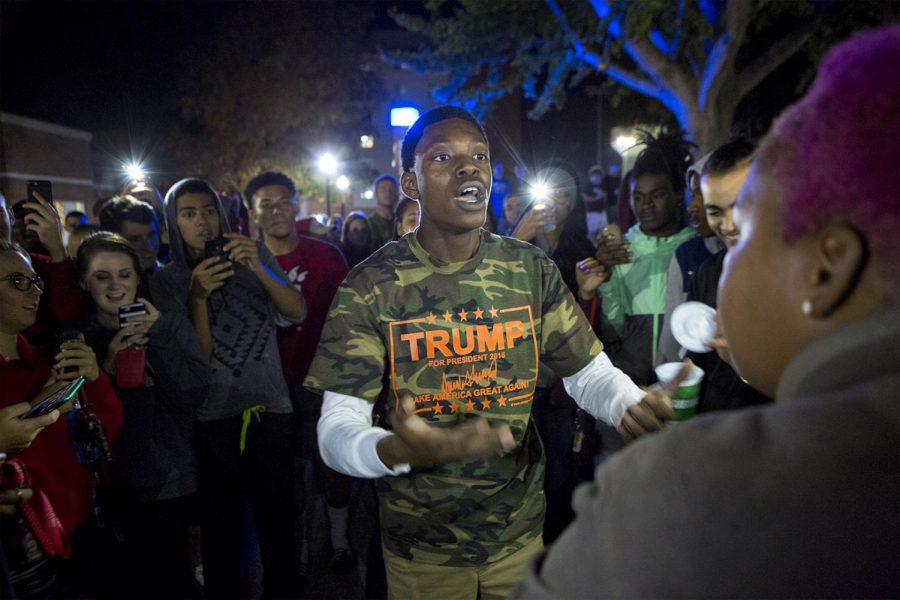 Nate Washington, a former political science major and president of the WKU chapter of College Republicans, argues with KeKe White, 18 during an anti-Trump protest on Nov. 9, 2016, outside of Pearce-Ford Tower. A recording of Washington using derogatory terms while serving as intern to U.S. Sen. Tom Cotton, R-Ark., was posted in an article by Mediaite. Kelsea Hobbs/HERALD

A recording of a former WKU student was released in an article by Mediaite in June which included derogatory terms.

Nate Washington, the former president of WKU college Republicans, was an intern for Arkansas Senator Tom Cotton January up to last week. In the Mediaite article, Washington called Speaker Paul Ryan a “cuck” and the British “fa****s.”

The recording also brought up current immigration policy which Washington admitted to being a “bigot” towards Muslims. In a previous Talisman article, Washington expressed his support for a vetting policy for refugees.

Caleb Ecarma, who wrote the Mediaite article, said he had heard about Washington making “off the cuff” comments from other staff members in Washington D.C. Ecarma said some of the “worst” comments made by Washington were done on social media.

In an interview with the Herald, Washington said the Mediaite article is an example of “fake news” and the recording was done without his or his roommate’s knowledge. The recording also happened at an intern social where Washington said he had been drinking and the comments were made while he was intoxicated.

The Mediaite article received a lot of negative attention from other media sources. Ecarma said the main critique he has received is the story wasn’t relevant because of Washington’s job as an intern.

Ecarma said he chose to write about Washington because of the frequent interaction office interns have with constituents. He said he saw a problem with someone openly expressing “bigoted” comments which reflect back on the office they represent.

Washington said he was not fired from his internship; although, Ecarma said otherwise. A communications representative from Senator Cotton’s office said the office does not comment on personnel issues, but Washington is no longer an intern with the office.

Washington said he was offered an internship with the Daily Caller News Foundation in the fundraising department.

Washington would have been a senior this year at WKU. However, he said he transferred to George Washington University in Washington D.C and plans to graduate in 2019.

A representative from George Washington University was contacted and said the university could not disclose information on any individual student enrollment.