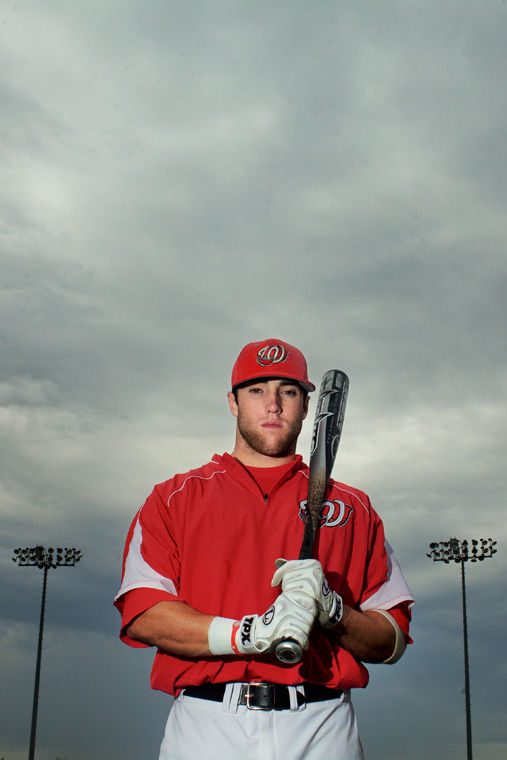 SAINT PAUL, Minn. — Kes Carter’s baseball talents are now being put to use in the Twin Cities.

Due up with one out in the bottom of the ninth inning and the scoreboard knotted at 5-5 for the St. Paul Saints on Friday night, Carter, the former Western Kentucky centerfielder, swung at a fastball down the middle and sent it over the right field wall to give his new team a 6-5 walk-off victory in its series opener against the Fargo-Moorhead RedHawks at CHS Field.

Carter has been a Saint for just 14 days after signing with the American Association of Independent Baseball program July 1. Before being picked up by the Minnesota club, the outfielder was on Fargo-Moorhead’s roster before being released on June 30.

Not only did Carter’s bomb against his former club help snap St. Paul’s four-game losing streak, but it also provided a glimpse of how effective the former Western Kentucky University star can be wherever he plays — even in front of 9,054 fans.

“What’s funny is that I started with (Fargo-Moorhead),” Carter said following the game. “They released me and I came over here (to St. Paul). The fans are here and they show up – and that was a big reason why I was able to hit that ball tonight. This crowd has been coming to these games for a long time — even in the older stadium. They’re always behind our bats the whole way, and I’m glad I could do that for them tonight.”

Carter, who was a Hilltopper from 2008-11, remains the highest drafted player out of WKU after being selected 56th overall in the 2011 MLB Draft by the Tampa Bay Rays. Prior to making his way to Western, he was drafted in the 43rd round of the 2008 MLB Draft by the Florida Marlins, but chose to not sign and attend college — and he said he will forever be happy with the decision.

“I really didn’t know about the draft process coming out of high school,” Carter said. “I didn’t really get too much notoriety on getting drafted and how stuff goes. I feel like I made the right choice and everything worked out. God has a plan for everybody.”

Following a standout career at WKU, Carter began his career in the Rays organization with the Hudson Valley Renegades, playing in just three games before being placed on the disabled list with a shin injury. He really got his start with the Class-A Bowling Green Hot Rods in 2012, whose ballpark is just minutes away from where Carter played college ball.

Throughout his two stints with Bowling Green, Carter had the opportunity to play with former Hilltopper teammate Matt Rice again, which he says was a time he’ll always remember.

“My boy Matt Rice … It was awesome getting to play with ‘Ricey’ on the Hot Rods,” Carter said. “It was great. First of all playing together at Western Kentucky helped us build a strong bond. He ended up hanging it up — had an eye-opening experience and got his law degree. He’s about to move to Washington, D.C., to get into politics.

“I told him he could be the mayor of Bowling Green. But playing professionally in the town I played college baseball at was such a privilege.”

After performing well enough with the Hot Rods to be promoted to the High-A Charlotte Stonecrabs, where he played the entire 2013 season and the first part of 2014, Carter was called up again — this time to the Double-A Montgomery Biscuits. He played for them until being released by the Rays organization on May 7, 2015.

Following his release from Tampa Bay, Carter was away from baseball for nine months before learning of an opening on Fargo-Moorhead’s roster through a friend on the team.

“After I got released, I didn’t really know what I wanted to do,” Carter said. “It was selfish of me, but I took some time off after I got released from the Rays. I didn’t really know if I wanted to continue my career, but I ended up thinking about it long and hard and stuck with it. I got in touch with a buddy on the RedHawks, and now I find myself here in St. Paul.”

Although he has been bounced around, Carter remains humble and says he will always thank WKU and the relationships he made on The Hill for shaping him into the man he is today.

“I made a lot of good friendships up there and met a lot of great guys that I still keep in touch with to this day,” he said. “The coaching staff I had and everyone that surrounded the baseball program was great. All of my memories from there are great. To experience college at a place just an hour south of my high school in Nashville was great. It was an overall great experience for me.”