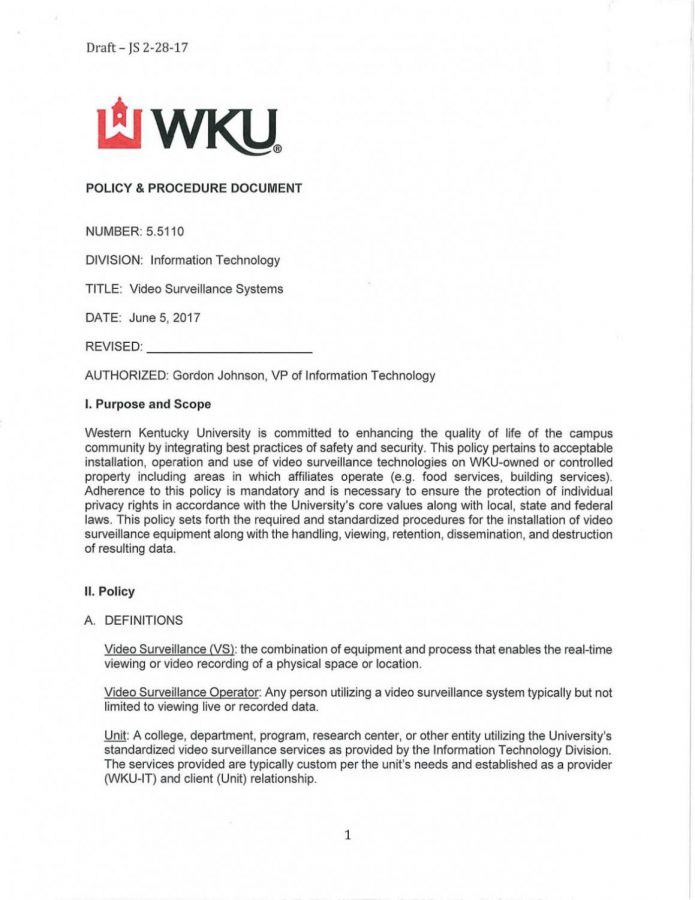 In an email Monday to all faculty and staff, President Gary Ransdell discussed four changes to campus.

Ransdell announced the resignation of Marc Archambault, the previous vice president for Development and Alumni Relations. Archambault will continue continue to serve as the executive officer of the WKU Foundation through Dec. 2017.

Ransdell said John Paul Blair, the former lead development officer for WKU, will serve as interim vice president for Development and Alumni Relations and will be working with President-Elect Tim Caboni until a permanent decision is made.

In addition to the announcement, Ransdell thanked Archambault for his service to WKU and encouraged faculty and staff to work with Blair as the university will, “place greater importance on private support in the financial profile of WKU.”

In the email, Ransdell addressed the lack of a concrete policy and operating procedure for video surveillance systems on campus. He announced the Administrative Council approved a policy and procedures document to fill this need and attached the document to the email.

Employees were encouraged to learn and understand the document to contribute to a safe campus.

At the end of the spring semester, Ransdell authorized the recommendations of David Lee, provost and vice president for Academic Affairs , Larry Snyder, dean of the Potter College of Arts and Letters and Rob Hale, the head of the English Department to make Mary Ellen Miller the first WKU Poet Laureate. Miller has been a WKU faculty member for 53 years.

Ransdell recognized Miller’s accomplishments and congratulated her on her appointment in the email.

Ransdell announced  his appointment of Lee, to University Historian. Ransdell said the title is rare, but Lee has been involved with the university’s history for a long time.

Lee will transition into the position when he chooses to complete his current role as Provost. As University Historian, Lee will primarily be responsible for updating the history of WKU, which Ransdell said has not been done since 1986.