A review of voices: fight for fairness 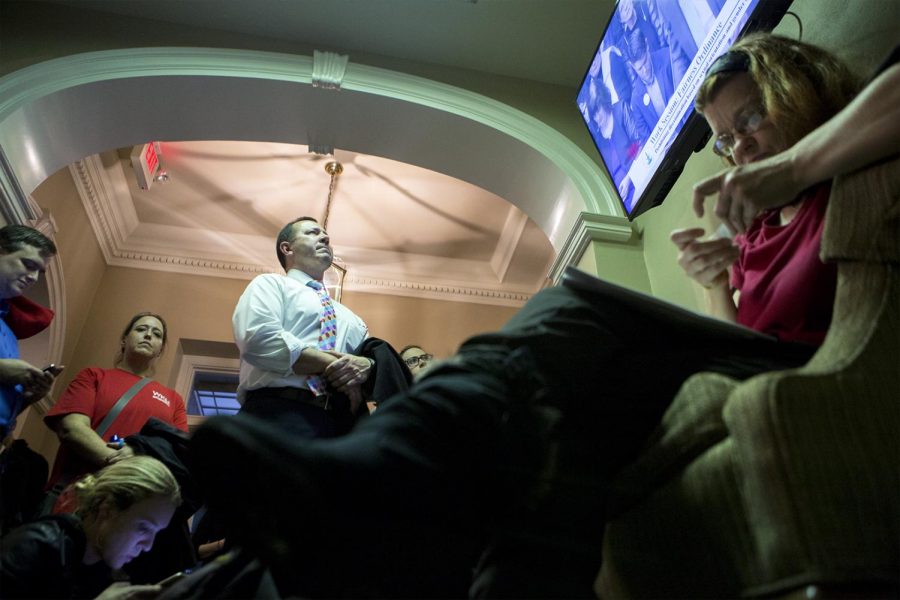 Community members listen as Grayson Hunt, of BG Fairness and the Black Lives Matter coalition, speak to the City Commissioners about a fairness ordinance on March 7 at City Hall.

Just over three months ago, a reading of the fairness ordinance was on the agenda of a Bowling Green City Commission meeting for the first time. On Feb. 21, citizens filled the usually vacant folding chairs in City Hall, waiting to witness the results of the proposal.

As the words of the ordinance were read aloud before the commissioners, chants demanding fairness could be heard from the overflow of supporters standing in the streets below the windows.

Commissioner Brian “Slim” Nash moved to approve the ordinance. Mayor Bruce Wilkerson paused for a moment, glancing at the commissioners beside him, before announcing the motion would not move forward for lack of a second.

Patti Minter, an active member of the Bowling Green Fairness coalition, was sitting in a row near the front of the room next to WKU Student Government Association President Jay Todd Richey. Both had been prepared to speak at the podium in favor of the ordinance.

When Minter realized the proposal wouldn’t even be up for discussion, she felt chills through her body as voices behind her started chanting “shame, shame,” reflecting the anger and disappointment of supporters.

“To walk outside and see that chanting crowd and the raw emotion on their faces, I’ll never forget it,” Minter said. “It was one of the most powerful moments of my life as an activist for human rights. I’ll never forget that.”

American citizens are legally protected against discrimination based on race, color, religion, sex or national origin, thanks to the Civil Rights Act of 1964. A fairness ordinance would add sexual orientation and gender identity to the list in Bowling Green and protect city’s LGBT residents from discrimination, specifically in employment, housing and public accommodations.

Some argue such discrimination against the LGBT community does not exist in Bowling Green, thus making the ordinance unnecessary.

“It makes sense you’re not going to have massive waves of people coming forward to talk about their experiences with discrimination when they are still in a legally vulnerable position,” WKU senior James Line said. “We don’t have cases because you can’t file a lawsuit—because it’s completely legal.”

According to research by the Williams Institute at the University of California, Los Angeles, which is dedicated to research on sexual orientation and gender identity law and public policy, economic vulnerability of LGBT individuals in Kentucky is significantly higher than that of non-LGBT individuals.

Without the ordinance, discrimination based on perceived sexuality is also legal. Last May, a firefighter filed a lawsuit against the Bowling Green Fire Department on allegations of religious discrimination and sexual harassment, including derogatory comments based on his “failure to conform to gender norms,” according to the complaint.

“The city commissioners would have had the chance to listen to [a case of discrimination] at the last commission meeting if they hadn’t shut the meeting down and ran out the back door,” Line said, referring to a Bowling Green resident who had come to the meeting prepared to speak about discrimination he had experienced in a hostile work environment because of his identity.

During the 2016 November election, three city commissioner candidates openly supported passing a fairness ordinance during their campaign, and were endorsed  by the Bowling Green Fairness Coalition: Ryan Fulkerson, Nate Morguelan and Andrew Manley. None of them were elected.

Members of the Bowling Green community have been fighting to have an ordinance passed since 1999, when the Human Rights Commission first proposed the ordiance—the same year it was passed in Louisville, Lexington and Henderson.

As they would for the following 16 years, the city commissioners virtually ignored the call for fairness.

Despite a lack of response from the commissioners, supporters continued to urge passing the ordinance and to show up at the bimonthly city meetings to speak in favor since 2012.

When the motion failed to receive a second on Feb. 21, Nash put the ordinance on the schedule for a work session at the next meeting, giving citizens a chance to speak about it without needing a second for discussion.

At the work session on March 7, more than 50 people showed up to speak in support of the ordinance. Speakers urged the commissioners to pass the ordinance, sharing personal experiences as well as stories of friends and family members who had dealt with discrimination based on their sexual orientation.

“One of my concerns is that were these laws are passed at a state or local level, they put rights of religious freedom and conscience into crosshairs,” Wood said, mentioning a business owner who was fined for refusing to bake a wedding cake for a lesbian couple.

“This proposed ordinance before you tonight is called the fairness law, but is it really fair…? Would this be fair to the people of Bowling Green, to the residents here, who operate businesses according to their religious convictions?” Wood asked, finishing his statement by urging the commissioners to vote against the ordinance.

Community member Lisa Goldy said she was there “to speak for those who do not have a voice” in favor of the ordinance. She spoke of violence she has witnessed against LGBTQ youth in schools, which she compared to patterns of violence faced by other marginalized groups over time.

“What is the thing to do?” Goldy asked, answering herself: “Include sexual orientation as a protected status on discrimination policies and statements. It needs to be explicit. It needs to be visible, and it needs to be consistently enforced.”

Currently, eight cities in Kentucky have a fairness ordinance in place. Bowling Green is the largest city in Kentucky without an ordinance. In a statement to WBKO, Commissioner Sue Parrigin expressed her belief the decision should be made at the state level.

Minter believes this defense as well as the few others she has heard are straw man arguments and provide a way to “duck the real issue.”

Minter said the eight cities with an ordinance saw only positive effects of putting the ordinance into place.

“It’s not just about having a law in the books,” said Line, who has spoken twice at meetings in favor of the ordinance. “It’s about establishing a culture of acceptance in Bowling Green and taking a very significant step toward saying discrimination is not okay. Because Bowling Green has not taken that step yet, a lot of people feel this city is not welcoming to them.”

Line said he believes the commissioners may justify their opposition to the ordinance by saying support comes mainly from WKU students.

“I think this is something that’s very rooted in the community,” Line said. “It’s a really broad, diverse movement. Students are a part of that, but they’re not the driving force.”

In response to Parrigin, Minter said the local level is a very appropriate place to put forth the ordinance.

“When you’re the ninth city to do something, you’re hardly on the leading edge,” Minter said. “You’re playing catchup.”

Following the commissioners’ failure to pass the fairness ordinance in February, members of Bowling Green Fairness continued to show up to meetings to speak during public comment in support of the ordinance, as they had for years.

On March 21, Sue Parrigin made a motion to move the public comment portion to the end of the city commission meetings.

Nash spoke against the motion, saying moving the public comment section creates an inconsistent start time to those public comments, inconveniencing those who wish to speak.

“The goal of the public comment section, and what I believe should be the goal of the city commission is to receive feedback from the citizens,” he said, adding that creating an inconsistent start time to public comment could potentially further drive down voter participation.

Nash said he saw the motion as a way of trying to reduce the number of people who show up to speak.

“I think that those that speak before the city commission in the public comment section are often the marginalized people who are in our community,” he said. “They have an opportunity to stand at that podium and make their argument, whether that’s the first time or the fifteenth time or the hundredth time that they make that—that’s the beautiful thing about American is that they can do so.”

Commissioner Williams said he thought the commissioners should prioritize the business of the city and fulfilling their duty as the voice of the city, and taking care of other business before public comment would do so.

After further discussion, the motion passed, with only one vote against, which came from Nash.

Despite the new regulation, Bowling Green Fairness advocates continue to show up to speak at the meetings to urge the commissioners to pass the ordinance. Though Nash said it’s too early to tell if the time change affected the number of speakers able to show up, he does not believe anything will deter the supporters from continuing to speak out.

Looking forward, Nash said he plans to continue to meet with individuals and groups who he thinks can help influence the decision of the commissioners voting against the ordinance, including business owners and religious groups.

Though the ordinance is not currently on the city commission’s agenda, Nash said he is continuing to work to see its eventual passage.

“It’s going to be a long ride here in Bowling Green,” Line said. “I’m fully confident that most people in the city are supportive; it’s just a matter of getting the political leadership to catch up.”