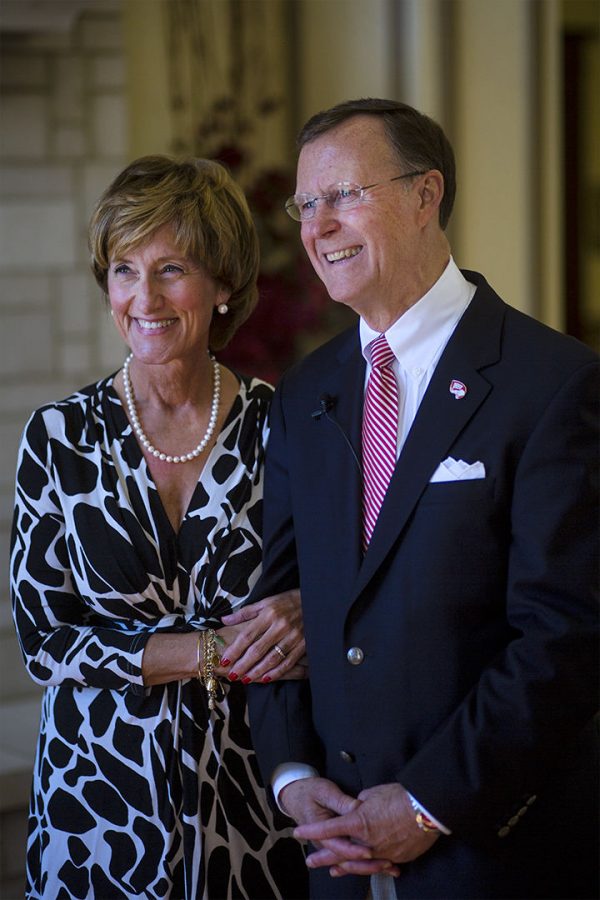 President Gary and Julie Randsdell stop to talk employees, students and faculty as their retirement party draws to a close on Tuesday at the Alumni Center.

Students, faculty and staff gathered in the Augenstein Alumni Center Tuesday afternoon to honor and thank President Gary Ransdell and his wife Julie Ransdell  one more time for their 20 years of leadership at WKU.

Ginny Hensley, director of alumni engagement and relations, said this celebration was made a little more special because of all the work Ransdell has done for WKU and the community.

Provost David Lee, President of the Kentucky Council for Postsecondary Education Robert King and senior Ellen Linder all made remarks at the reception on Ransdell’s impact and the legacy he will be leaving at WKU.

Lee said Ransdell had brought an exciting vision of what is possible for WKU. One of his initiatives was expanding WKU to be a leading university; King said Ransdell has lived up to the name “Leading University with International Reach.”

“He transformed an almost deserted hillside into a college campus,” Lee said.

King said the biggest impact Ransdell has had was giving the university a confidence in its ability to produce superb graduates and compete on an international level.

After working with Ransdell for nine years, King said he is undoubtedly going to miss him.

King, who works with all Kentucky university presidents, explained that despite competing interests on other campuses, Ransdell has been successful at balancing doing what is best for the university and the state.

King said when he thinks of the Ransdells, the words “destination” and “destiny” come to mind. He explained while most people see the presidency at WKU as a stepping stone, the Ransdells were where they genuinely wanted to be and have had an extraordinary love for the university.

When they arrived, he said, there was a vision for the destiny of the university which has now been achieved.

Linder, who serves as the Spirit Master chair, spoke about how Ransdell has been active in student life.

In her remarks Linder said Ransdell found time to make relationships with students, listen to their problems and make changes to solve them. She also recalled how Julie Ransdell, through her assistance with Spirit Masters, has encouraged Linder to see the beauty and potential in everyone.

Linder also recalled a time when Ransdell spoke with the Spirit Masters during a retreat. She explained how he motivated them with the phrase “be all in.”

“He was all in for making WKU a better place for us,” Linder said.

Linder said her graduation would be bittersweet, especially knowing Ransdell is leaving as well.

At the end of the event, the Ransdells were presented with the first of many volumes of memories and notes written by faculty, staff and students.

President Ransdell’s official last day will be July 1. Ransdell said he still has a to-do list and is checking things off every day with no intention to rest until his final hour.

Ransdell emphasized the importance of having a transition in the presidency that is healthy, positive and fun. He said it is important to understand that next semester will be Caboni’s presidency and leadership, and he will have the support of the Ransdells.

King said he has met Caboni and will be working with him to become oriented. He said it is important he begins his presidency in a fundamentally healthy and positive environment.

Lee said Caboni would be bringing his own vision to WKU, but there is a lot of momentum from Ransdell Caboni can channel.

Ransdell spoke about the events of the past year, which he said have been fun but also emotional with so many lasts.

Ransdell said he wants all of the students to be all in and control their destiny.

“This is about you,” Ransdell said, echoing his statement at the Board of Regents meeting 20 years ago after being selected as WKU’s ninth president.