Pawlowski and the Hilltoppers eager for 2017 season to start 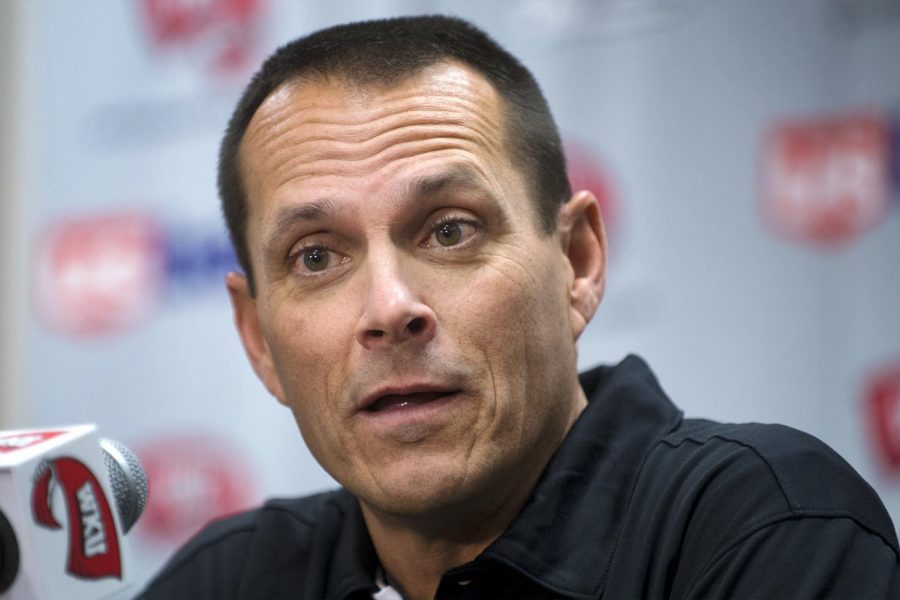 Second year head coach John Pawlowski speaks during the media day on Tuesday at E.A. Diddle Arena. "I'm excited about 2017 and looking for the challenges that lie ahead. When you look up and down our roster, you're going to see 19 new faces on our team." Pawlowski said. Matt Lunsford / Herald

Fresh off a 24-30 season and missing the conference tournament for a second consecutive season, the Tops will attempt to build on their trying 2016 season.

One goal coach Pawlowski emphasized during media day on Tuesday was the importance of qualifying for the conference tournament. It’s a milestone the program has failed to reach since moving from the Sun Belt to C-USA.

“In the two years in the conference, we haven’t earned any stripes yet,” Pawlowski said. “We need to make some headway in the conference. It’s a challenge. It’s a balancing act. We definitely want to win now.”

To return to the postseason, the Tops will rely on many new faces. WKU has 19 new roster additions since the end of last season. Many junior college players will be looked upon to fill the voids left by graduating seniors.

“When you look up and down our roster, you’re going to see, I believe it’s 19 new faces on our team,” Pawlowski said. “You know, anytime you take over a program, you know there’s going to be changes and things as we try to move the program forward. But I’m certainly excited about how hard our guys have worked.”

With so much roster turnover, inter squad competition has been a direct focus of the coaching staff during the off-season. Players have worked tirelessly to earn open spots in the starting nine.

Roster turnover can plague teams at the start of each spring. However, Pawlowski sang a more positive tune during media day. The Tops’ focus is to find the right lineup to form into a winning team so they can consistently compete for conference titles. After being picked to finish last in the C-USA preseason poll, the Tops are anxious to get the season underway and prove doubters wrong.

Redshirt senior pitcher Jackson Sowell says the Tops aren’t focused on what other people say about the team. Instead, he said the team has used it as motivation to fuel the flame.

The Tops won’t just be starting the season with a new-look team, but a new-look playing surface.

During the offseason, Nick Denes Field underwent a facelift as the grass playing surface was removed and replaced with turf. Both the players and coaching staff gave raving reviews of the new turf. The new surface will not only affect the Tops strategy on the field during games, but in preparing for inclement weather as well.

Pawlowski is especially excited about not having to worry about preparing for a rainy day anymore.

“We’ve all played on turf before so it’s really nothing new to all of us, but we love it,” Peter said. “We don’t have to rake after BP [batting practice] anymore. We don’t have to do all that stuff. It’s pretty awesome. We’re really lucky to have it.”

With so much optimism coming from within the program, the Tops are ready to exceed expectations. Last season, WKU won three games against SEC opponents. This season, the Tops have four benchmark games against strong out-of-conference competition. National powerhouses Louisville and Vanderbilt will test the new-look Tops. Pawlowski’s squad also has two games scheduled against instate rival Kentucky.

Peter understands the challenges the team faces heading into the season.

“It’s a big season,” Peter said. “I’ve had a lot of bad luck in the past. At the end of last year, I had a lot of talks … with a lot of the older guys … We knew we were going to come back for one more year and give this thing a shot. Wherever coach needs me, whatever I need to do, I’m going to do whatever I can to get this team a win.”

The Tops will break in their new turf on February  17 during a three-game homestand against Valparaiso.