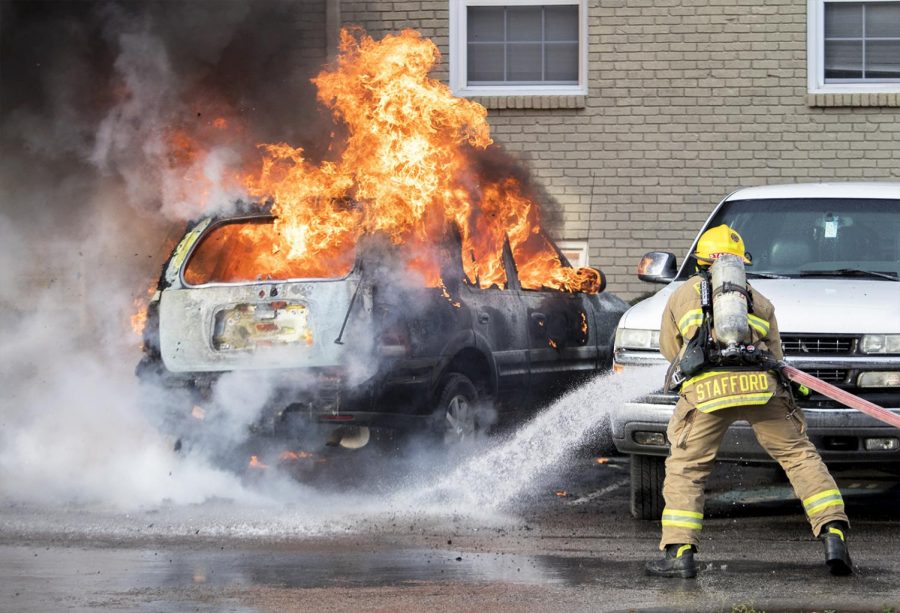 Chris Stafford, 28, of Bowling Green, arrives at the scene of the burning vehicle outside of CampusWalk apartments next by Hilligans. Stafford takes ahold of the fire hose to put out the fire.

A burning car outside CampusWalk Apartments by Hilligans drew response from Bowling Green Fire Department around 6 p.m. on Tuesday.

When firefighters arrived at the scene, the car was engulfed in flames.

Sophomore Ayla Hendrickson, 20, a special education major, was the owner of the damaged 2005 Buick Rainier.

Hendrickson had parked her car after she saw smoke coming out of the dash. She went to find a mechanic and returned to find her car on fire. Hendrickson is not sure what caused the fire.

She said she was in shock as the fire department prepared to handle the vehicle fire.

Troy Armentrout, 26, said he was inside of Hilligans when he heard that the car was smoking.

Firefighter Chris Stafford, put out the fire of the burning vehicle. Stafford and his team were first to respond from Central Fire District (Station 1).

The cause of the fire is still unknown at this time.