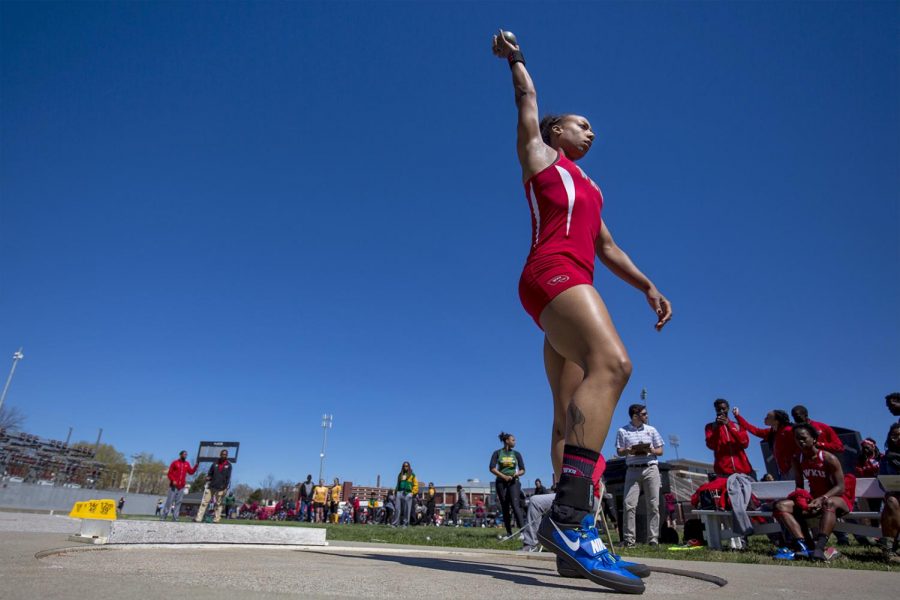 Senior thrower Jenessa Jackson from Marietta, Georgia prepares for shotput during the Hilltopper relays on Friday, at the Charles M. Reuter Track and Field Complex.

“I’m really happy on where we are as a team,” head coach Erik Jenkins said. “The Head Coach were a success as our athletes ran well.”

The 10 event titles came in a variety of events. The women’s team took home three titles, as Jadzia Beasley won the 100-meter dash with a time of 11.94 seconds, and teammates Kadijah Valentine (11.97) and Peli Alzola (12.04) finished second and third. Morgan McIntyre won the pole vault, clearing a height of 4.13 meters. That was the third-best mark in school history, and a PR for McIntyre. The ladies’ 4×100 team of Alzola, Sandra Akachukwu, Beasley and Valentine took first place as well, with a time of 45.47 seconds.

Ventavius Sears, who was one of 12 seniors honored during the senior day festivities, took home the long jump title with a distance of 7.57 meters, and the triple jump title with a mark of 16.06 meters, which was an outdoor PR for the All-American, as well as the third-best mark in school history.

Sears also helped lead the 4×100 meter relay team (alongside Morris, Dasor and Eli Minor) to victory with a time of 39.98. WKU’s B-team (William Bush, Austin Hayes, Corey Parks and Jonathan Hayden) finished right behind the A-team in second with a time of 40.43.

“That was good,” Sears said of the B-team finishing second. “We want the B-team to be just as good as the A-team because when we get to regionals, nationals, you never know what may happen, so you may have to switch it up sometimes. Coach wanted to make sure that everybody is able to be pull weight if you need to.”

The Hilltoppers didn’t just post PRs in first place finishes, though. Desmond Mobley set a PR in the high jump, hitting a mark of 2.11 meters, which was good for fifth place. Mobley also posted a PR in the triple jump, with a mark of 14.35 meters. He also finished second in the long jump with a distance of 7.47 meters, falling behind only Sears.

Catika Slay set a PR in the long jump, with a distance of 5.82 meters, which was good four fourth place.

Thrower Jenessa Jackson recorded three top-three finishes, as she finished second in the shot put with a throw of 14.39 meter.

“(This week) was better than last week, and as my coach stated last week this is the best start I’ve ever had, compared to previous years where I usually start about a meter and a half below my PR,” Jackson said of her shot put. “Right now I’ve just got to work on execution.”

Jackson also placed third in discus with a throw of 43.51 meters and third in the hammer throw with a mark of 54.32 meters.

This weekend, WKU will be splitting their teams up, sending some competitors to the Mt. SAC Relays, and others to the Austin Peay Invitational on April 14-15.