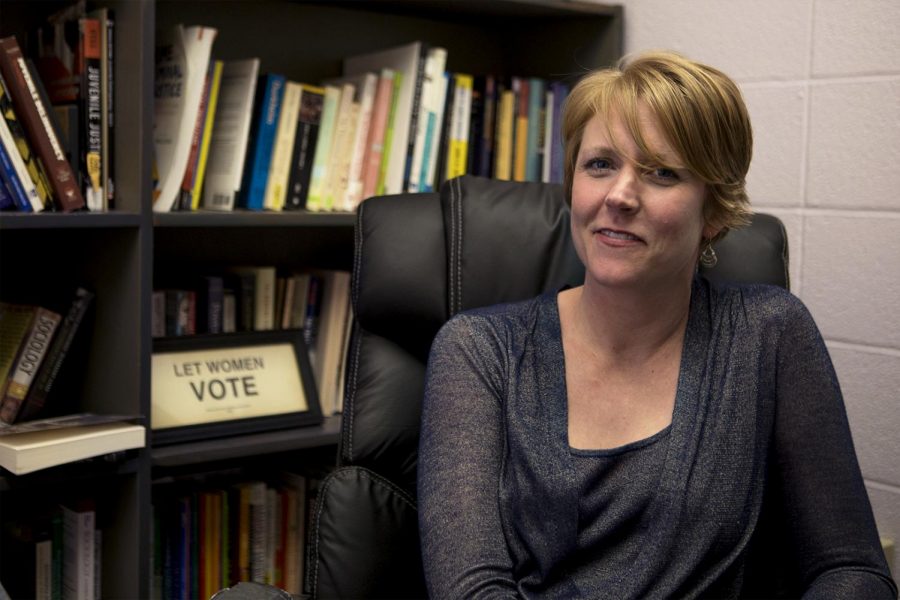 Dr. Holli Drummond, Professor of Sociology teaches courses over criminology and research methods. She is a student advisor and internship coordinator at WKU. Drummond was chosen to win the Potter College Student Advisement Award.

Drummond is honored to have been chosen for the award.

“When Dean Larry Snyder called to tell me I had won the award, I was ecstatic,” Drummond said. “I have served on the Potter College Awards committee in prior years and know the depth of talent represented annually for each award. Having relationships across campus, it is also nice to be honored alongside the winners of the Student Advising Award from other colleges. Specifically, student advising often feels like a very invisible role but one that is essential to the success of our graduates and, in relation, our job as scholar-mentors.”

Drummond is passionate about sociology and subjects within it and criminology, and her passion has won her other awards in the past.

“Juvenile delinquency, justice, and advocacy is the foundation of my professional knowledge and enjoyment,” she said. “Through my involvement with the community, mostly regarding issues of juvenile justice, I was selected as the Potter College winner of the 2011 Public Service award. This community involvement formed the foundation of my work as internship coordinator for the department.”

Drummond has worked with 95 student interns since 2013, placed in 53 different organizations. The internship program allows students to learn how to connect the skills they develop through their sociology and criminology studies to future careers.

Drummond explained why she decided to be a professor.

“ I knew I wanted to spend my life better understanding why people make the choices they make and the role their social influences play in that process,” she said. “At the end of nine and a half years of undergraduate and graduate coursework, I believed I had something to say to others about what I had learned and wanted to convey that knowledge to students similar to myself.”

In addition to teaching, advising and helping interns, Drummond has also conducted research on the influence of circumstance on adolescent perception and behavior.

“My academic interest in life for adolescents in America began when I was at the University of Alabama getting a master’s degree,” Drummond said. “In summer of both 1998 and 1999, I participated in data collection for a survey of adolescents growing up in concentrated disadvantage in Mobile and Pritchard, Alabama. I had always been intrigued by social cleavages,  which are a result of social class. However, seeing the challenges faced by kids growing up within urban disadvantage helped channel that interest toward a group whose lives, if improved, could lift up so many others.”

Owensboro senior Michael Shelton nominated Drummond for the award. He is majoring in psychology and criminology.

“I nominated Dr. Drummond for this particular award because she is so hardworking and because her guidance has really shaped my undergraduate time at WKU,” Shelton said. “I have seen Dr. Drummond’s skills in advising not just when it comes to class scheduling, but also when it comes to life, future careers, internships and graduate schools. I know that if she does this for me, she does it for all of her other advisees and that to me deserves recognition.”

Last semester, Shelton did an internship with the Department of Public Advocacy with a public defender. According to Shelton, Drummond helped him through the process.

“I didn’t even decide to pursue an internship until about three weeks before classes began and within a couple of days, Dr. Drummond had a placement for me and it was at my top choice of location,” he said.

According to Shelton, Drummond has had a significant impact on his life.

“She has been a driving force behind me discovering what my passions are and what I see myself doing for a career,” Shelton said. “She has opened so many doors for me and I have been able to experience so many different things because of her guidance.”