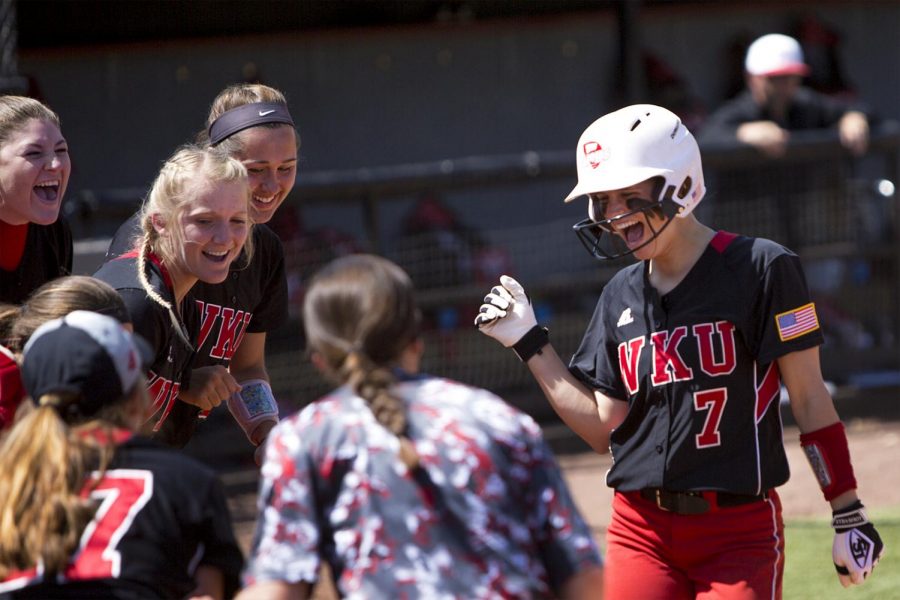 Sophomore infielder Rebekah Engelhardt (7) runs to home base after hitting a home run during WKU's 3-2 loss to UAB on March 2 at the WKU Softball Complex.

WKU Softball triumphed this weekend in a hard-fought series with University of Texas, El Paso. After splitting Saturday’s double header, the Lady Tops broke open Sunday’s scoreless affair in the eighth inning with a seven-run barrage.

The Miners brought their A-game during the first game of Saturday’s doubleheader, defeating the Lady Tops 10-2.

The Lady Tops fell behind 3-0 in of the first inning. The Miners added one more run to their total in the second inning. WKU broke through in the top of third inning behind two Jordan Mauch and Adarian Gray doubles cutting the deficit to 4-2.

The Miners responded in the bottom of the third pushing their lead back up to four runs. They never looked back from there tacking, on six more runs until the game’s completion.

WKU more than avenged its loss earlier in the day with a decisive 18-8 victory in five innings in the second leg of the doubleheader. All nine players reached base for the Lady Tops throughout the game.

Freshman Haylee Towers pitched a gem throwing five strikeouts in five innings of work. She also earned her sixth victory of the season.

”We talked about playing with pride and passion and playing the game as hard as you can, and everybody came out and played incredibly hard in that second game,” Tudor said. “Morgan [McElroy] took a hard hit to the face sliding into second and stayed in the game and then Kelsey [McGuffin] held onto that ball during the collision in the outfield; everybody just played hard. I know we put up a lot of runs, but that’s probably the most proud I’ve been of how hard we’ve played.”

The bats were still hot carrying over to Sunday. The Lady Tops outlasted the Miners winning 7-2.

Over the course of the crucial eighth inning, WKU sent 13 batters to the plate resulting in three doubles, four singles and two walks.

Mauch led off the top of the eighth with a single. Gray then smashed a ground-rule double moving Mauch over to third base putting her in scoring position. Kelsey McGuffin smacked a double to right-center field scoring both Topper baserunners. Freshman infielder Morgan McElroy then knocked in McGuffin with an RBI single resulting in a 3-0 lead. The Tops never looked back from there plating four more runs in the inning.

Carter had a fruitful day at the dish going 3-for-4 with one walk. Along with Carter, the Hilltoppers had six players register a two-hit day. Senior catcher Taylor Proctor, redshirt junior infielder Brittany Vaughn, Gray, Mauch and McElroy all had multi-hit games.

McGuffin and Vaughn both notched two RBI to lead the Tops.

Downing had another great outing pitching the entire game finishing with four strikeouts. After this weekend, she improved her overall record to 12-8 on the season.

The next game the 22-21 Hilltoppers will play is against inter-conference foe North Carolina, Charlotte. The game starts at 1 p.m. and will be played at the softball field in Bowling Green.

Correction: a previous version of this article said the Lady Toppers played at UTSA is past weekend. They actually played at UTEP. The Herald regrets this error.