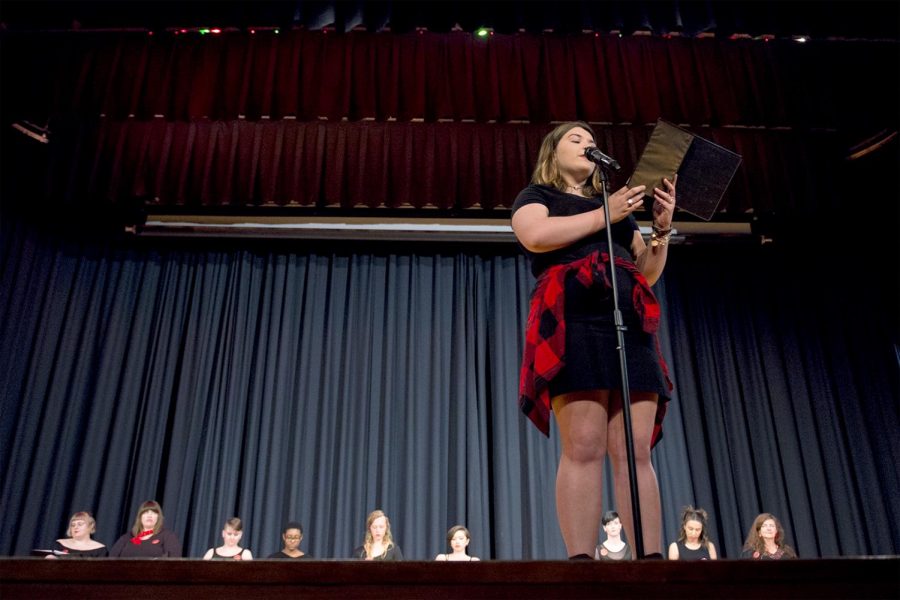 Ashley Hilger performs at WKU's "Vagina Monologues" on Monday. The monologues are presented by WKU's Gender and Women's Studies program. All proceeds from the performance were donated to Hope Harbor, a non-profit crisis counseling center that provides services to victims of sexual assault.

The lights dimmed. The performance was about to begin. Out of the 10 women onstage, three female students stepped to the front of the stage and announced “We’re worried about vaginas.”

At the WKU performance, all of the money raised from ticket sales and sales of vagina-shaped baked goods went to Hope Harbor, a sexual trauma recovery center in Bowling Green. Tickets were $7 at the door. At WKU this year, senior Katelyn Calhoun and junior Alyssa Javier co-directed “The Vagina Monologues.” They also performed in the production.

“When people volunteer their time and their effort for this, they’re doing something for a great cause because Hope Harbor is a great shelter, and we’re very fortunate to have one,” she said. Calhoun said Hope Harbor serves 10 counties in Kentucky, including Warren County.

Calhoun performed the monologue “My Short Skirt,” a monologue that intends to let the audience know a woman’s short skirt is not an invitation or excuse to touch or sexually assault her. It is meant to call attention to issues like catcalling, sexual harassment and rape culture. Calhoun chose to perform “My Short Skirt” because it is her favorite and it is also one of the newer additions to “The Vagina Monologues” written by Ensler.

Javier performed the monologue “Reclaiming Cunt,” which is a monologue that intends to cast the word in a different light and “reclaim” it.

Javier feels “The Vagina Monologues” allow women the chance to empower and relate to each other.

“The whole point of ‘Vagina Monologues’ is just to let women know we experience this, and if you feel the same way we do about our vaginas, then let’s talk about it in an open dialogue,” she said. “You don’t have to feel alone anymore about your vagina.”

One of the monologues, entitled “My Vagina Was My Village,” told the story of a Bosnian woman and the issues Bosnian women, especially refugees, faced during the war in Yugoslavia as they were raped as a tactic of war.

One monologue entitled “They Beat the Girl of my Boy (Or So They Tried)” speaks to issues involving the transgender community and the violence they face.

Sophomore Ebony Lee performed a monologue called “My Angry Vagina,” which intends to communicate the anger many women feel about tampons, douches, vaginal exams and other issues in an amusing way.

Lee said he hoped the audience walked away from the performance more informed about issues that affect women.

“I hope it brings awareness to issues like female genital mutilation and also problems that arise in the transgender community,” she said.

She said she also hoped the audience gained more knowledge about the issues women face.

“I hope they learn to respect women,” she said.