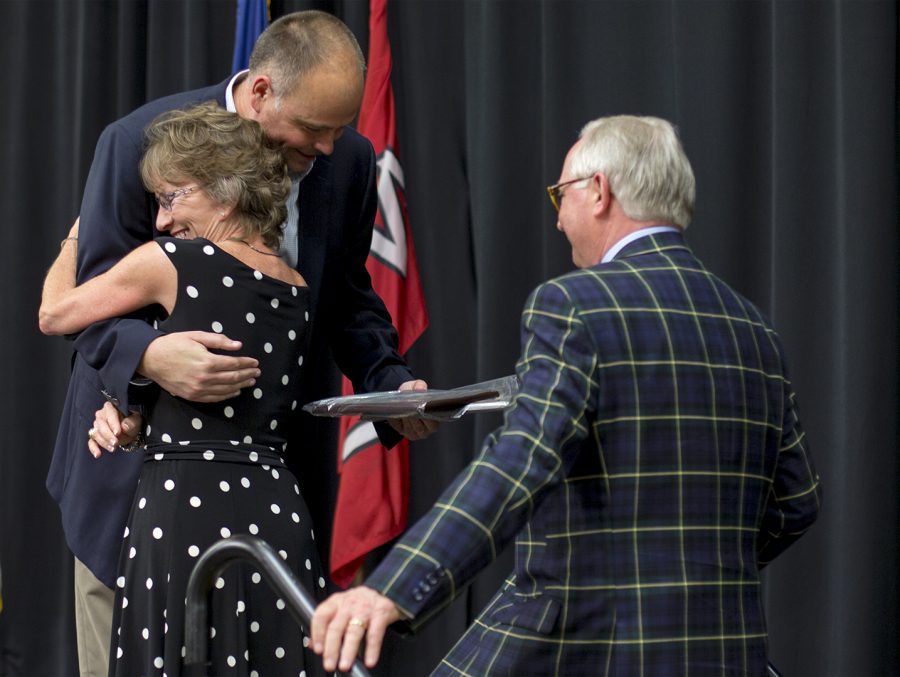 WKU professor and former chair of Warren County Scott Lasley presents the Volunteer of the Year award to Tom and Sandy Boussard during the Lincoln dinner held at the Knicely Center on Saturday. The dinner is held annually and is one of the Republican party of Bowling Green's biggest fundraisers. Speakers included Kentucky representative Brett Guthrie and Kentucky Commissioner of Agriculture Ryan Quarles.

Saturday night, members of the Republican Party of Warren County gathered at the Carroll Knicely Center for the Southern Kentucky Lincoln Day Dinner to celebrate the accomplishments of the party.

New county chair David Graham said the dinner is the largest annual fundraiser and a great opportunity for members of the party to get together. He said it was a way to celebrate and energize the party.

Treasurer of the Republican party of Warren County, Ben Mohon, said he was excited to hear from the speakers to get their thoughts on recent sessions and also to learn how the new presidency will affect local communities.

Hoover said from the November elections for Kentucky house and senate seats, the Republican party became the majority for the first time in 96 years.

Graham said it was an exciting time for the party because they have the possibility of tackling national issues. Already this advantage has been seen through the passing of legislation like pro-life and right to work policies.

In his remarks, Guthrie explained the current state of health care legislation in Washington, D.C. Guthrie serves on the energy and commerce committee and said they are currently going through the largest reform since the 1990s.

Hoover discussed many of the legislative successes, primarily achievements made in business legislation. He celebrated the strides made for right to work and a new business-friendly climate.

From these, Hoover said opportunities are coming for more and more Kentuckians.

Hoover said there is still work to do, and the pension system in Kentucky is still one of the worst-funded in the nation.

Quarles, who also serves on President Donald Trump’s agricultural advisory committee, discussed how Kentucky has begun investing in alternative crops and worked to cut down on criminal activity at gas pumps. Quarles said they had started a conversation on hunger in Kentucky.

“We can do a better job of taking care of our Kentuckians in need,” Quarles said.

The Lincoln Day Dinner also recognized the activism among volunteers and members of the party that helped through elections.

“It’s almost impossible to function as a political party without volunteers,” Lasley said.

Meredith said they act as a welcoming organization that helps people become involved, especially for people who are uncertain of their political affiliation.

Meredith said while she was at WKU, there were not many Republican organizations on campus, but now there is a more solid movement to be involved as students. She explained this is because students have a better understanding that their votes count.

Hoover explained younger people, like students, are becoming more involved to be participants in politics and have an interest in both issues and politics.

Meredith said student volunteers are beneficial to a campaign because the community can recognize and appreciate their efforts. Doing volunteer work on a campaign is also useful because it allows students to network and become marketable.

“You can’t wait to look at the future,” Meredith said to encourage students to make these powerful connections soon.

Guthrie said the event allows him a chance to thank the people who helped with his campaign and to hear what people are thinking about current politics.

Hoover said since the elections, there has been increased excitement in the party.

“Are you proud today to be a Republican in the state of Kentucky?” Hoover asked. From the audience, he received a loud yes and much applause.

All of the speakers played on the theme of party pride and recognized the accomplishments and unity of the Republican party.

Guthrie said a lot of people went into building the party. Quarles said the party has grown in the past year but also has protected the ground gained.

“We changed history, with your help,” Quarles said.

At the end of his remarks, Hoover said they should look at every accomplishment not as what they did for the Republican party or what they stopped the Democratic party from doing.

“The question is and must always be, what did we do for the people of Kentucky?” Hoover said.

With the high profile speakers, there was some attention for the event. Outside the Knicely Center, WKU alumna Michaela Ryan held a sign reading “Where’s my town hall?”

Ryan said her sign was directed at Guthrie, who has now refused to hold a Town Hall like many other members of Congress. Instead, constituents must approach Guthrie in an individual setting which is more difficult.

Ryan said this prevents him from hearing the hard questions he needs to answer.