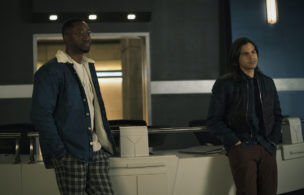 The Flash pulls a Marty McFly tonight with a trip back in time as Chester (Brandon McKnight) and Cisco (Carlos Valdes) get sucked into Chester’s hometown of Masonville, circa 1998. Space Jam, Blockbuster Video, Urkel jokes…it’s “freakin’ awesome,” as Cisco puts it, until they realize that finding the tech they need to get back home isn’t so easy to find at the end of the 20th Century.

But for as lighthearted as “The One with the Nineties” is at the outset, there is a deeply emotional center to the hour and it all has to do with Chester’s past. Since joining Team Flash, McKnight’s Vibe-uccino drinking Chester P. Runk has been a hoot, and now, we get to find out more about the character, and as the actor puts it in our recent chat, “why he is the way he is.”

I just finished screening the ’90s episode and what a great episode for you!

Brandon McKnight: Thank you. Thank you!

When did they tell you that they were going to get into Chester’s backstory?

It wasn’t until the beginning of this season when I had a conversation with Eric [Wallace, showrunner]. Up until this season, we didn’t really have many conversations about Chester’s past and I kinda just had my own backstory created in my head to play him. But then we got into the nitty really when he sent me this episode…and that was early on. Usually, we’ll get an episode maybe about a month before and I think we were shooting, like, the second episode when I got this episode. See AlsoJordan Fisher Brings Impulsive DC Character to ‘The Flash’
The multi-hyphenate Fisher (‘To All the Boys: P.S. I Still Love You’) brings the D.C. character to the small screen.

That’s one upside of production shutdowns.

[Laughs] Yeah, right? And so we started talking just about where he comes from and why he is the way he is and why he is able to do the things that he does. Where does all of who Chester is come from? I think that’s when we really started to build on who he is. I remember after reading this episode, just thanking Eric for writing the story in the way that he wrote it, especially with Chester’s relationship with the people in his past. Now, are you even old enough to remember the ’90s?

So you remember Blockbuster Video?

Oh, I remember Blockbuster Video! Every Friday, it was like a celebration for me. And this is where my love for movies came from, too. From Blockbuster, every Friday. I would save up whatever little allowance my mom would give me and I would go to Blockbuster up the street with my little sister and we would rent three movies. One for Friday night, Saturday night, and Sunday night. And we’d buy like Pull-n-Peel Twizzlers and Sour Patch Kids…

At the front desk!

Yes! And I used to rent some of the video games, too. That was when I started playing video games.

Speaking of, I heard some of you on The Flash are all playing Mario Kart against each other?

Yes, we are! We have our Mario Kart nights, yeah. [Laughs]

Grant Gustin told me that you and Kayla Compton’s husband are really great at it.

[Laughs] It’s so funny. I love hosting things, I just love having people over and throwing game nights and stuff like that. So me and my friends from back home, we would always do that. So I thought, you know, because of COVID, maybe let’s try this. Everybody has a Nintendo Switch and everybody has Mario Kart, so let’s just do that. It started with Kayla and her husband Josiah. They hadn’t played before but they got a Switch I think, around Christmas and I was like, ‘You’ve got to get Mario Kart…once you get it, we’ll play and it’ll be great.” Then I decided, you know what, let’s bring everybody in because everybody has a Switch. So then we did a Zoom session where it’s like a Mario Kart party and for whatever reason, Josiah went from being like a complete newb at the game to being like main competition, world-class Mario Kart driver…I don’t even know how he did it! Like he just got really good, really fast.

And how about Carlos? Because on screen, the two of you guys play so great together. Does he get into the Mario Kart competition as well?

When we did our first one, he was there and Carlos was sneakily good. It was one of those things where he warmed up, I guess the first two races, he was like fourth or sixth place, and then all of a sudden, I’m driving along, and he just kind of came out of nowhere.[Laughs] How great is it that they have paired you two together so much?

This entire episode and what it is, just the relationship between Chester and Cisco, I saw as a huge gift. And shooting this episode with Carlos, I keep saying this, but he’s such a generous actor and he’s so smart. He just gets story and gets character and he’s very much an artist. So getting to work with him and go through this entire episode with him…it was more than a gift. It was a privilege.

He’s a big fan of improvisation and finding things in the scene and making changes here and there, which I also love. I love organic work where it’s like, ‘Oh, I just discovered this thing.’ And then the director of the episode, Jeff Byrd, was such a great facilitator of that. There were so many moments throughout the entire episode that were improvised and I gotta give it up to Carlos for really being open to everything that I gave him, but then also really giving me the time to figure things out. And it’s just a great, great working relationship.

Nice. And I appreciate that Chester and Cisco are so smart that it doesn’t take them long to figure out why they are stuck back in the ’90s.

[Laughs] We talked about that on set, too! Like, how mindful they are in making sure they don’t mess anything up and or making do anything that will impact the timeline too much. Chester says at one point “Don’t let one moment from your past define the rest of your future.”Do you have a moment in your past that defined your future?

Oh…I feel like I have a lot of moments in my past. I’ll tell the most recent one, this happened maybe a few years ago. I used to work as a mechanic and I was the youngest licensed tech in the shop. One of the guys who’d been working there for maybe like 15-20 years. I had gotten this job and been working there for like three years now…this is pretty much probably what I’m going to do for the rest of my life, probably. But there was something about that, that wasn’t sitting right with me. And this one dude, Jason Saunders, came up to me and he was like, “Listen, I see there’s something different about you versus everybody else is working here. You’re not supposed to be here. You have been talking about this whole acting thing.”

Mind you, at this time I wasn’t an [professional] actor at all. I just liked doing it, but I didn’t know anything, I didn’t have an agent and never auditioned for anything. But Jason was like, “You always talk about doing this acting thing and you’re always doing these funny little things with us here at work. You need need to get out of the shop and you need to figure that out. I want to see you go out and do the thing that you actually enjoy doing. You gotta follow that shine you have.”

It was just a passing conversation but I think that really sparked it for me because I woke up not too long after that and was like, “You know what, I’m going to try this. I’m going to be an actor. I’m going to do that thing.” It took a very long time for things to actually like take root but I don’t know what life would look like if that didn’t happen.  I’m realizing it more now than I did at the time. I think that that was a very big push and he’s still a good friend of mine to this day.

That is awesome. Now, without spoiling how the episode ends, there is a tease that Chester gets his hands on something that could really change his. Do you know what’s up with that?

I know that what it is, is going to be very impactful and it’s going to change the game for the entire team. And it’s definitely going to…that’s as much as I’m going to say about it. [Laughs]