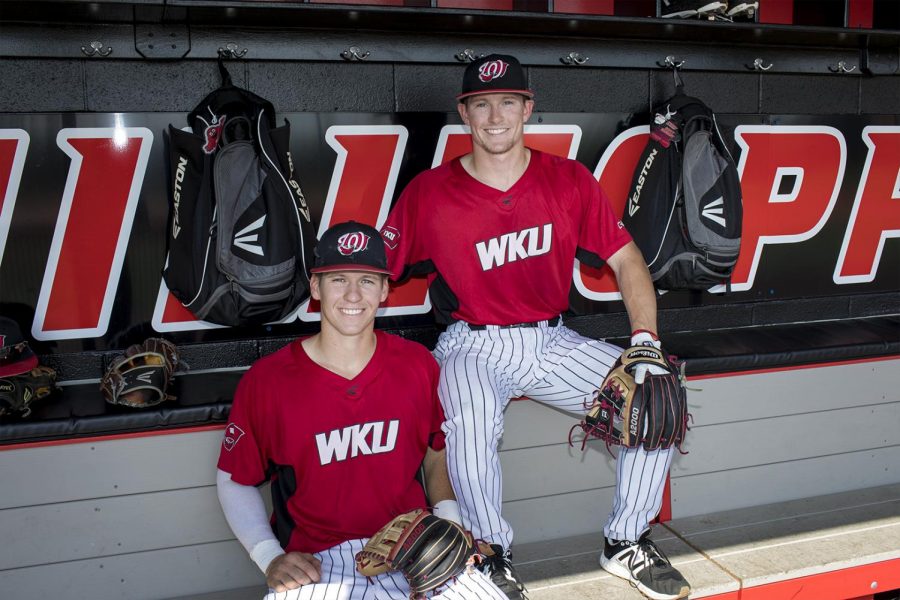 "its everyones' dream to play with their brother" Marshall said. Brothers Bryson and Marshall Smith joined the Hilltopper this season. Marshall said the decision to come to WKU was easy because his brother had committed to play here and he loved the coaching style of John Pawlowski. Marshall spent a season at San Diego State, and at Brunswick Community College before coming to the Hill.

To those who have played it, the game of baseball is often much more than America’s pastime. To some, it’s a brotherhood. To some, it’s even a way of life. To WKU’s Smith family, it’s both of those things and more.

Bryson and Marshall Smith are brothers and teammates in their first year on the WKU baseball team. They’re both hitting .250 or better this year, and they’re not the only talented players in their family. Their dad, Bryan Smith, played at Campbell University from 1978-79 before transferring to Clemson University and playing there from 1980-82, where he hit .296 his senior year.

The baseball family tree extends even further back, as Bryson and Marshall’s grandfather played baseball in college, and their brother played as a child.

“It’s been good for all of us. It is a family thing, especially with these two at the same school,” Bryan Smith said. “This kind of allows us to get back together, so it’s kind of neat, and it’s fun to see them when they get on the field at the same time. It’s good structure for those guys, for my guys, for the future, and that’s what I think this is all about.”

According to Bryan, baseball is just like life and that’s what makes it so great.

“You’re going to have ups and downs every single day,” Bryan Smith said. “Good years, bad years, and you’ve got to find how to live on an even keel, and just handle all of that on a daily basis. That’s one reason I love baseball. All walks of life in baseball, just like in the real world, so it’s good.”

But despite the fact that the Smith patriarch loves baseball for its similarities to the real world, and the fact that he played at a high level all the way through college, he didn’t expect his kids to play it. But when they focused on baseball, he was always there for them.

“He let us play different sports, and we came to find out baseball was just the right fit for both of us,” Marshall Smith said. “He’s there for us whenever we need him to talk different approaches with baseball, and life. So, he’s been a big influence on my life, and I’m sure Bryson’s as well.”

Even though he wasn’t pushing them, he was still coaching them. Bryan Smith was the little league coach for his kids and also coached them in summer leagues. Once that official coaching ended, Bryan still found himself using his expertise to help his kids.

“I love just kind of interjecting,” Bryan Smith said. “I trust the coaches whether I should or not. Most cases I should; I trust them in knowing the game and helping them out and coaching them. But when I would get home, I would kind of interject, ‘Well I thought you could have done this or you could have done that,’ or ‘Good job here.’ I don’t think I ever beat them up, ever, when they made a mistake.”

His sons confirmed that he was always there to give suggestions when they were needed, even calling on his past experiences as a ballplayer to help.

“He always jokes around with the past that he’s had with his coaches and how he was as a player, and relates that to different things that we do,” Marshall Smith said. “Maybe it’s mechanically, or at the plate, or in the field, so he’s been a big help there.”

In their family baseball experience, it hasn’t been that often that the Smith brothers played on the same team. Due to age differences and the fact that they went to different schools, it’s been a rare occurrence for them to be on the same side.

“One year we got on the same team in little league,” Bryson Smith said. “Our ages just barely matched up, so we’d be on the same team. And then we had one or two summers when I was 15 or 16 that we got to play together as well for travel ball.”

There was a bit of a debate as to what the final score was.

“I (won). We won 12-1 or something,” Marshall said before his brother cut him off with laughter.

“No,” Bryson said. “He has a bad memory. It was a close game, and I think I had more hits than him too.”

Their dad helped settle the debate, to a degree.

“I would tend to think Bryson has a better memory with that kind of stuff,” Bryan Smith said, as he laughed. “But you know I don’t really know. I do remember Bryson had a good little game. I’m thinking Marshall’s team may have won. I don’t think it was a blowout, but Marshall’s team won. It’s funny how they remember that stuff.”

Prior to becoming teammates at WKU, Marshall went to San Diego State before transferring to Brunswick Community College, where he had a .314 batting average and posted a 4.0 GPA.

After that stop at Brunswick, he finally found his home at WKU as a redshirt sophomore this season. Oddly enough, it was the younger brother, Bryson, who pushed him in this direction.

“It’s actually kind of funny, I chose to go here first, and Marshall transferred from junior college,” Bryson, a true freshman on the team, said. “I think after I told him how much I loved it here when I went on my visit, I think he decided that he might want come join me here too.”

Now reunited on the same team, the two have gotten to share a special bond, even playing together in the middle infield and turning double-plays.

“We got to turn one right over there,” Bryson said, pointing at second base on Nick Denes Field. “It was a pretty neat experience, to be able to do that at the collegiate level with your brother.”

With their college careers, the Smith brothers have carried on what is becoming a longstanding tradition of baseball success in the family. Their father is proud of them, but he’s proud because they’re working hard.

“Whether they do good or bad on the field, I care because I know they care, but I think that’s probably the proudest thing for me, is knowing that they know how to do it the right way,” Bryan Smith said. “They strive to be the best they can be in whatever they’re doing.”