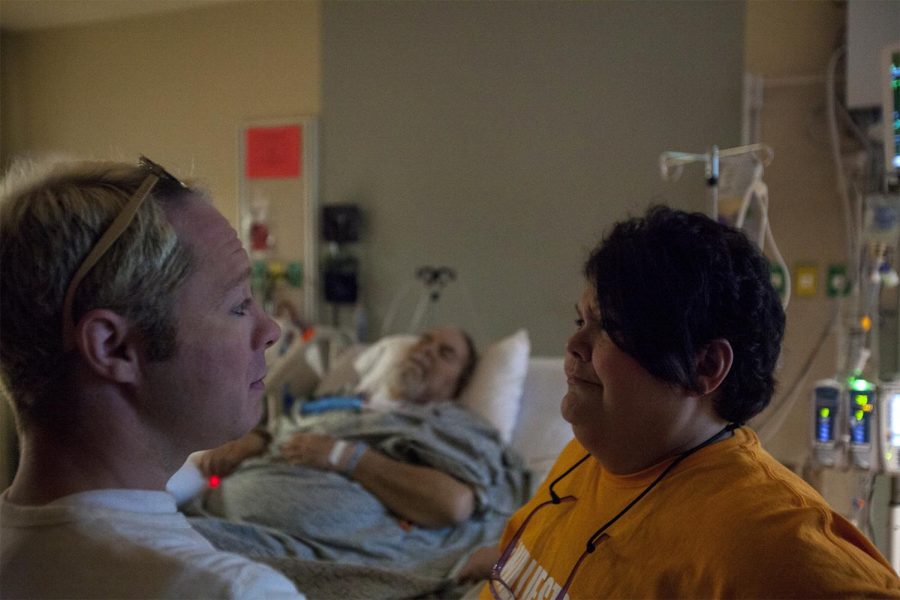 Lee Cox visits his friends, Charita Moyers and her husband, Willie, to offer support after Willie suffered a brain injury and was hospitalized on March 24, 2017. Charita has not left his side since. "Charita and Willie Moyers are two of the sweetest, most compassionate people I have ever met," Cox said. " I hope Willie pulls through and comes back stronger than." Cox and Jessica Vincent have raised almost $5,000 through a goFundMe page for the Moyers, who, combined, have worked on WKU's campus for 30 years.

Willie Moyers, a maintenance technician for the WKU Restaurant Group, was at work in late March when he started having a headache that led to a brain aneurysm, a stroke and other health issues.

Willie is currently at TriStar Skyline Medical Center in Nashville receiving medical attention. He has been there for about a month. Two co-workers in the WKU Restaurant Group, Jessica Vincent and Lee Cox, started a GoFundMe page titled “Moyers medical expenses” to help with Willie’s medical payments.

“I was very humbled by it, and I got very emotional just for the kindness aspect of it,” Charita said. “I never would have thought anyone would do such a nice thing for my husband and I, and it was just a very nice gesture.”

November will mark the Moyers’ 35th year of marriage.

Charita has been by Willie’s side through all the struggles he has been experiencing.

“He’s just a major fighter, because for what he’s been through, he’s still hanging in there,” Charita said. “He’s a true fighter by all means.”

Cox said he hopes the GoFundMe page will help lift a bit of burden off the Moyers’ shoulders.

“I hope it accomplishes some burden lifted off these two individuals who have put their heart and soul into Western’s campus for 30 years consecutively, and I hope that the medical bills are at least not as much as they thought they were going to be,” he said.

In addition to the GoFundMe page, Charita said one of her bosses started selling t-shirts with the hashtag #williestrong printed on them. Some of WKU’s employees are wearing them to show their support. The money from t-shirt sales will go toward the Moyers’ medical expenses.

According to a Bowling Green Daily News article by Jackson French, Cox is also trying to organize a silent auction to support Willie and Charita. According to the article, the day and location are currently undecided.

People can donate money to help with the Moyers’ medical expenses by donating directly on the GoFundMe page or by going to any BB&T Bank in town and asking to deposit money directly into Charita Moyers’ bank account.

Charita is thankful for all of the support she and Willie have received thus far, and she said she wants to thank “anybody, for anything that they have done throughout this.”