5 things to watch for in the Red White Game 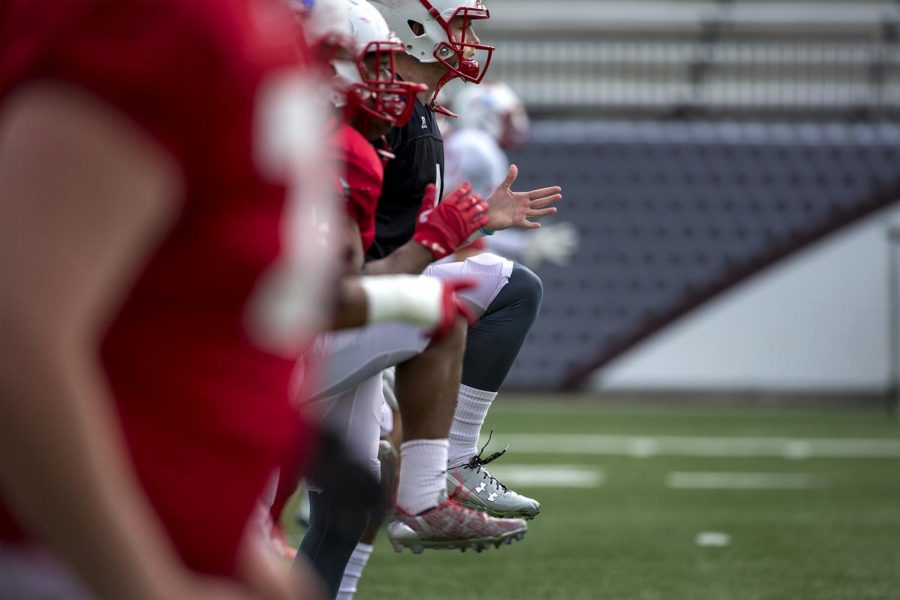 WKU football players do high-knee drills before going through their plays during practice on Tuesday at L.T. Smith Stadium.

WKU’s annual spring football game will kickoff at 3 p.m. Saturday at Houchens-Smith Stadium. Admission and parking are both free while there will be a postgame autograph session with the Hilltopper coaching staff and players. Here are the top storylines to keep an eye on in the game.

Not only will the Hilltoppers get to play in front of what should be a nice crowd for the first time in 2017, but it will also be Mike Sanford’s inaugural game as WKU’s head coach, technically speaking.

Fans and media have been able to catch of a glimpse of how Sanford coaches throughout the course of spring practice leading up to Saturday, but it’ll be interesting to see how he directs his Topper club in a game setting. While Sanford is known for being an offensive guru himself, it will be interesting to see how his style compares to former head coach Jeff Brohm’s creativity on the offensive side of the ball.

The running back depth chart

It’s no secret that all eyes will be focused on the running back position in Saturday’s spring finale. Out of WKU’s four main running backs, two are making comebacks from injuries.

Redshirt-senior Leon Allen, who suffered a gruesome leg injury in a Sept. 10, 2015 game against Louisiana Tech, has showed great progress and has participated some throughout spring practice before it was announced at the end of last week that he would not participate in any more spring activities.

Along with Allen, rising redshirt-junior D’Andre Ferby suffered a season-ending shoulder injury in WKU’s season opener on Sept. 25, 2016 and has also participated in spring practice.

With that duo, rising sophomore Quinton Baker (542 yards, 4 touchdowns) and rising redshirt-sophomore Marquez Trigg (298 yards, 2 touchdowns) are two backs that stepped up and produced when needed last season. And most importantly for WKU, both are fully healthy.

3) Defensive side of the ball

Despite losing Branden Leston, TJ McCollum and Omarius Bryant, the Hilltoppers return 14 defensive starters, giving them a strong foundation on that side of the ball.

Of those returners are Derik Overstreet, Marcus Ward, Joe Brown, Joel Iyiegbuniwe, DeAndre Simmons, Tanner Reeves and Ben Holt – all of whom played important roles a season ago.

Ward, a fifth-year senior, suffered a season-ending knee injury at Alabama in week two of the 2016 season and received a medical redshirt for 2016. The defensive back is one of the Hilltoppers’ main leaders and a team captain.

WKU’s wide receiver position is another area that will also be tightly contested. With standout wide receivers Nicholas Norris and Taywan Taylor both gone from the program, Sanford and his staff turn to their rising talent to replace the record-breaking duo.

It is unclear if Fant will play in Saturday’s game after rehabbing a knee injury suffered at the tail end of the 2016 season.

5) Mike White back under center

After a successful debut season as WKU’s starting quarterback, redshirt senior to be Mike White returns as the Hilltoppers’ pilot for one final year.

Behind White is redshirt-junior Drew Eckels and redshirt-freshman Steven Duncan.