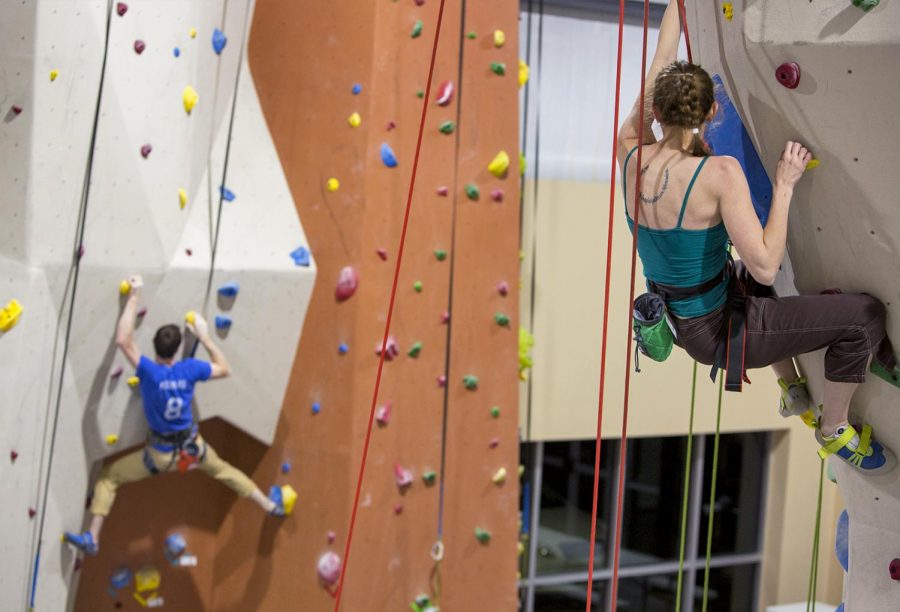 Laura DeLancey, of Oregon, climbs her way to the top while Yvonne Petkus, of New Jersey, provides rope support. The two work in different departments at WKU and have been coming to Vertical Excape for about two to three times a week. "It's both physical and mental exercise," DeLancey said.

After a week of sitting at a desk, many college students and young adults spend Friday evening with a harness strapped to their waist and their hands covered in chalk powder.

Vertical Excape is the first, and currently the only, rock climbing gym in Bowling Green. Since the gym’s opening back in early February, it has unified a scattered community of rock climbers in the city.

Evan Karcher, a manager at Vertical Excape, said the gym had provided rock climbers a place to meet other climbers who they didn’t know existed.

“It’s a hidden community that no one actually knew existed until we opened up, and now all these people are coming in, and they’re finally realizing, like, ‘oh hey, we’re not the only rock climbers in Bowling Green,’” Karcher said.

Rock climbing is a social activity, as Karcher described it, and the social aspect shows at Vertical Excape. Friendly conversation fills the room. Climbers huddle around a fellow climber while shouting tips and encouragement.

Bowling Green freshman Reed Mattison is a member of the gym who has been actively climbing for two years. He said he didn’t realize how many climbers there were in Bowling Green until the gym opened.

“There are a lot more out there than I thought, and with this gym everybody is coming out of the woodwork for sure,” Mattison said. “There’s some super experienced climbers who have been doing it for a long time that I had no idea existed until we all started talking about the gym.”

Bowling Green was an inconvenient place for climbers until the gym opened. Mattison said no workout facilities offer rock climbing and the only other places to climb are 45 minutes to an hour away from the town.

“None of the actual workout gyms have a climbing wall, or they don’t have hang boards,” Mattison said. “I think having this gym gets those weekend warriors into a workout routine during the week.”

The gym has given climbers an opportunity to stay seasoned and active as well as a way to network with each other.

Experienced climbers aren’t the only ones who benefit from the gym. Vertical Excape has attracted newcomers to the climbing community.

Hope Leeper, 16, a junior attending Greenwood High School, started rock climbing a couple of months ago when her friends invited her to go. She said the activity offers something different.

“It’s difficult, but once you get used to it it’s really fun,” Leeper said. “It’s not like your everyday activity.”

Grace Alexieff, 16, a junior at Bowling Green High School, started rock climbing recently as well. She said she noticed how friendly the environment is the first time she went.

“It seemed like a really cool place where everyone knows everyone,” Alexieff said.

Whether someone goes climbing as a beginner who does it in their spare time or as a more experienced climber who wants to improve their skill, Vertical Excape is contributing to a growing community of rock climbers in Bowling Green.