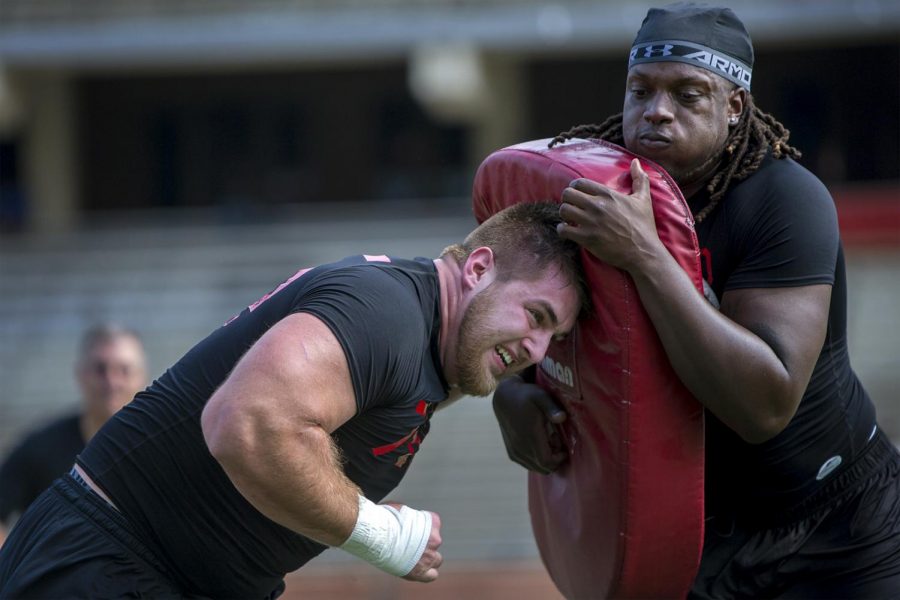 With all but six NFL teams represented, 21 former Hilltopper football players worked out in front of professional scouts and coaches on Monday in WKU’s annual Pro Day.

For one final time, the winningest class in the FBS era at WKU trotted out on Feix Field in L.T. Smith Stadium to perform individually in efforts to launch their professional careers forward.

Halpin acknowledged there was a definite adrenaline rush when he got up on Monday morning, but it wasn’t a familiar one.

“The adrenaline before a game, you’re all pumped up and excited about to go out in front of the crowd, but this is nervous energy, nervous adrenaline,” he said. “It was quiet in the weight room and there were a bunch of scouts standing around you. But it was good. Once I got the bench over with and moved on to the vertical it smoothed out.”

Halpin did more than just “get the bench over with.” The anchor of a dominant offensive line in 2016, Halpin put up 35 repetitions on the bench press which would’ve ranked first at the NFL Combine had he been invited.

While Monday’s Pro Day was an event centered around individual performance, it was apparent that this senior class still acts very much as a team.

“It’s so special we  have a great bond,” Halpin said. “We came in all from different states, didn’t know anything about each other and we’re best friends now. Me and Forrest [Lamp], we’re definitely best friends and me and Darrell [Williams] are great friends. We played together on the O-line since our redshirt freshman year and we’re brothers. It’s great to be out here one last time working together. It was awesome.”

Among the players that worked out on Monday, Lamp drew more professional eyeballs than any other prospect. A consensus first round pick among NFL Draft analysts, the former WKU left tackle said he has had 14 workouts with NFL teams thus far, and has been pushed to play as many positions possible.

A center himself, Halpin was quick to testify to Lamp’s versatility on Monday when prodded.

“We would have times last year where we would have certain plays where I would have to make calls to him,  but we’d be on the same page,” Halpin said. “Sometimes the backers would start to blitz and we’d look at each other and we’d know what to do. So, he’s very smart and he can play guard, tackle and even center if he wants to.”

Lamp was one of the selected players to participate in the NFL Combine earlier this month, and he received another exclusive invitation when he was asked to attend the NFL Draft last week. Lamp said he hasn’t decided yet, but is likely to stay home and watch the draft with family, friends and some former coaches, including former WKU head coach Jeff Brohm.

Taylor also participated in the NFL Combine with Lamp, so the experience wasn’t necessarily new, instead more comfortable.

“It’s way more comfortable, very relaxing,” Taylor said. “I’m with my guys, very good camaraderie, so we all motivate each other and there’s not much tension and we’re not worked up as it is like the combine was. I think it was good for us to be out here back at home in BG. It felt really comfortable.”

Both Lamp and Taylor have been drawing national attention from media and scouts for some time now, and the praise from their former teammates remains extensive and genuine.

“Why wouldn’t you take him in the first round? He’s a great kid, the best guy I know,” Halpin said. “I could call him up 10 years from now asking him to help me out and he’d do it.”

A year after the Hilltoppers’ Pro Day consisted of interesting storylines from names like Brandon Doughty and Tyler Higbee, Monday’s rendition was interesting in its own respect with a lot of different players potentially improving their stocks significantly.

“You’ve got Lamp, Taywan, we all showed out. I know someone will take a chance,” Brown said.

With the Draft almost exactly one month out, there is a lot of work left for the former Hilltoppers, and Monday was just another step.

“At the end of the day it’s what we’ve been doing all of our lives,” Wales said. “We’ve been training for this day for the last three months. I kind of had the jitters, I couldn’t wait for this day to come. This is what we live for.”