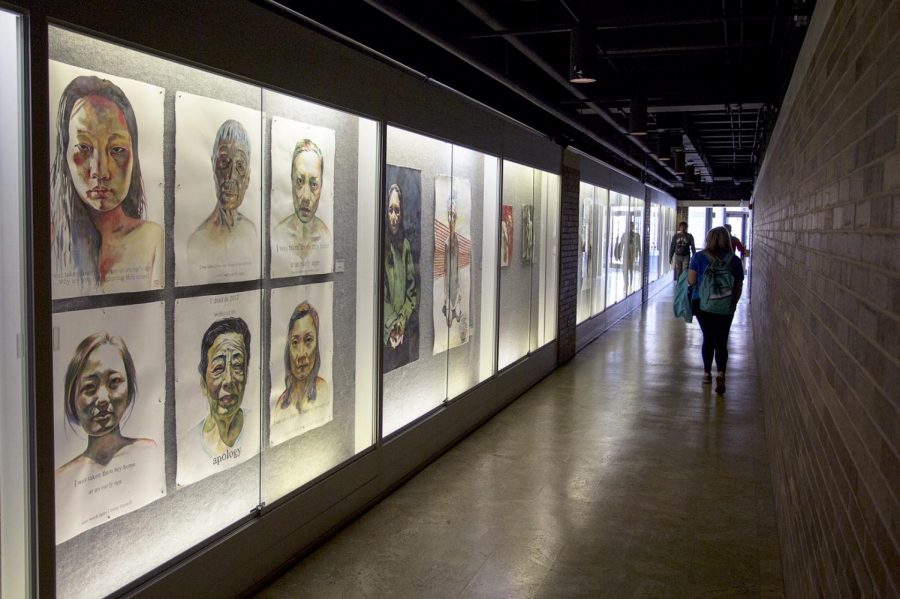 Students walk pass Steve Cavallo's art exhibit in FAC on March 27, 2017. Cavallo focuses on human trafficking and the stigma's attached to the victims in his art.

Steven Cavallo’s exhibit “Breaking the Silence: Where Have You Been, My Daughter?” has been on display in WKU’s FAC Corridor Gallery since Feb. 1 and will be on display until April 5.

Many of the displayed works are part of his “Comfort Women” series, which focuses on the tragedies women face. Many of the women in his work are Korean women who were forced into sexual slavery during World War II. Cavallo explores human rights issues and the individual voices behind the issues. He will speak about his exhibition at WKU at 5:30 p.m. in FAC 156.

Cavallo has also worked with individuals interned at Manzanar Relocation Camp, a Japanese prison camp in Independence, California, and will exhibit there in May. He has worked with World War II veterans and Holocaust survivors and has interviewed, photographed and painted them.

What do you hope to communicate with your artwork?

I was raised in the 1960s’ when there was a large focus on human rights. I listened to a lot of political-themed music such as Bob Dylan and Phil Ochs. This sparked an interest in human rights. There was always something inside me that was drawn to subjects like this. In my work, I hope to tell the story of human suffering that might just disappear in time, but I feel the need to record it in some way. I have more of the need to talk about the stories that aren’t in the history books. What interests me is to paint is the stories that will vanish when a particular generation passes away.

What is your knowledge like on the topic of human rights, women’s rights in particular, that you explore through your work?

The human rights work started with the Japanese Internment Camps set up during World War II in the West. Executive Order 9066 had all people of Japanese ancestry imprisoned in 10 camps in the western states. They lost all they had and not one was ever convicted of a crime. Their only crime was that they were Japanese.

From there I began a series on war, and a neighbor told me that I should include comfort women. It was a new subject to me. I began reading a book called “Silence Broken” by Dai Sil Kim-Gibson. I began this as just a project, but after my first exhibit where I had four or five comfort women paintings, I was invited to Korea to meet the survivors. After we met and I got to know them personally, everything changed.

I spent a week with nine of the survivors and went to a protest in Seoul with them. When I returned to the States, Mayor James Rotundo and I worked on the first memorial dedicated to these women. It is in Palisades Park, New Jersey. Since then, many other memorials around the world have been made and it is very special to me that Mayor Rotundo and I had the opportunity to do the first one.

Since the unveiling in October 2010, several of the women came to Palisades Park to see the memorial and I have spent time with the aged survivors of forced sexual slavery each year since our first meeting in Korea in September 2009. I was also honored to join with the group from Glendale, California, and exhibit there one year prior to their memorial. They are a wonderful group of people and I am still so touched that they included me in this project.

How would you describe your artistic style?

Someone else called it “dramatic realism.” I liked that phrase. I hope it is thought-provoking work, something that calls the viewer in to hear the story of the people I am painting. They are paintings that have often been taken from several models, put together to show an underlying beauty as well as suffering and pain that mankind has heaped upon them.

How do you feel WKU students will benefit from hearing you speak?

I think any artist talk can benefit others in the arts. Whether it is music, film, painting or writing, I hope the students can take something back with them that will encourage them and help them to develop their artistic expression. I hope I can help them to dig deeper inside themselves and make a statement worth telling.