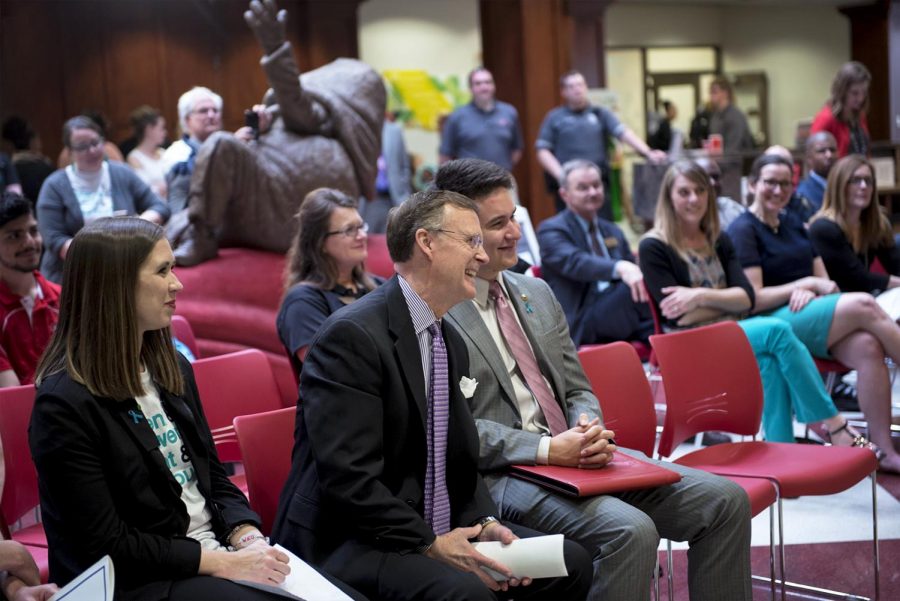 Melanie Evans, coordinator for judicial affairs, Gary Ransdell, and Student Government Association president Jay Todd Richey, listen as attorney general Andy Beshear gives a speech at the sexual assault prevention month event on March 27, 2017 in Downing Student Union. This event was held to kick off the month full of events that raise awareness for sexual assault, and for Ransdell and Beshear to speak out about the prevention of sexual assault and the actions they are taking to help with that.

The event was a way for WKU to kick off a series of various events and activities throughout the month to raise awareness of sexual assault prevention in the community. The events will be coordinated by a planning committee which consists of Hope Harbor Sexual Trauma Recovery Center, WKU Counseling and Testing, WKU Student Wellness, Gender and Women’s Studies, Barren River Area Safe Space, WKU Housing & Residence Life, WKU Student Activities, WKU Public Affairs and WKU Wellness.

“This is what should be the beginning of an amazing career and time of growth for you, let’s make sure that it’s safe for every single student here at WKU,” Beshear said during the event. “It’s the right thing to do; it’s the moral thing to do. Let’s commit to it; let’s get it done.”

The kickoff also included booths where students could be informed about the upcoming Sexual Assault Prevention Month events. Students could spin a wheel that informed them about sexual assault facts and statistics and were given prizes for spinning the wheel. The booths also included free shirts and buttons.

Sexual Assault Prevention Month is a nationally-recognized event started by the National Sexual Violence Resource Center (NSVRC). Though it wasn’t until 2001 that the event was recognized nationally, activists for NSVRS have advocated for using April as a month for sexual assault awareness and prevention since the 1990s.

According to the NSVRC website, this year’s campaign will be focused on “engaging new voices.”

“The focus will be on involving coaches, faith leaders, parents, Greek Life, and bystanders with preventing sexual assault,” the website states. “Many groups know about sexual assault and believe it is a problem, but they don’t know how they can help.”

“We hope that through events that we’ve been doing on campus, that it will bring awareness to what everyone can do,” Milby said. “We can talk about what Hope Harbor services are all day.”

On April 4, WKU will participate in the Walk a Mile in Her Shoes march at the Centennial Mall, in which WKU men will march in red high heels throughout campus to raise awareness of sexual assault in the community. Registration for the event is $25, and all proceeds will go towards Hope Harbor.

On April 20, WKU will take part in Take Back the Night, an internationally-recognized rally and march originally held to empower women who feel afraid to walk at night due to the threat of sexual assault. The event will begin at First Christian Church at 6 p.m. and marching will continue throughout downtown Bowling Green.

The march will be followed by an art and music benefit show at the FFOYA House, featuring music by Nashville-based musician Emma Dilemma and local band Heron and Crane, along with a gallery featuring the works of nine local artists including Victoria Lane, Shai Riney and Chloe Lee. All proceeds of the benefit will Hope Harbor, and information on the organization’s services will be available at the event.

Other events include a Clothesline Display at the Healthy Days event this Wednesday at the Preston Center, a Facebook Live Q & A on April 3, a Poster Making Night at the Warren County Public Library on April 4, a performance of the Vagina Monologues on April 10 at the DSU Auditorium and an Exercise for Empowerment event at Southcentral Kentucky Community & Technical College on April 11.

Milby said the Bowling Green community has been instrumental in furthering the goals of Hope Harbor.

“The Bowling Green community has been really amazing, not only helping with these dine-outs, but donating food for our volunteer training, donating products, having donation drives at their businesses, even just letting us put up a poster about our events,” Milby said. “So, it really is amazing what the community has been able to do.”

Milby said through these events, Hope Harbor wishes to expand awareness of sexual assault resources beyond the month of April.

“Obviously sexual assault doesn’t only happen in April,” Milby said. “So, we are trying to expand our resources. Using volunteers and our advocates can definitely make that happen.”