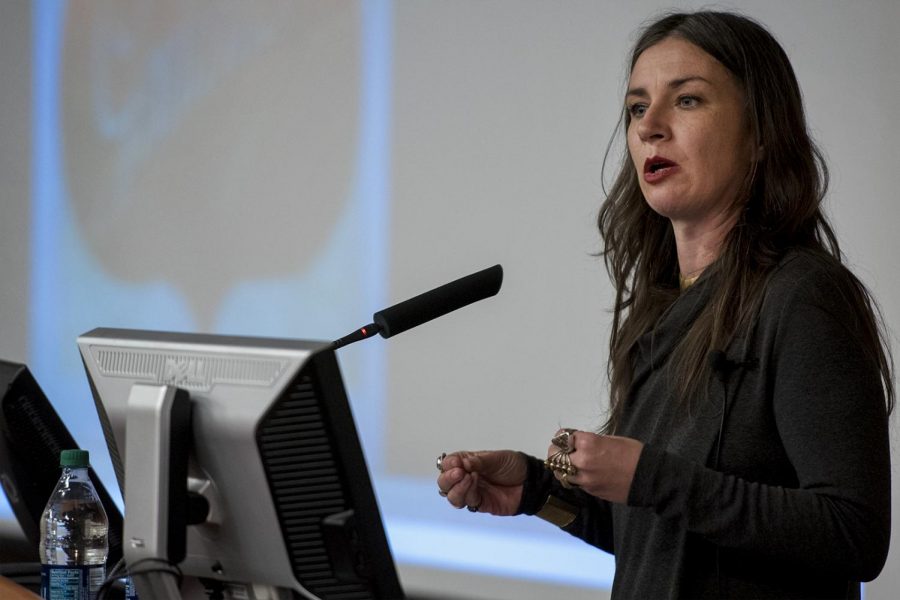 Dr. Jessica Pliley speaks to students in the Gary Ransdell Hall auditorium about sex trafficking in the early twentieth century. Pililey was invited to speak as a part of the Boyd-Lubker visiting scholars program, which is designed to share expertise from a wide range of disciplines with the WKU community.

This year, the featured scholar was Jessica Pliley, associate professor of women’s and gender history at Texas State University, who specializes in the study of sex trafficking in the early twentieth century.

Pliley has an extensive resume as an author, speaker, teacher and scholar. She has spoken at other institutions including Yale and Harvard University and has shared her research in countries like Germany, Switzerland and England.

Sophomore Andi Dahmer introduced Pliley on Tuesday and said she was incredibly inspired by her accomplishments and immense knowledge on the subject.

Pliley’s presentation, “Sex Trafficking and the FBI,” explained the history behind sex trafficking, how the justice and criminal system has handled it and how it has influenced modern issues.

Pliley explained the difficulty of teaching sex trafficking because many people already have concrete perceptions on the issue from dramatic media, like the movie “Taken.” She said this trend was also present in the 1900s, when stories of immorality and sexual trafficking were the most read and films depicting these cases were the most popular.

“Those stories were melodramatic, superficial and largely inaccurate,” Pliley said.

Pliley said her studies involve extremely complicated topics, asking complex questions like “What is women’s consent?” and challenging these preconceived ideas. She recalled how in her classes, students are often challenged on their beliefs and left without concrete answers because of the complexity of the topic.

“I think there is power in being disoriented; that’s where connections are made,” Pliley said.

Pliley emphasized the importance of knowing the subject’s background, focusing a portion of her presentation on the history of sex trafficking.

Freshman Tyler Hardy said she was eager to learn about topics not often covered in classes.

“It was a history lesson that I actually wanted to pay attention to,” she said.

Hardy said she was especially excited to hear statistics that gave her unbiased proof the federal government has and continues to impose laws that control women’s bodies.

This event coincidentally serves as an introduction to sexual assault awareness month in April. Pliley said she is involved and has an understanding of this cause on her own college campus.

Due to the connection between sex trafficking and sexual assault, Pliley said she makes an effort to provide a historical background on rape to her classes.

“We are never going to be able to battle the pervasiveness of sexual assault if we don’t understand the origins,” Pliley said.

She said sexual assault is the primary reason there is a gap in equal access to education, which is why awareness is so important on a college campus.

The Boyd-Lubker Visiting Scholars Program is run by John Lynn Lubker and Bobbie Boyd-Lubker. Each year, a speaker is invited to provide a transdisciplinary perspective to all students in all departments.

Boyd-Lubker explained it is unique from other speaker events because the scholar spends more time on campus. In two days, Pliley had given five presentations and contributed to multiple classes.

Pliley said she has been met with students who are engaged, curious and enthusiastic about the subject.

Boyd-Lubker said she has noticed the appreciation on campus as they attend classes with speakers. She said people have been especially interested in the broad scope of speakers.

“It brings the world to Western,” Boyd-Lubker said.