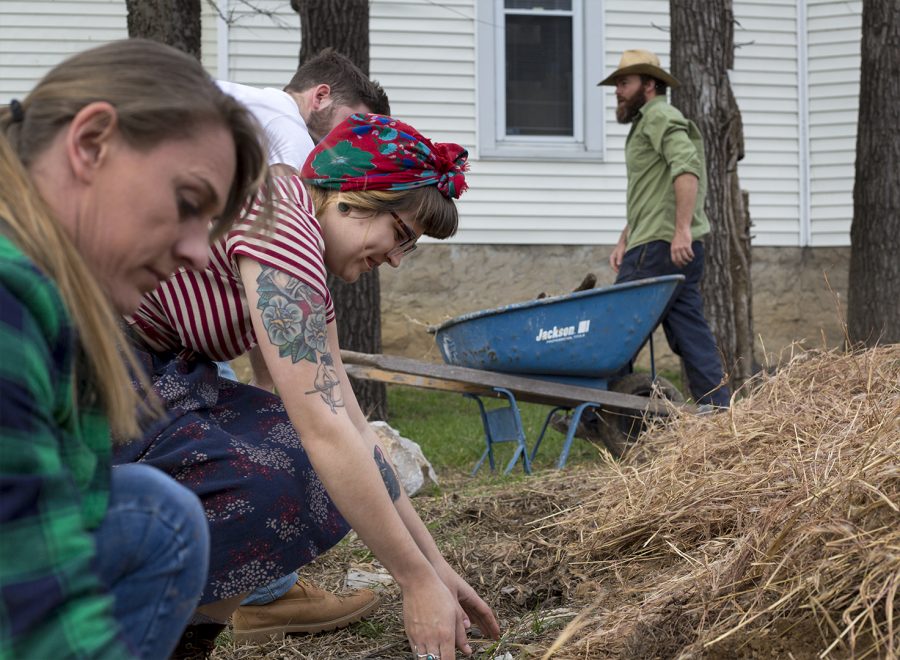 Melissa Whitley, Executive Director at Hope Harbor, and Alayna Milky, the Crisis Intervention Specialist, apply hay to the potato plants at Hope Harvest. “I love the joy the produce and working outdoors has brought to clients of all ages. It has given us a new way to engage with volunteers and the community that I never expected,” said Whitley.

WKU students and Bowling Green community members of all ages gathered with shovels and gloves on Sunday to garden for a greater cause.

Hope Harbor serves five Kentucky counties as a sexual trauma recovery center. Despite being located off a major road, the center has an enclosed community garden for clients. Over the weekend, people gathered to plant potatoes, shallots, raspberries, blackberries and herbs.

Alayna Milby, Hope Harbor crisis intervention specialist, said Hope Harbor is the only center in Bowling Green to provide assistance to sexual assault victims aside from WKU. She said it’s important to have one of these places in the community to not only serve the community but also for an extra layer of confidentiality for any student that may not feel comfortable seeking help on campus.

“People blame themselves, and others blame victims as well, so we provide support to victims of rape,” Milby said.

The Hope Harvest garden was created in June from a grant sponsored through the Barren River Health Department. A fence already separated the lawn from the road, but the enclosed area was previously just grass. Milby said it wasn’t being utilized, so she started “planting the seed” for a community garden with her supervisor.

WKU senior Brendan Bird, a criminology major and intern at Hope Harbor, said the garden is a place for clients to be comfortable, relieve stress and have privacy. The harvest also goes back to clients and their families for free.

Milby remembered a regular client family whose garden was eaten up by bugs. Through Hope Harbor’s garden, the kids were able to participate and take home herbs and vegetables.

The garden is chemical free and uses natural fertilizers. Milby said it provides something to clients that may not have the money or resources for local and natural ingredients.

The form of gardening is unique; the gardeners employ a method called permaculture, which involves growing all the crops together and acts as a natural form of pest control.

The garden is also a hybrid version of Hugelkultur, a gardening method involving raised beds, which Bowling Green resident Timothy Kercheville said is a sustainable, efficient form of gardening.

Kercheville, who created the hybrid method used at Hope Harbor, said the garden never needs to be watered and is a way to grow multiple crops.

Kercheville began working with community gardens in a project called Breaking Ground through the Barren County Detention Center. WKU Glasgow sociology students and female inmates were able to redesign grounds into a garden where the crops could be used by the jail.

From the project, the SOKY community garden grant was created. Kercheville became a mentor to design gardens and train the organizers at different nonprofit groups.

Kercheville described the different projects as a cross-pollination of perspectives.

“If you organize people in small community groups, they learn from each other and share ideas,” he said.

The garden is so productive that it produces a surplus of crops. Whatever Hope Harbor does not need is sometimes given to its neighbors at the White Squirrel Brewery.

In return the restaurant has had fundraisers to raise money and awareness for Hope Harbor. Kercheville said this creates a stronger community in Bowling Green.

Many students came out to show support for the project on Sunday. Junior Taylor Nardon got involved with Hope Harbor last year and she enjoys gardening and working with nonprofits.

Nardon said she likes Hope Harbor’s gardening project because of the sense of community with people who have the same goals and because they can make a difference.

“It says that our generation looks for more purpose-driven things already, and it’s impactful for people to see how the garden turns out and see it as a group project,” Kercheville said.