‘Shameless’: Can Frank Live Without Alcohol? Plus, the Gallaghers Try to Move Forward (RECAP) 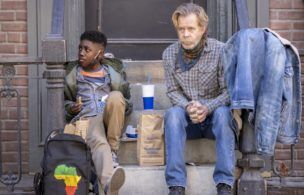 ‘Shameless’: Can Frank Live Without Alcohol? Plus, the Gallaghers Try to Move Forward (RECAP)

[Warning: The below contains MAJOR spoilers for Season 11, Episode 11 of Shameless, “The Fickle Lady Is Calling it Quits.”]

Charting a path to its final farewell, everything’s in motion in “The Fickle Lady Is Calling it Quits”: Lip (Jeremy Allen White) struggles to get things in order to sell the Gallagher house; Carl (Ethan Cutkosky) questions his role as a cop; Debbie (Emma Kenney) wonders if she’ll ever find love; and Ian (Cameron Monaghan) adjusts to life on the West Side with Mickey (Noel Fisher). Plus, youngest Gallagher sibling Liam (Christian Isaiah) tries to get Frank (William H. Macy) back to his old self despite his advancing dementia, and Kev (Steve Howey) and V (Shanola Hampton) prepare for their big move to Louisville with varying feelings. Below, we break down the drama, so beware of major spoilers ahead.

When Lip learns that Kev and V sold their house quickly for a good price to a developer looking to acquire property on the block, he immediately gets in touch with the developer, who sends someone to the house. The woman representative offers Lip $200,000 for the lot, but he’s looking to make more and asks if she’s willing to bump it up to $300,000. They settle at a possible offer of $275,000, and Lip rushes off to tell Tami (Kate Miner) the news.

Tami, however, feels Lip should have taken the initial deal, but he’s so sure of himself that he goes back  home and starts selling off appliances to make even more cash. Then he gets the call: The developer bought one of his neighbor’s houses for the $200,000 price. He tries to persuade them to take the house, but he’s told that it’s just business. He frantically goes back to fixing up the place when Frank breaks Lip’s focus, wondering if he’s searching for a brick of gold they supposedly buried when Lip was 12. Lip runs next door to try and talk with Kev, but no one seems to be home. Things aren’t going well on the West Side. Mickey, for one, can’t sleep with the streets so quiet and distracting moonlight, so he heads outside and returns to the Gallagher house to sleep. The next day he wakes up and returns to Ian at the apartment, pretending he’d been there all night.

Then come the other problems with the building. After Mickey fashions some curtains out of trash bags to fix the moonlight issue and heads out to do laundry, he runs into the building manager, who informs him that only white curtains are allowed to be hung.

As for Ian, he’s having fun. He works out in the building’s gym, enjoys the eye candy, goes for a swim. But his day gets interrupted by Mickey’s next move: He goes to the manager’s office to inquire about when their furniture will arrive, thinking that the furniture in the model apartment comes with the unit. She laughs him off and, in retaliation, he begins taking pool furniture. Ian intercedes and Mickey eventually runs off back to the South Side. At the Gallagher house, Ian tries to level with Mickey and they make some compromises about living on the West Side, including he can pee in the pool. 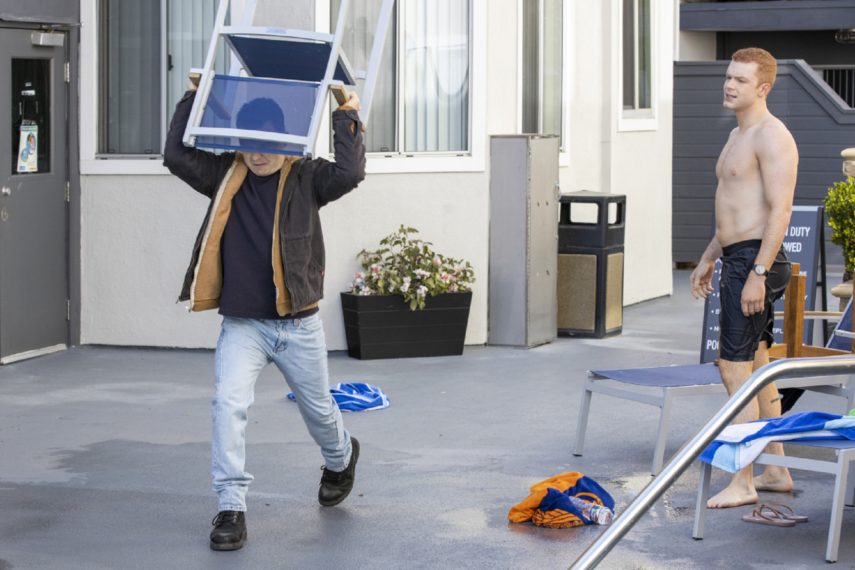 Frank is sinking fast. He wakes up in a soiled bed, but Liam tries his best to make Frank feel like himself, taking his dad out for a day around town. Together they pretend they’re blind and beg for money, scrounging up $120, after which Frank indulges in a romp with a local hooker. Last on their list is drinks at the Alibi, where his good day comes to an end after Debbie punches him because he was a bad role model when it comes to relationships. His advice? Find someone who’s a bigger loser than she is and, with that, sits down to drink a beer.

Unfortunately, Frank gets physically ill from the booze. He questions who he is if he can’t drink and Liam tries his best to reassure Frank there will be good days and bad days. When they get home, Frank puts on a brave face for Liam, but the episode ends with him leaving a note addressed to the Gallaghers and shooting up two needles full of heroin. It looks like a purposeful overdose, but will the Gallagher patriarch really die? Only the finale can say for sure At the station, Carl’s superiors tell him to apologize to the wealthy white landlord he had detained in the last episode. But when the man compares his detainment to the struggles of Black people, Carl has had enough. He decides he’s doing what he thinks is right, job be damned, and he rescinds the apology, even knowing he’ll face court proceedings if the landlord pursues charges. Carl’s demoted to Parking Enforcement, working as a meter maid. He makes a bold decision to only ticket the privileged rich violators, letting the less fortunate off with warnings.

Carl’s partner Tipping  (Joshua Malina) checks up on him, even taking part in a brief dance challenge in the middle of the street. (Will it go viral, making things worse? It depends on the bystanders watching and shooting the scene with their phones.) Continuing his duties, Carl goes to ticket one car and discovers that Tish (Chelsea Alden) is borrowing the vehicle from her boss because she’s pregnant and needs extra room behind the wheel. Carl questions if the baby is his, considering they had unprotected sex earlier this season, but she just drives away without answering. At the Alibi, where they’re feeling especially nostalgic, Kev and V have mixed feelings about their upcoming move to Kentucky. Barflies Tommy (Michael Patrick McGill) and Kermit (Jim Hoffmaster) will miss the couple the most. After leaving to try out new spots, they return and plead with the duo to stay, telling them it just isn’t the same.

Kev, who’s more emotional about leaving, wants to tell the twins the news gently, but V beats him to the punch. Will V’s stiff exterior crack or are they really bidding the South Side farewell? Prior to the scene in the Alibi where she punches her father, Debbie had decided to ask the people in her life why she can’t find a relationship that works. V tells Debbie she needs to love herself first, but unsatisfied with that advice, Debbie turns next to Tami at the salon. She bluntly tells Debbie she’s never had a positive example to base her relationships on. It’s hard to deny that Frank and mom Monica (Chloe Webb) were poor role models, and so Debbie goes to the Alibi to confront Frank. But wouldn’t you know it, his advice is the advice that she takes. “Fate” steps in when she meets Heidi (Shakira Berrera), a newly released criminal who jacks cars, tied up her own mother, and steals money for fun. Their “meet cute” happens when Heidi, trying to blend into the landscape while escaping the authorities (for stealing a car), runs up to Debbie and hugs her at gunpoint. Debbie, naturally, takes this encounter as a sign to learn more about her. The pair end up getting closer as the episode nears its end, and let’s just say we don’t expect another healthy relationship for Debbie.