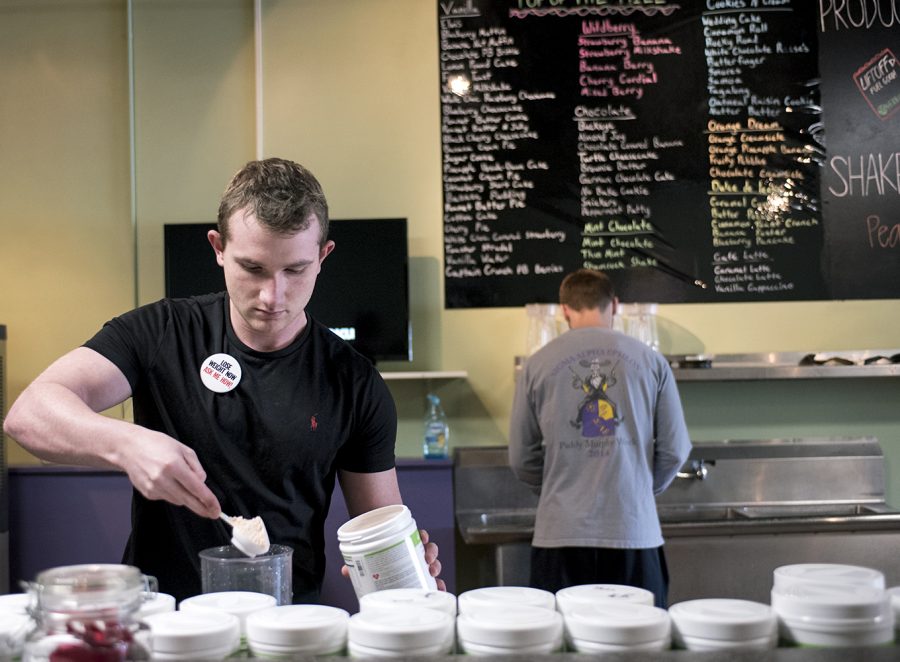 Austin Sutcliffe prepares a banana berry shake at Top of the Hill Nutrition on March 20.The business has been open for two weeks and serves a variety of low calorie meal replacement shakes.

On its opening day, March 6, Top of the Hill Nutrition sold about 115 meal replacement shakes to customers eager to try the product.

It is owned and operated by WKU senior Austin Sutcliffe from Frankfort. He and the other workers are Herbalife members/distributors, which allows them to sell Herbalife’s products. Herbalife is a protein and supplement company.

Sutcliffe learned how to work the business in Frankfort for five to six months, where similar shops were open, and he decided to open his own shop in Bowling Green.

“I’ve been fortunate enough through being in Greek life to meet quite a few people, so it was easier to spread the word and let people know, create a bunch of buzz, and then with this social media promotion, people have just seen it from their friends, and they love the shakes, so they highly recommend,” Sutcliffe said.

The social media promotion allows customers to get a shake, aloe shot and herbal tea for $5 if they share pictures and information on social media about Top of the Hill Nutrition.

Sutcliffe started getting into health and fitness around his sophomore year and started incorporating healthy eating habits and Herbalife’s products into his routine.

“Once I started implementing that into working out, I started to see a lot of results for myself, and I wanted to help other people out,” he said. “Then when I found this opportunity in Frankfort, I just thought this was the most convenient and best way for people to reach their fitness goals, so I wanted to have the opportunity to share that with the people of Bowling Green.”

Sutcliffe explained how he came up with the name of his business.

“I thought that ‘Top of the Hill Nutrition’ was a great way to resonate with students. I’ve noticed from my four years of being here how much it means to be a Hilltopper, so I wanted to find a way to be able to reach the whole Bowling Green community while still letting people know that we care about health and fitness,” Sutcliffe said.

Rhett Hughes is from Bath County and went to school in Morehead. Sutcliffe introduced Hughes to Herbalife’s products last semester and started ordering products from him before they set up the business. Hughes has lost about 20 pounds since he started drinking the shakes, and he loves them.

Hughes thinks the shop will bring a healthier lifestyle to Bowling Green.

Hughes described the aloe shot as a “great accent” for the shakes. The shakes are thick, so the aloe shots are meant to help the body digest the shake. He said the herbal tea gives an energy boost and kick starts the metabolism.

“You put those together with the shake, and it’s a great product,” Hughes said.

Frost said he was skeptical about Herbalife’s products until Sutcliffe got involved.

He believes the meal replacement shakes will be a healthy option.

“I encourage them mainly because they have a lot of vitamins and minerals that people don’t get through an ordinary diet, in particular, college kids more than anybody,” Frost said.