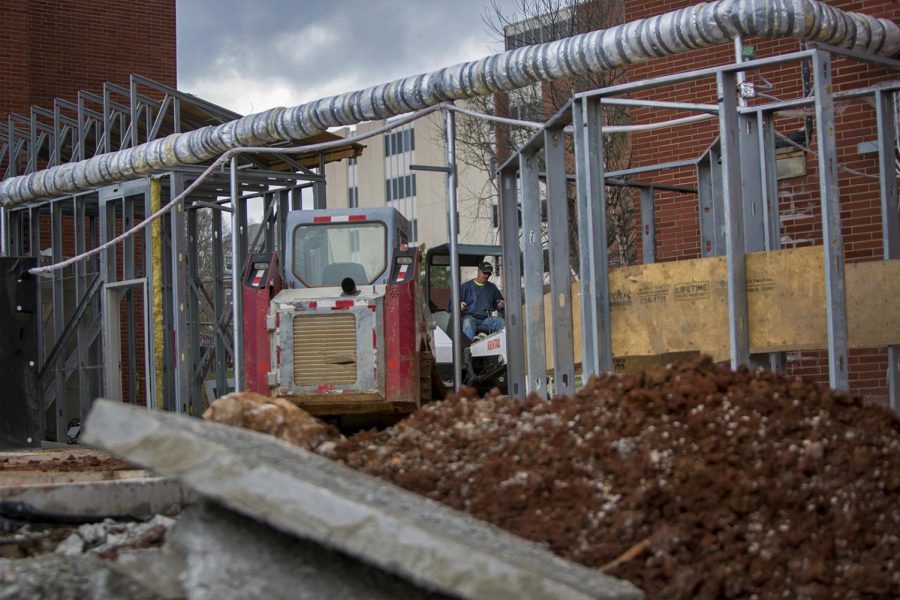 Complete Construction of Kentucky employee, Danny Taylor, 64, works at Northeast Hall on March 27, 2017. Taylor said he has been working at the site on and off for a few weeks.

Last December, construction began on both Southwest and Northeast Hall for international students and honors students residencies. The lobbies in both residence halls were torn down, and the construction has since been underway.

Brian Kuster, executive director of the Student Life Foundation,  said the plan was  to make the residence halls more commercial by creating three levels. He said a goal of the remodel of the lobbies is to make students more interactive.

“There will be more space in the buildings … more space for interaction between students,” Kuster said.

There are also plans for mass kitchens to be built in the dorms. Kuster said he anticipates the larger kitchens increasing the amount of students who cook in the residence halls. There will also be times for chefs to come in and teach a class or two, creating a program in the hall to help students learn how to cook on campus.

“We really envision students interacting more and cooking together in these kitchens,” Kuster said. “There will be tables where people can eat and have group studying.”

The remodel in the residence halls will make it more accessible to students. Students were at first unable to get to the lobby without taking the stairs to the first floor to a small area.

Kuster said the first floor will be more accessible by connecting the west and south halls, allowing students to walk straight to the building on the other side. The second and third floors will consist of a kitchen, study rooms, and a theater for students to hang out in. He said that the study rooms will resemble the glass private study rooms in Downing Student Union.

“We needed to make more options for students,” Kuster said.

While some students may assume WKU will raise the rates on these residence halls. Kuster said there will be no extra increase other than the two percent increase already in place every year.

“The project will be funded by the Student Life Foundation,” he said. “All students who live on campus pay a certain cost each year, and that won’t change.”

Other students said the project is just what the residence halls needed.

“I’m excited to see what the lobby will look like after the construction is done,” junior desk clerk Chelsea Denhard said. “Hopefully, it will be nice and the residents can finally enjoy their stay.”

Kuster said the first-floor lobbies should be done by August 2017 and other floors will follow in September.