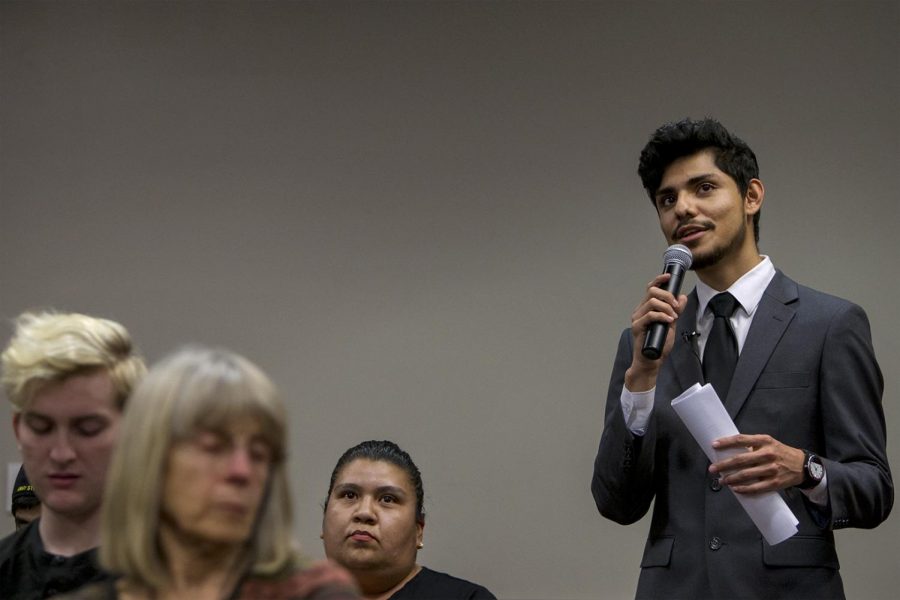 Francisco Serrano translates Laura Torras question from Spanish to English for the panel of lawyers on Feb. 28, 2017 in DSU. Torras questions was about how she should act if immigration officers come to her house.

Bowling Green sophomore Francisco Serrano organized, moderated and translated the event into Spanish. A panel of six attorneys answered questions that had been submitted to Serrano and also took questions from the audience.

The forum opened up with a pre-submitted question about what would happen to children if their parents were taken into custody by Immigration and Customs Enforcement agents. Funke, Judy Schwank and Ryan Schwank all offered opinions in response to the question.

She said her office provides a temporary guardianship document that illegal and undocumented immigrants can fill out that will transfer guardianship of their children to someone else in the case that they are detained.

Ryan Schwank said when people are detained by ICE, they will often be charged with a different crime, such as marijuana possession.

“It’s never a good idea to try to deal with this on your own,” Ryan Schwank said, later adding that immigration is an “extremely complex area of the law.”

Other questions, both pre-submitted and from the audience, asked the lawyers what immigrants should do if law enforcement shows up at their house. Judy Schwank advised making sure they have a warrant and the warrant is for someone who is currently in the house.

Judy Schwank said although she has not had issues with local ICE officers, she recommends to her clients who are here undocumented “that they put three chain locks on their door,” in order to protect themselves in case officers try to enter their homes illegally.

Funke emphasized the importance of being honest if approached by an ICE officer.

“What you should never do is lie,” Funke said.

Funke continued by saying that if asked for your name, the person should give it, but depending on the situation, may not legally be required to reveal more information, such as legal status.

The lawyers also reminded attendees they are protected by the Bill of Rights and due process in the United States.

“Everyone has a due process right,” Bailey said.

Throughout the forum, questions were raised about specific immigrants’ situations. One immigrant, a student from Iran, asked about acquiring a visa in order to stay in the United States after his student visa expires. Another, a woman whose parents are legal residents of the United States and whose brother was protected under Deferred Action for Childhood Arrivals, asked about the easiest way to help her brother become a citizen. With most questions about specific cases, the lawyers agreed that it depends on the situation.

“It depends on the situation,” Ryan Schwank said after one question.

The lawyers also said that they may need more information on specific cases in order to give the best answer.

At the end of the forum, Serrano thanked everyone for coming and the lawyers for their input.

“I just want to leave on the note that we have a support network here for everyone, and they are readily available to help any way they can,” Serrano said.