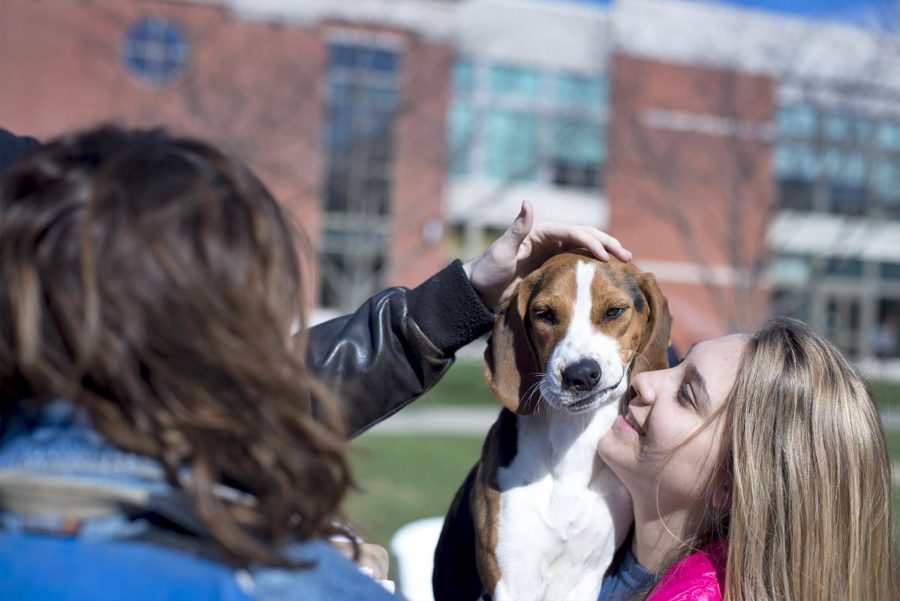 Samantha Tabor holds up a dog from the Humane Society at the "Pass A Smile" campaign on campus, to change the culture of mental and emotional health in America. Students were invited to pet the dogs and sign a pledge to look out for signs that someone is struggling mentally or emotionally.

Students gathered at Minton Lawn on Friday for a chance to play with puppies and raise awareness for mental health at an event hosted by senior public relations majors for their Capstone project.

The event offered students an opportunity to sign a pledge for mental health, take a selfie with a sign reading “pass a smile” and play with dogs up for adoption at the humane society.

For the project, the class partnered with Change Direction, a campaign focused on changing the culture of mental health in America, according to its website.

Kaitlyn Doehring, one of the senior students working on the project, talked about how the group has adopted the five signs of emotional pain of the Change Direction campaign in order to spread awareness to the students at WKU. The five signs include personality change, agitation, withdrawal, poor self-care and hopelessness.

“Any one can suffer from [the five signs], and it’s important to recognize it and reduce the negative stigma around mental health,” Doehring said.

Within the Capstone class, there are four teams completing the project. Doehring’s team is focusing on having fun events for people to increase and improve their own mental health while also educating people on the five signs. The teams differentiate by focusing on different outcomes.

Doehring and her team have adopted the phrase “pass a smile” as their campaign motto and are implementing the pledge so that students can sign,  acknowledging they have learned and understand the five signs. The goal is to get 50 signatures of students and ten of faculty.

Vicki Bagwell, pubic relations associate professor, is in charge of handing the assignment out to the senior Capstone class. Bagwell talks about each team’s perspective and individual goal at the end of it.

“We want students to not only plan,  but implement and gather their success, see how the subject has changed,” Bagwell said.

The teams are entered into the Bateman competition, which is sponsored by Public Relations Student Society of America, where they are given the task to develop their own campaign plan that matches with Change Direction’s viewpoint.

Doehring said students start out the year by developing their campaign plan, which includes events and their end goal.

Alexus Richardson, senior public relations major and member of the team, talks about the importance of the project not just for the people involved but for the students at WKU.

“It’s important to educate students on the signs of suffering if they see someone having these habits or changes of moods, have them find help,” Richardson said.