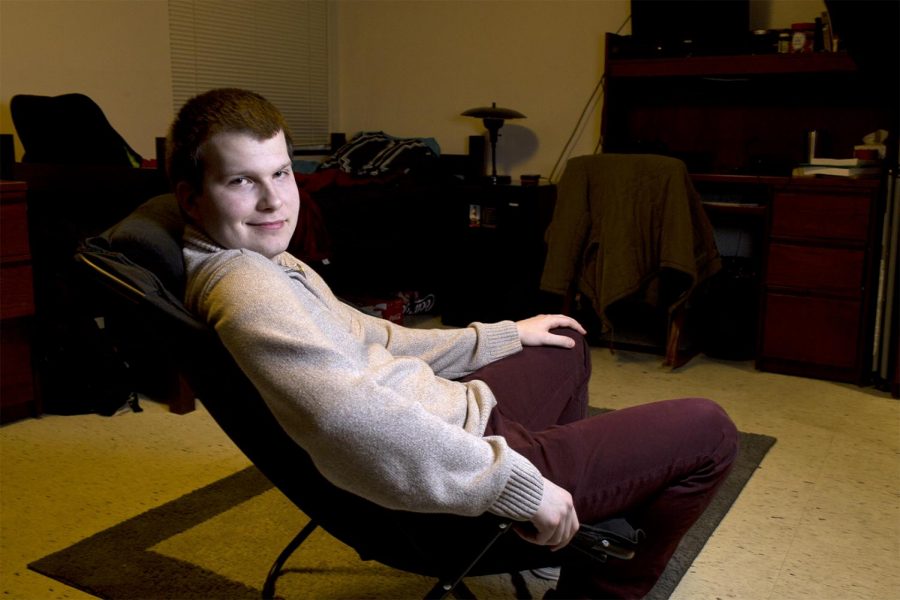 Josh Arend, 22, of Owensboro is a senior creative writing major who lives on campus. Arend stays inMcLean hall and plans to continue living on campus. "I like the convenience of being close to class and events," Arend said.

On any given school day, Sabrina Moll exits her last class and makes a short trip down the Hill, flashing her student ID to the front desk worker at McLean Hall. She enters her room, throws her backpack on the floor and asks herself a question: “Homework or Netflix?” After deciding on one or the other, she later joins her friends for a close dinner on campus.

Moll is a junior from Trimble County. Like some other WKU students, she will be living on campus next year as a senior.

“I’m closer to my classes,” Moll said. “When I inevitably forget something, I can run back and get it. I’m also able to meet my neighbors. When you live in close proximity to somebody, you get to know them better. It’s great to meet friends that way.”

Moll said some people often find it odd that she’s going to live all four years of college in a residence hall.

“I think people sometimes think that juniors and seniors shouldn’t live on campus, and that it’s weird that they do, but they’re no different,” she said. “They’re just a little bit further along in their college career.”

Josh Arend, a senior from Owensboro who also lives in McLean due to his housing scholarship, agreed.

“I have a few friends who have moved out despite having a housing scholarship just because they think that’s what they’re supposed to do,” he said.

Arend and Moll are among several upperclassmen who chose to spend their senior year living on campus because of their scholarships. However, that is not the only reason.

“It’s nice to have everything taken care of,” Arend said. “There’s not a lot of household upkeep because there’s only one room. It’s a lot easier to go over the room with a mop or a broom than clean an entire apartment.”

Arend commented on the ease of access to campus activities.

“I feel like being close has given me a lot of opportunities – even if it’s just going to events that are in walking distance,” he said.

Although he is from Bowling Green, Josh Propst, a senior who has lived in four residence halls, said close proximity has made his schedule easier.

”I actually live closer to Western than I did my high school,” Propst said. Yet, he didn’t choose to live at home.

Propst is involved in WKU’s orchestra and teaches music lessons. With a busy schedule, he said living on campus makes his days more manageable.

“It is super convenient getting to and from classes,” he said. “I roll out of bed and I’m there. Same thing with rehearsals. I get done with rehearsals at 9:30 at night most of the time, and I’m right there at my bed.”

John Treon, an Owensboro senior, lives and works in Zacharias Hall as a resident adviser. He also mentioned the accessibility of the campus.

“When you’re on campus, you’re closer to different resources like clubs and student organizations that are also on campus,” Treon said. “There’s even things happening within the resident halls themselves. We have programs about every week or so.”

Treon said living on campus and being an RA is contributing to his success in his senior year.

“I would encourage underclassmen to look into being an RA if they want to stay [in the residence halls] as an upperclassman. It’s leadership experience and gives more of a connection on the hall,” he said.

Some of the programs to which Treon referred are professional events, which some seniors approaching graduation utilize.

“There are program opportunities, including résumé building and career development events,” said Dee Hawks, hall director for Meredith Hall. “We pride ourselves in being a living learning community, where people can come back and relax, but also continue to learn outside of the classroom.”

Hawks smiled as she talked about the unique portions of Meredith Hall that house mostly upperclassman with sorority ties.

“Within Meredith, we lease part of our space to four different organizations: Chi Omega, Alpha Omicron Pi, Alpha Xi Delta, and Phi Mu,” she said. “They each have a block where they have about 40 women living within the building, and they each have a chapter space where they can host events.”

Despite the occasional comment about small kitchen sizes or having to check in guests, most upperclassmen have positive comments about living on campus for the duration of their undergraduate careers.

“I know I’m never going to get this experience again,” Moll said. “I might as well enjoy it.”

Arend wanted to give a word to underclassmen considering their future living quarters.

“To anyone who is stressing about trying to find an apartment and a job, there’s nothing wrong with living on campus as a senior,” he said. “So, don’t force yourself to move out if you don’t want to, especially if you have a scholarship.”

“I’ve really enjoyed it a lot,” he said. “I love WKU and the campus. It’s been a privilege for me to not just go here but to live on campus and thoroughly be part of this school for four years.”