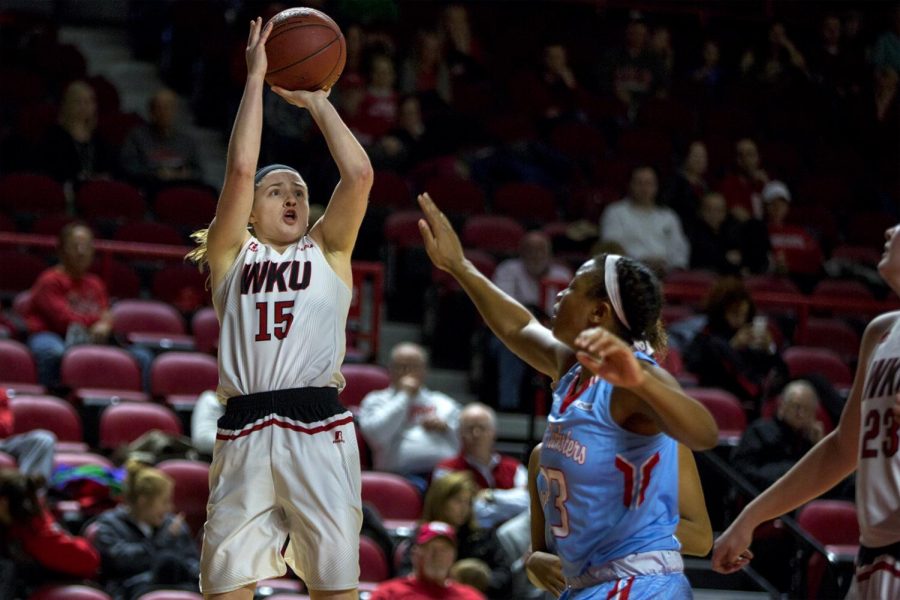 After a heartbreaking loss to Texas San Antonio kept them from holding onto sole possession of first place in Conference USA, the WKU women’s basketball team looked to bounce back Thursday night when they hosted Louisiana Tech.

Similar to the game against UTSA, the Lady Tops led nearly the entire game but had a difficult time pulling away. But thanks to 19 points from junior forward Tashia Brown and eight three pointers as a team, the Lady Tops were eventually able to hold off the Lady Bulldogs by a final score of 67-58.

“It was a very tough victory and I understand in conference play it is always going to be that way,” Head Coach Michelle Clark-Heard said after the game. “I just didn’t feel like we played with the level of energy that we normally play with and I talked to them about that after the game, but the great thing is that we found a way to win. I’ve learned to understand as a coach that it won’t always be pretty.”

It didn’t take long for the Lady Tops to get going. Noble found junior forward Ivy Brown twice underneath early on to give WKU an early 4-0 lead. However, Louisiana Tech’s zone began causing problems for the Lady Tops’ offense. WKU scored just 9 points the rest of the 1st quarter as the Lady Bulldogs took a 16-13 lead going into the second quarter.

“We just couldn’t get going early,” Noble said.“They were very long and active in their zone. They made it hard to get inside and get easy baskets and forced us to take tough shots.”

After a three-minute scoring drought with the game tied at 19, freshman guard Whitney Creech gave the Lady Tops a big spark off the bench. The former Kentucky Mrs. Basketball winner hit back-to-back threes that keyed a 10-4 run that gave WKU a 29-23 halftime lead. After the Lady Tops stretched their lead to seven points late in the third quarter, redshirt senior Micah Jones found Kendall Noble wide open for a three-pointer that gave the Lady Tops a 44-34 lead.

“I think we just mixed up our plays and got some movement,” Noble said about the team’s offense in the second half. “In the first half we were just standing around and moving the ball around the perimeter. We tried to get in the paint a little more and get better looks. When the shots were open, we took them and shot them with confidence.”

However, just when the Lady Tops began to build a cushion, the Lady Bulldogs found a way to hang around. La. Tech kept WKU scoreless for nearly five minutes as the Lady Tops saw their lead dwindle to five points with 6:33 to play. Needing another spark, WKU found it from the three-point line. Jones nailed two threes that helped WKU stretch their lead to 11 points.

“Micah Jones made some huge shots for us that really helped us put them away,” Clark-Heard said. “I was proud of Tashia and Kendall and different players making big shots when we needed them. That’s what it is about. It’s a team effort and a team win.”

La. Tech found a way to get within six with 1:57 to play, but the Lady Tops hit free throws down the stretch and held on for a 67-58 victory. The win keeps WKU tied atop the conference standings with an 8-2 mark. The Lady Tops host Southern Mississippi (14-8, 6-4 C-USA) this Saturday at 2 p.m.

“Southern Miss is going to press more, probably the whole game,” Clark-Heard said. “They’ll play both man and zone. They’ll be all over the place. They’re playing well, they’re playing hard, and they’re playing quick. They’re small but they’re quick. We just have to get back and do the things we need to do.”