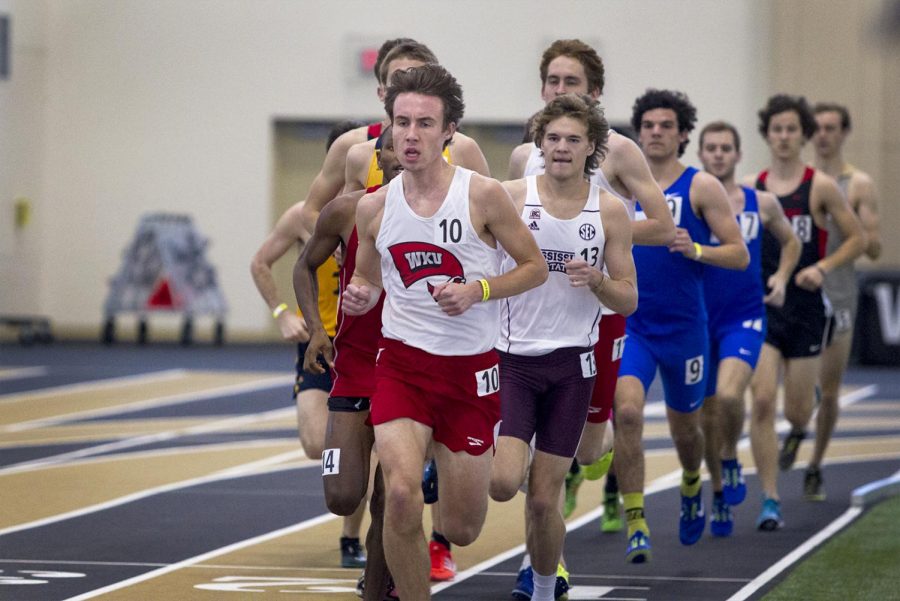 Sophomore Mark Stice, of Sycamore, Illinois, leads the pack during the men's 3000 meter distance event at the Music City Challenge on Saturday, Feb. 11. This was the WKU Indoor Track and Field team's last meet before heading to conference championships.

WKU Track and Field finished off its final meet before the Conference USA Indoor Conference Championships with 13 top-eight finishes and one first-place title.

Julius Morris was the lone Hilltopper to win an event, finishing first in the 200-meter dash. It was his third first-place finish of the year, his second in the last two meets, and the team’s 15th title of the year.

“We had some positive results this weekend,” Head Coach Erik Jenkins said, according to a press release. “This was our final tune-up before the conference championships and I like the direction we are headed.”

The 200-meter that Morris won was an event that the WKU men dominated, as four of the top eight spots were filled by Hilltoppers. Finishing after Morris, William Bush ran a 21.88 to finish sixth, Austin Hayes ran a 21.93 to finish seventh and Eli Minor ran a 21.97 to finish eighth.

Morris and Minor also ran in the 60-meter dash final. Minor finished third with a time of 6.74.

Ventavius Sears, Emmanuel Dasor and Johnathan Hayden all snagged runner-up finishes in their events. Sears’ runner-up placement came in the long jump, as he cleared 7.56 meters. Teammate Desmond Mobley finished eighth in the same event. Dasor finished as the runner-up in the 400-meter race, running a 46.52. It was his second runner-up finish this year. Hayden finished second in the 60-meter hurdles, clocking a time of 8.04.

In addition to his runner-up finish in the long jump, Sears finished fourth in the triple jump, clearing 15.24 meters.

The women’s team pitched in with two top-eight finishes, as Khadijah Valentine finished sixth in the 200-meter with a time of 24.41. Teammates Peli Alzola and Jadzia Beasley both finished in the top-25 as well, in a field of more than 75 runners.

Jenesssa Jackson continued a streak of top-10 finishes, as she finished eighth in the weight throw, marking her sixth top-10 finish of 2017.

While the performances in this week’s meet didn’t quite compare to WKU’s performance in Indiana a couple of weeks ago, in which they won five events, it was still a productive tune-up leading into the conference championships.

With the Music City Challenge behind them, the Hilltoppers are now preparing for the C-USA championships meet. The meet will take place on Saturday and Sunday, Feb. 18 and 19, in Birmingham, Alabama, where the Toppers will look to take home some national championship qualifiers.